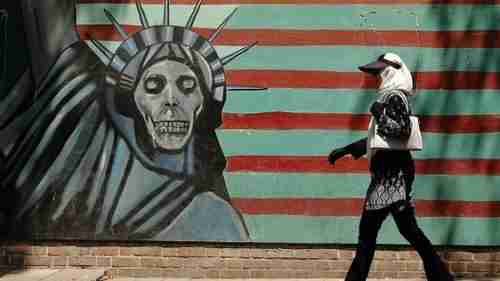 A mural painting on the wall of the former US embassy in Tehran, where the 1980 Iranian hostage crisis originally occurred (AFP)

President Donald Trump on Tuesday issued an executive order reimposing economic sanctions that had been eased by the 2015 nuclear deal. The sanctions target Iran’s automotive industry, the purchase of commercial aircraft and metals including gold, and the selling of Persian carpets.

The action appears to have thrown the European Union into a new level of chaos.

However, these laws have not been particularly effective. Germany’s carmaker Daimler immediately announced a halt to its business activities in Iran. France’s oil and gas giant Total has already indicated it intends to shelve a multi-billion dollar investment in Iran. France’s automaker Renault, which had an 8% share of Iran’s automotive market, announced last week it would comply with the sanctions. Peugeot withdrew in June. More than 100 international companies have also said they would comply.

However, China’s auto companies are rushing to fill the gap left by departing European companies. Chinese cars already have a nearly 10% share of Iran’s auto market, and a 50% share of auto parts imported into Iran. Iran Khodro, Iran’s largest car manufacturer and assembler of foreign cars, recently told its salesmen to promote to customers China’s H30 Cross, made by Dongfeng Fengshen, as a replacement for Renault’s Tondar 90.

Other Chinese car manufacturers present in Iran include Chery and Brilliance, whose H330, assembled in Iran by Saipa, is among the top 10 best-selling cars in the country. China has also lifted monthly oil imports from Iran by 26%. China is the world’s top crude oil buyer and Iran’s biggest customer. RFE/RL and BBC and VOA and Deutsche Welle

Iran’s protesters blame bad economy on Supreme Leader, not on US sanctions

Iran’s economy is in serious trouble. The rial currency has been plummeting against the dollar since May, when the US announced that sanctions would be imposed on August 7.

Since that time there have been growing street protests in cities across the country. However, they’re not anti-American protests, which is something we as Americans have come to expect for decades. Instead, the protests are blaming their own government.

Here’s a list of street protesters chants collected by RFE/RL in the last few days:

“Death to high prices and inflation.”
“We don’t want incompetent officials.”
“Not to Gaza, not to Lebanon. May my life be sacrificed for Iran.”
“Death to the dictator.”
“Our enemy is right here. They lie when they say it’s America.”
“Reza Shah, bless your soul.”
“Iranians, shout out your demands.”
“Police forces, support [us], support [us].”
“Death to Hizballah.”
“Iranians die, [but] they don’t accept abjection.”
“Death to Khamenei.”
“Mullahs must get lost.”
“Don’t be scared, we’re all together.”

If you want to understand what’s going on, the easiest model to keep in mind is the street protests in America in the 1960s and 1970s. Although the several things were protested, they were mainly anti-war protests against the war in Vietnam.

It made no difference what the Nixon administration did. The young protesters were opposed to everything. And it made no difference what Hanoi did either. There was nothing that Hanoi could have done to make the young protesters say, “Gee, maybe Nixon is right. I’m going to support him now.” Violent street protests in Los Angeles and Detroit were blamed on presidents Johnson and Nixon. The 1968 riot at the Democratic convention in Chicago was blamed on Johnson and Nixon. The shootings of students at Kent State College in 1972 were blamed on Nixon.

This is what always happens in a generational Awakening, starting around 20 years after the end of a generational crisis war, in this case World War II. The survivors of the war traumatized by its horrors, and vow to keep it from happening again. The generation that grows up after the war have no personal memory of it, and they turn against the generations of survivors in what’s called a “generation gap”

Exactly the same thing is happening in Iran today. The first major anti-government protest began in 1999, about 20 years after the 1979 Islamic Revolution. Some 10,000 students rioted in Tehran University, chanting anti-government slogans. The police reacted violently, leaving at least 20 people hospitalized and 125 students jailed.

There were sporadic protests every few months after that. The next round of major protests, large enouch to threaten the government occurred after the 2009 presidential election. The violence that followed was bloody and massive. Largely peaceful street protests by hundreds of thousands of mostly young people occurred in Iran’s main cities and provincial capitals, including Tehran, Tabriz, Isfahan and Shiraz. They were met with unrestrained violence by the police and security forces. Dozens were killed, and 4,000 people were jailed. The police particularly targeted journalists and other government critics with widespread torture, beatings, and threats against family members.

A new round of protests began in December 2017, and they’ve been continuing intermittently since then.

And there are plenty of things to protest against, as you can see from the anti-government chants listed above.

That leads to the second major factor: Corruption. According to Transparency International, Iran’s government is among the most corrupt in the world. According to its transparency index, Iran has an extremely low score of 30 out of 100. By comparison, the worst performing region in the world is sub-Saharan Africa, with a score of 32, which is a better score than Iran’s.

Corruption has become so endemic and so bad in Iran’s government that even government officials have been expressing alarm. The reason that Iran is so steeped in corruption can be found in its constitution, which was written by Ruhollah Khomeini, the leader of the 1979 revolution. Khomeini wrote the constitution to give himself and any future Supreme Leader with almost unlimited powers.

Khomeini’s constitution is almost completely lacking in the kinds of checks and balances that the US Constitution is full of — three branches of government, with each branch given specific powers that can be curtailed by other branches of government. Iran has an Assembly of Experts that is supposed to provide oversight to the Supreme Leader, but it never has seriously performed that function. The way the constitution is set up, with no real checks and balances, the only way to succeed in government is to be more corrupt than anyone else. Radio Farda (24-Feb) and Bloomberg and Fox News

The international demand for regime change in Iran

There is a great desire in the West for something called “regime change” in Iran, although it’s rarely specified what that means.

Regime change did occur in America in 1974, with the forced resignation of Richard Nixon. The current Supreme Leader is Sayyid Ali Hosseini Khamenei, 79 years old, born 1939. Many people are hoping that he’ll be replaced soon, although he might live for another 10-15 years. But would that qualify as “regime change”?

Corruption is thoroughly embedded in Iran because corruption is almost demanded by the constitution for survival in government. Real regime change would require a new constitution. Perhaps the Assembly of Experts might form a “Constitutional Convention,” like the one in America in 1787, and lock the participants in a room and not let them up until they come up with a new constitution for Iran, filled with checks and balances. However, there’s little hope for that. In fact, any real regime change may not come for many years.

For almost 15 years, I’ve been saying, based on a Generational Dynamics analysis, that that Iran will be America’s ally in the coming Clash of Civilizations world war.

So that’s a brief summary of the geopolitical linkages. But there’s another way we know that Iran will be an American ally. Iran’s college students have been holding pro-American and pro-Western protests for almost 20 years, starting with the first major protest in 1999. The Iranian regime brutally and violently ended those protests, but they didn’t change minds. Today, those college students are 30-40 years old, moving into positions of power. When the time comes and Iranians are forced to choose, they’ll decide that they’ll have no choice but to side with America and the West. CNBC and Fox News and Slate