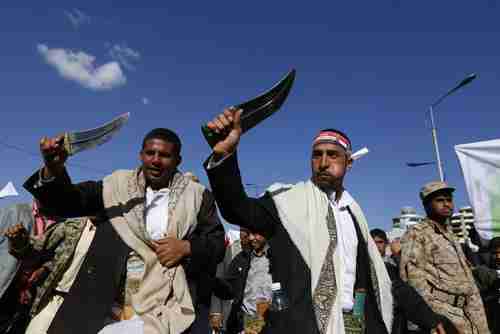 The Saudi Arabia-led military coalition fighting the Iran-backed Houthis in Yemen are claiming that they have cut off the main supply routes connecting al-Hodeidah seaport and city to Sanaa, Yemen’s capital city under control of the Houthis.

The Saudis and their coalition partner United Arab Emirates (UAE) were the targets of intense international criticism after their warplanes killed at least 26 children and four women in al-Hodeidah seaport, and after another airstrike two weeks earlier killed dozens of children traveling in a school bus.

Al-Hodeidah is home to Yemen’s largest seaport and the main gateway for food, fuel, and humanitarian aid to the rest of the country. An estimated 80 percent of Yemen’s commercial supplies go through al-Hodeidah. The Saudi-led coalition has been trying to retake the al-Hodeidah city from the Houthis for the past few months, displacing 470,000 people since June. But it is still home to hundreds of thousands of civilians, half of them children.

Taking control of roads linking al-Hodeidah to Sanaa will mean that supplies the Houthi fighters need will be less available, but it will also cut off food, fuel, medicines, and humanitarian supplies to much of Yemen.

Ms. Lise Grande, the UN Humanitarian Coordinator for Yemen, said in a statement:

Hundreds of thousands of lives hang in the balance in Hodeidah. The situation has deteriorated dramatically in the past few days. Families are absolutely terrified by the bombardment, shelling and airstrikes.

People are struggling to survive, More than 25 percent of children are malnourished; 900,000 people in the governorate are desperate for food and 90,000 pregnant women are at enormous risk. Families need everything–food, cash, health care, water, sanitation, emergency supplies, specialized support and many need shelter. It’s heart-breaking to see so many people who need so much.

The Saudis have said that taking control of al-Hodeidah and the main supply routes would force the Houthis to the negotiating table. Reuters and Save the Children and Relief Web and Al Jazeera

There are reports that Turkey is sending more military aid to anti-Assad rebels in Idlib after a summit meeting last week with Russia and Iran failed to agree to a deal to avert a Syria-Russia assault into Idlib. ( “8-Sep-18 World View — Turkey fails to prevent Russia and Iran from mass slaughter in Idlib, Syria”)

Syria’s president Bashar al-Assad has vowed to take control of every inch of Syria, with no compromise. In previous battles, in Aleppo, Ghouta, and Daraa, his regime joined with Russia to use missiles, barrel bombs, chlorine gas, and Sarin gas to kill the “terrorists” in each territory, following Vladimir Putin’s “Grozny Model.” Entire neighborhoods are flattened, and schools, markets, and hospitals are particularly targeted in order to kill as many women and children as possible.

However, Idlib is different. It has over 3 million people, many of whom fled there from the violence in other locations. They will have nowhere to flee from Idlib, except across the border into Turkey, which Turkey has closed. Turkey is already host to 3.5 million Syrian refugees.

Turkey is desperate to stop the Syria-Russia offensive because it would be a humanitarian disaster in Idlib and because it would be a humanitarian disaster for Turkey. Turkey would be faced with the choice of keeping the border closed and allow al-Assad to slaughter the civilians like trapped animals, or to open the border and permit a million more refugees to enter Turkey and possibly go on from there to Europe, posing a security risk in both places.

This is Turkey’s justification for providing more weapons to anti-Assad rebels in the Free Syrian Army (FSA). According to FSA commanders who have been in talks with senior Turkish officials, said: “They pledged complete Turkish military support for a long, protracted battle. These arms supplies and munitions will allow the battle to extend and ensure our supplies are not drained in a war of attrition.”

The weapons, already spotted in convoys crossing the border from Turkey into Idlib, include large quantities of ammunition and GRAD rockets. Hurriyet/AFP and Reuters and AP