U.K. to challenge Russia in Arctic, at time of tensions over Skripal poisoning 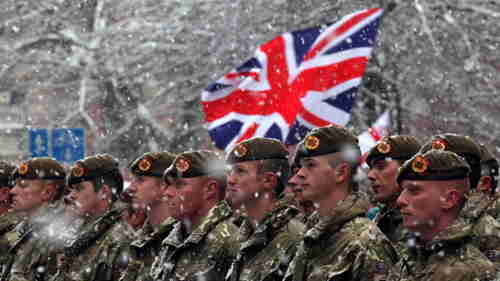 At a time when tensions between the U.K. and Russia are extremely high because of the poisoning of the March 4 poisoning of former Russian double agent Sergei Skripal and his daughter Yulia using a Russia-developed nerve agent Novichok, U.K.’s defense secretary Gavin Williamson on Sunday announced that British armed forces will confront Russia in the Arctic.

Williamson said that Russia was reopening Soviet-era bases in the Arctic and he warned that Britain’s military must assert itself in the newly navigable region.

We see Russian submarine activity very close to the level that it was at the Cold War, and it’s right that we start responding to that.

If we could turn back the clock ten years many people thought that the era of submarine activity in the High North, in the North Atlantic, and the threat that it posed did disappear with the fall of the Berlin Wall. This threat has really come back to the fore. If we want to be protecting our interests in what is effectively our own back yard, this is something we need to be doing.

Well, the Berlin Wall fell 30 years ago, not ten years, but who is counting?

As the ice melts and new shipping routes emerge, the significance of the High North and Arctic region increases.

Russia, with more submarines operating under the ice and ambitions to build over 100 facilities in the Arctic, are staking a claim and militarising the region. We must be ready to deal with all threats as they emerge.

Britain is planning to open a new military base in the northern part of Norway and deploy 800 Royal Marine and Army troops to the country every winter for ten years from 2019. They are to operate with the U.S. and Dutch troops there. Together with 3,000 commandos, sent to take part in the NATO drills, the total number of the deployed troops will top 40,000. In addition, four Royal Air Force Typhoon fighter planes will patrol Icelandic Skies.

“Our Poseidon aircraft submarine hunters, based in Lossiemouth, will track Russian submarines. They will keep us safe at home and assist our NATO allies,” said Williamson. That should be reassuring. Daily Mail (London) and UK Government and Sputnik News (Russia)

Russia says that the U.K. violates its commitment to the Arctic Council

Russia’s embassy in London criticized Britain’s announcement, promoting the idea of a threat from Russia. In fact, Russia claims that Britain is violating its own policy statement as an observer at the Arctic Council. According to a spokesman:

These speculations are yet another attempt to promote the idea of military build-up in the Arctic under imaginary pretexts. They run counter to the existing international legal framework and completely undermine huge efforts undertaken in the Arctic Council, where the UK is an observer state.

We hope the British media notices the impressive prospects for trade, economic and infrastructural cooperation in the Arctic and stops echoing those who can’t wait to engage in saber-rattling in this part of the globe.

According to the U.S. State Department:

Established by the Ottawa Declaration in 1996, the Arctic Council is the preeminent intergovernmental forum for addressing issues related to the Arctic Region. The members of the Arctic Council include the eight countries with territory above the Arctic Circle (Canada, Denmark, Finland, Iceland, Norway, Sweden, the Russian Federation, and the United States) plus six Permanent Participants (PP) groups representing the indigenous people of the Arctic, which include Aleut International Association, Arctic Athabaskan Council, Gwich’in Council International, Inuit Circumpolar Council, Russian Arctic Indigenous Peoples of the North, and Saami Council. The Arctic Council is not a treaty-based international organization but rather an international forum that operates on the basis of consensus, echoing the peaceful and cooperative nature of the Arctic Region. The Council focuses its work on matters related to sustainable development, the environment, and scientific cooperation; its mandate explicitly excludes military security. Traditionally, the Council is chaired by the foreign minister of the country holding the chairmanship. Its day-to-day work is carried out by the eight Senior Arctic Officials (SAO) and six PP representatives, with input from working groups, expert groups, and task forces.

Although the mandate of the Arctic Council specifically excludes military security, Russia claims that an observer state like the U.K. must “recognize Arctic States’ sovereignty, sovereign rights and jurisdiction in the Arctic,” and that the U.K. Foreign Office specifically committed to doing so in 2013.

From the point of view of Generational Dynamics, Russia and Britain are not headed for war. Historically, the Russians love the British and the British have no particular ill feelings towards any Russians except Putin and his cadre of officials who are going around poisoning people on British soil with the nerve agent Novichok. However, Eastern Europe is extremely volatile and it is possible at some point that Russia will be involved in a war with Ukraine or other east European countries, as has happened many times in the past few centuries. For that reason, Britain’s decision to set up a new military base in northern Norway could be quite significant. Russia Today and US State Dept. and Arctic Council and Sputnik News (Russia) and Daily Express (London)