Marine Corps Gen. Kenneth F. McKenzi provided a briefing in which he described the planning, approval, and execution of the raid. He said the team was staged in Syria and launched against Baghdadi’s compound, located about four miles from the Syria-Turkey border, a hiding place Baghdadi chose to “avoid the intense pressure that had been put on the Islamic State in other areas of Syria.”

McKenzie said the plan “accounted for the assumption that we would find multiple children at the objective,” as indeed proved to be the case.

The strike team journeyed to its objective by helicopter, protected by “attack choppers, unmanned strike aircraft, and fourth- and fifth-generation fighters.” They took fire from ground forces McKenzie did not identify, although he said they most likely were not members of the Islamic State. Whoever they were, the U.S. team eliminated them with its attack helicopters.

Later in the briefing, McKenzie speculated these armed ground forces were members of “other militant groups in the area” who might have mistaken the raid for a Turkish, Russian, or American operation that threatened their interests instead of ISIS. He estimated that ten to fifteen of these fighters were killed by the strike team.

The American assault force was able to surround the compound and persuade some of its inhabitants to surrender peacefully. 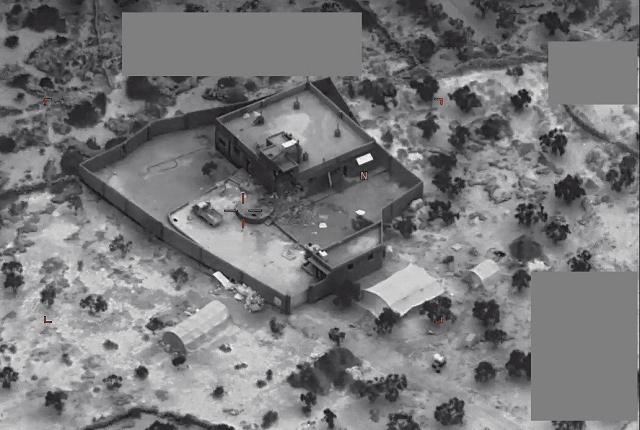 “U.S. forces detained and later released the noncombatants. The group was treated humanely at all times, and included 11 children,” McKenzie said.

The compound also proved to house five ISIS members, one male and four female, who “did not respond to commands in Arabic to surrender” and “continued to threaten the force.” McKenzie said they were “behaving in a threatening manner with suicide vests approaching the raid force.” They were killed without any casualties on the American side.

“I want to make it clear that despite the violent nature of the raid and the high-profile nature of this assault, every effort was made to avoid civilian causalities and to protect the children that we suspected would be at the compound,” McKenzie said.

Baghdadi himself was found hiding in a tunnel with two of his children, both believed to be under the age of 12. He killed himself with a bomb he was wearing to avoid capture, murdering the children in the process. His remains were collected by the strike team for DNA verification.

The team then used precision weapons to destroy the compound, which McKenzie colorfully observed “looks pretty much like a parking lot with large potholes right now.” 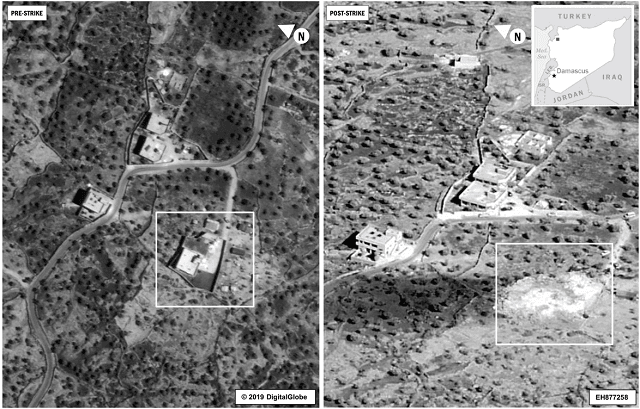 Photo of Baghdadi compound before and after strike, courtesy of U.S. Defense Department

“The operation was exquisitely planned and executed. It demonstrates the United States’ global reach and our unwavering commitment to destroy ISIS, bring its leaders to justice, and to protect America and others from people like Baghdadi. The mission was a difficult, complex and precise raid that was executed with the highest level of professionalism and in the finest tradition of the U.S. military,” he said.

“This was a U.S.-only operation. There were no other nationalities that participated in it,” he specified.

McKenzie also mentioned the military dog who has become a subject of great interest by the American public and media, for somewhat different reasons:

U.S. Special Operations Command military working dogs are critical members of our forces. These animals protect U.S. forces, save civilian lives, separate combatants from non-combatants, and immobilize individuals who express hostile intent. This dog is a four-year veteran of the SOCOM K-9 program and has been a member of approximately 50 combat missions. He was injured by exposed live electrical cables in the tunnel after Baghdadi detonated his vest beneath the compound. I will also note he has been returned to duty.

McKenzie was asked about President Donald Trump’s description of Baghdadi’s final moments as the once-feared terrorist leader “whimpering and crying.”

“I can tell you this:  he crawled into a hole with two small children, and blew himself up while his people stayed on the ground, so you can deduce what kind of person it is based on that activity,” McKenzie replied, adding that he was not at liberty to discuss any further operational details.