The U.S. government seized the websites on Tuesday without fanfare or explanation, their front pages replaced by a warning notice from DOJ and the U.S. Commerce Department. The first shuttered website to be widely noticed belonged to Iran’s state PressTV news service. Other seizures were reported throughout the afternoon.

DOJ said it acted on an October 2020 notice from the U.S. Office of Foreign Assets Control (OFAC) that said IRTVU is controlled by the Islamic Revolutionary Guard Corps (IRGC), the theocratic wing of the Iranian military and a U.S-designated terrorist organization.

Kataib Hezbollah is also a designated terrorist organization and a client of the IRGC. KH was responsible for attacks on U.S. forces in Iraq, including a rocket attack in December 2019 that killed an American military contractor. KH founder Abu Mahdi al-Muhandis was killed in the same U.S. airstrike that eliminated IRGC Gen. Qassem Soleimani in January 2020. 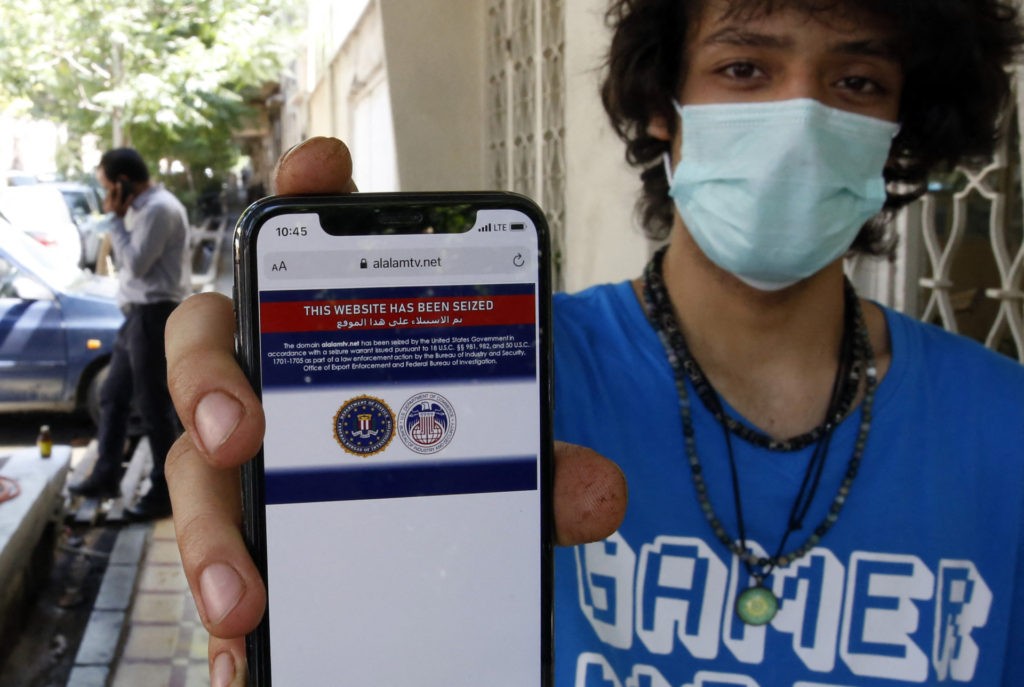 An Iranian youth shows on his mobile phone a statement declaring the website of Iran’s Arabic-language channel Al-Alam “has been seized by the United Government”, on June 23, 2021. Tehran warned that Washington’s seizure of 33 websites run by Iran-linked media was “not constructive” for ongoing talks on bringing the U.S. back into a landmark nuclear deal. (AFP via Getty Images)

DOJ said all 36 of the seized web domains were owned by American companies and utilized by IRTVU and KH without obtaining the necessary licenses from OFAC.

“These website seizures were investigated by the U.S. Department of Commerce’s Bureau of Industry and Security, Office of Export Enforcement and the FBI. The National Security Division’s Counterintelligence and Export Control Section prosecuted the seizure,” said Tuesday’s DOJ statement.

PressTV said on Wednesday that its website, along with the website of its Arabic-language branch Al Alam, were able to resume operations under Iranian domain names.

PressTV complained it has been accused of violations by American tech companies “more than any other Iranian outlet, given the expanse of its viewership and readership”:

In March, Google for the seventh time blocked the English-language news network’s access to its official YouTube account without any prior notice, citing “violations of community guidelines.”

The US-based social media giant Facebook also informed Press TV in the same month that its account had been shut down for what it claimed to be the Iranian news channel’s failure to “follow our Community Standards.” The page was reinstated a few days later.

The Tehran-based English-language news network has repeatedly fallen victim to censorship on multiple fronts, including Twitter and Instagram besides Google and its services.

The “Supreme Political Council” of Yemen, whose al-Masirah TV news website was among those seized, took a similar tone. PressTV quoted the council without noting that it is not a legitimate government body – it is a creation of the Iran-supported Houthi insurgency, which displaced the internationally-recognized government of Yemen in 2014, and also controls the al-Masirah network.

“The seizure of the media sites by America proves they have managed to get their messages across. Independent channels have worried the regimes which deceitfully claim to be advocating and fighting for freedom of expression,” council member Mohammed Ali al-Houthi said on Tuesday night.

“The move unmasked the true nature of the so-called advocates of democracy, and exposed their mottoes. America is hell-bent on outright confrontation,” he added.

The Houthi insurgents of Yemen condemned the seizure of al-Masirah’s website as “American piracy and copyright confiscation.”

Other websites seized by the U.S. government included the Lualua TV network, run by Bahrain’s Iran-supported opposition from offices in London and Beirut; Palestine al-Youm (Palestine Today), a TV station linked to the Iran-supported Islamic Jihad terrorist organization; Karbala TV, the official TV station of the Shiite shrine in Karbala, Iraq; several satellite television stations with audiences in Iraq; and Nabaa TV, a Libyan network that was designated as a terrorist operation by the governments of Egypt, Saudi Arabia, the United Arab Emirates, and Bahrain in 2017.

Mahmoud Vaezi, director of the Iranian presidential office, said on Wednesday the regime will use “all international and legal means” to condemn “this mistaken policy of the United States.”

“It appears not constructive when talks for a deal on the nuclear issue are underway,” Vaezi added.