Lungu was defeated in a landslide election last month by opposition leader Hakainde Hichilema, who said soon after his election that he suspected Zambia was much deeper in debt to China than Lungu was prepared to admit.

Corruption was one of the major campaign issues for Hichilema, a self-made business tycoon who rode a wave of frustrated young voters to victory in August after five unsuccessful attempts at the presidency. Hichilema, who faced physical persecution from the incumbent president during his previous runs, jovially promised not to have Lungu tear-gassed in retaliation during his victory speech.

Zambia’s youth grew increasingly concerned about their country’s massive debt to China, which has been hooking Third World countries on unsustainable loans through its Belt and Road Initiative (BRI).

When Zambia’s soaring external debts made sources like the International Monetary Fund (IMF) nervous about loaning it more money, China stepped in with wads of cash and only one ironclad demand: that Lungu keep the details of Zambia’s Chinese loans secret from both his own people and the international community.

“As southern Africa’s third-largest economy and Africa’s second-largest producer of copper, Zambia is a textbook case of the Chinese debt trap that affects 15 African countries, including Djibouti and the Democratic Republic of the Congo,” the UK Guardian observed in December 2019, in an article that noted there were already growing concerns that Lungu was concealing the true size of his extravagant Chinese loans. 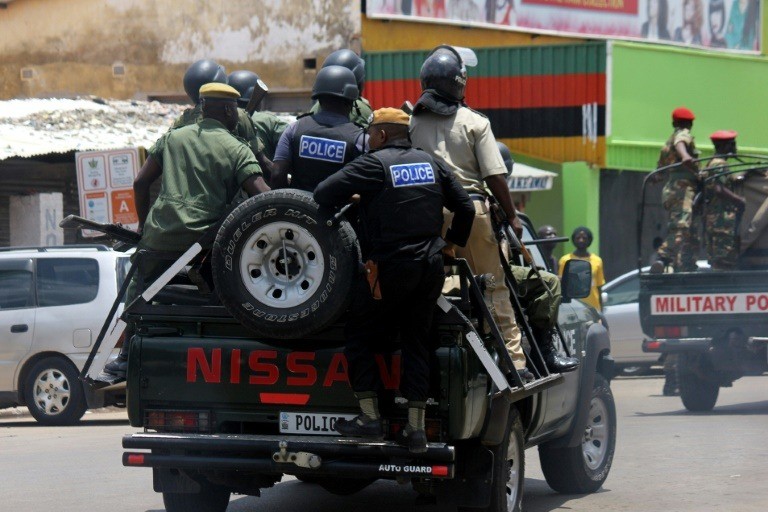 The Guardian chastised the IMF and World Bank for not doing more to stop Lungu from going madly into debt with Chinese banks, although it also conceded Zambian officials were no longer listening to the IMF, dismissing its warnings as “disinformation.”

Zambia’s debt spiral came to ruin in November 2020, when it became the first African nation to default on its sovereign debt. As with so many events on the grim calendar of 2020, analysts blamed the coronavirus pandemic for accelerating the country’s fiscal collapse… but none doubted another virus from China, those gigantic Belt and Road loans, were the burden that broke Zambia’s back.

As the International Bar Association (IBA) explained in December 2020, the opacity of Belt and Road loans made it difficult for new African governments to renegotiate bad deals made by their predecessors, and almost impossible to convince other lenders and investors to put money into economies corrupted by Chinese loans.

China’s BRI loans sometimes include secretive provisions that allow China to take control of national assets if the borrowers default, as most infamously occurred last year in Sri Lanka, which was forced to give China control of its vital Hambantota Port for 200 years. Other investors and lenders are understandably reluctant to bet big money on assets that could be seized by Beijing at any moment by invoking landmine clauses in its secretive loan deals.

Another problem was that China’s coronavirus pandemic was absolutely brutal on the type of industries that were usually supported by Belt and Road loans, choking off revenue streams that were already underperforming.

The IBA blasted short-sighted and selfish African leaders for leaving their successors saddled with Chinese loans they could never repay, pointing to Zambia as an especially egregious example because it ran up its Beijing-issued credit cards only a few years after it cried poverty and persuaded other creditors to write off much of its debt:

‘No one is actively talking about African governments’ own culpability in all of this,’ says Nankunda Katangaza, Vice-Chair of the IBA African Regional Forum and a partner at Hook Tangaza in London. ‘It’s almost as if they are incidental to this vicious cycle of lending and borrowing which led to them becoming highly indebted countries again, a few short years after previous debt was partly forgiven, largely forgiven or restructured.’

‘Those governments absolutely must be held accountable by their citizens for their reckless actions in taking out such enormous debts when they knew they had only just been forgiven,’ adds Katangaza.

She cites the example of Zambia, which had its debt written off in the mid-2000s under the Heavily Indebted Poor Country Initiative – where rich lending nations extended some debt relief to the most indebted poor countries – only to immediately pursue additional debt, buoyed by a ‘stable outlook’ sovereign credit rating from Fitch.

In addition to establishing the true size of those debts at $6.6 billion, CARI argued that Zambia became an “extreme case of principal-agent problems in Chinese lending” – meaning that China loaned Zambia money that was largely spent on work performed by Chinese contractors.

CARI argued previous Zambian administrations borrowed irresponsibly for huge projects that were not planned wisely, confident they could always convince their creditors to take another “haircut” and forgive some of their loans.

The worse Zambia’s economy became, the more Lungu borrowed from China, and the less willing he became to discuss the terms of those loans:

Between 2000 and 2009, Chinese lenders financed only nine infrastructure projects; the average project size was US$ 56 million. However, between 2010 and 2019, Zambia and its state-owned enterprises (SOE) entered into at least 53 different loan contracts with Chinese funders, totaling US$ 8.6 billion. The average Chinese project size grew to US$ 172 million. Furthermore, in 2012, 2014, and 2015, Zambia issued three Eurobonds totaling US$ 3 billion, with interest rates as high as 8.97 percent.

Under the government of Edgar Lungu (2015-2021), as copper prices were falling, Zambia ratcheted up Chinese borrowing (Figure 1), while clamping down on public disclosure. By September 2017, the International Monetary Fund (IMF) had labeled Zambia at “high risk” of debt distress. In June 2018, Lungu announced that unfinished projects would be suspended, aside from several priority projects, and Zambia would sign no new loans.

Despite this, Chinese lenders committed at least US $1.34 billion in new funding in 2018, half of all the new loans signed by the central government that year, and agreed to fund the construction of army barracks for US$ 187 million in 2019. Voters wait in a queue at a polling station during the elections in Lusaka, Zambia, Thursday, Aug. 12, 2021. President Edgar Lungu, 64, and the 59-year old businessman Hakainde Hichilema are frontrunners in a field of 16 presidential candidates. National Assembly and local government seats are also being contested.(AP Photo/Tsvangirayi Mukwazhi)

Hichilema’s finance ministry on Tuesday said its figures were “broadly consistent” with the CARI estimate, and said all stakeholders “have received more detailed data on the makeup of the public debt” under the new administration.

The Africa Report said in April that Zambia’s example was making more Africans nervous about their huge Chinese debts, since those loans are usually “very large and conditioned by signatories’ commitments not to fully disclose their terms.”

“An increasingly large swath of Africans deeply resent that decisions regarding project selection and design, the configuration of workers employed, and financing terms for Chinese projects, cater only to the interests of the continent’s political elite. They thus correctly view the BRI as exacerbating deep pre-existing domestic social and political stratification on the continent,” The Africa Report noted.