Chinese government media outlets condemned the U.S. baby formula market, in some cases citing American media, this weekend for not allowing more imports amid a crippling shortage that has resulted in infant hospitalizations nationwide.

The People’s Daily, the official newspaper of the Communist Party of China, claimed in a piece published in English on Saturday that “Donald Trump administration’s efforts to protect domestic formula producers” were partly to blame for acute shortages of the product nationwide, in some areas resulting in the depletion of up to 40 percent of stock. The propaganda outlet cited the pro-big business Wall Street Journal as supporting its position.

In a column on Thursday, the Global Times, another government propaganda outlet, called policies to protect American manufacturers “the root cause of the formula crisis” and called on America to “expand infant formula imports.”

Chinese parents have struggled in recent memory to acquire safe, legitimate infant formula products in the face of numerous scandals – from corrupt hospitals conspiring with pharmacies to profit from the sales of fake formula to local stores selling nutritionless fake formula powders to formula laced with the toxic chemical melamine killing children.

“With only four major manufacturers of formula in the United States today: Mead Johnson, Abbott, Nestle, and Perrigo, some 40 percent of the nation’s baby formula has been out of stock recently, causing new mothers to hunt from store to store to feed their infants,” the People’s Daily – citing another Chinese state news agency, Xinhua – relayed on Saturday, using the Wall Street Journal to make the case for importing foreign baby formula into the United States. 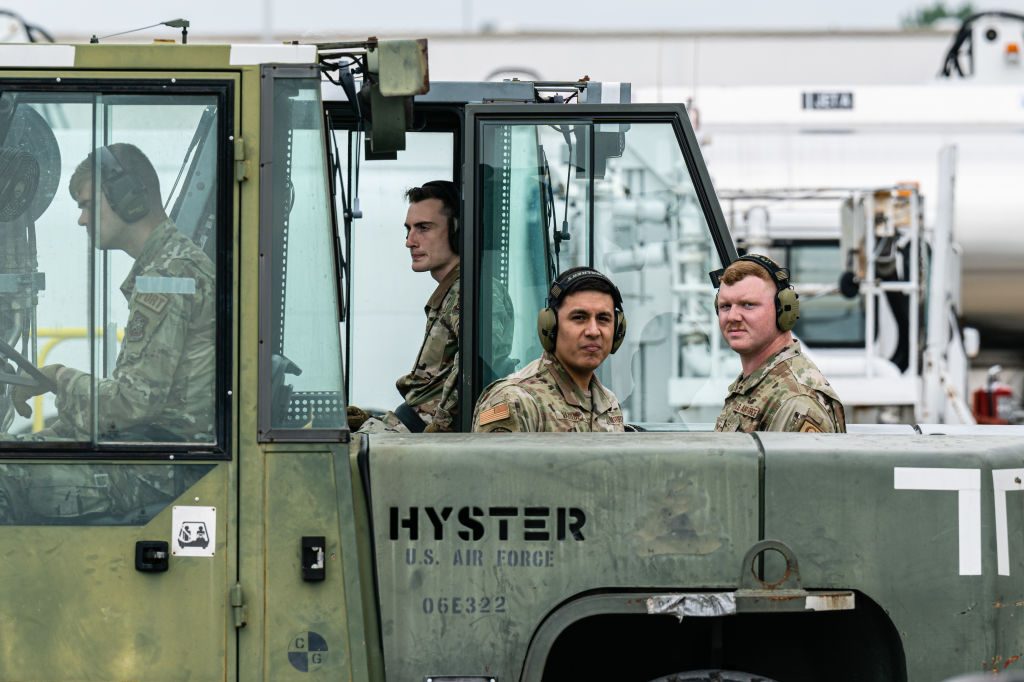 Airmen operating forklifts wait to unload a U.S. Air Force C-17 carrying 78,000 lbs of Nestlé Health Science Alfamino Infant and Alfamino Junior formula from Europe on the tarmac of Indianapolis Airport on May 22, 2022 in Indianapolis, Indiana. The mission, known as Operation Fly Formula, is being executed to address an infant formula shortage caused by the closure of the United States largest formula manufacturing plant due to safety and contamination issues. (Jon Cherry/Getty Images)

‘One reason the market is so concentrated is tariffs up to 17.5 percent on imports, which protect domestic producers from foreign competition,’ said The Wall Street Journal last week,” the Chinese outlet amplified, “citing the Donald Trump administration’s efforts to protect domestic formula producers by imposing quotas and tariffs on Canadian imports in the United States-Mexico-Canada Agreement trade deal.”

The Global Times far more aggressively condemned the United States for its measures to keep unsafe foreign baby formula products out of the country, calling that “the root cause of the formula crisis” on Thursday.

“The US had a long history as a protectionist country, with former US President Donald Trump making protectionism a high priority. Now, an industry-wide infant formula shortage offers a window to observe the impact of trade protectionism on certain industries,” the Global Times, often China’s most belligerent English-language mouthpiece, asserted.

Another state is reporting that American children are facing hospitalization because of a shortage of baby formula. https://t.co/XutrTlrkde

“The US could have avoided the infant formula crisis if the policymakers withstood pressures from trade protectionism over recent years,” the Chinese propaganda outlet concluded, comparing China favorably to the United States.

“As the US deals with a baby formula shortage, China maintains a balance in supply and demand in its domestic formula market. China has become one of the largest markets for infant formula in the world,” it asserted. “Hopefully the US can also join the global competition and solve its formula crisis as soon as possible.”

The Global Times notably omitted a major reason China, despite having some of the world’s lowest birth rates, is one of the biggest consumers of foreign baby formula products: its domestic offerings have repeatedly sickened and killed babies.

In 2004, 50 babies died and dozens of others faced serious health problems after families accidentally purchased “fake” baby formula with no significant nutritional value, resulting in the children effectively starving.

“According to Chinese media, up to 200 babies who were raised on the formula in Anhui province in eastern China have developed ‘big-head disease’ – a symptom of acute malnutrition describing the lack of flesh on the torso and limbs, which appear to shrink in comparison with the cranium,” the U.K. Guardian detailed at the time. “Many parents, most of them impoverished farmers, were unaware that the problem was related to malnutrition. In some cases the babies died after just a few days of being fed on products with little more nutritional value than water.”

Four years later, the rampant presence of the toxic chemical melamine in baby formula products resulted in the deaths of three babies in China and illness in as many as 300,000 babies nationwide. Formula companies, investigators later found, were intentionally adding melamine to the formula so that it would pass government regulations for the amount of protein required in a legal formula product.

In 2012, China’s Yili Group formula manufacturer was found to be selling baby formula with high levels of mercury, which could critically harm a baby’s brain and kidneys.

One Texas restaurant owner is doing all he can to feed the babies in his community amid the baby formula shortage that has swept the nation. https://t.co/WSjHzzteHi

In 2019, police investigated a local pharmacy and hospital in Chenzhou for conspiring to sell parents fake baby formula with no nutritional value. The doctors would advise the parents to purchase it at the pharmacy, resulting in profits for the parents involved and sick and malnourished babies.

A year later, Hunan province uncovered a similar scam in which a local baby store pressured parents into buying a protein drink with no nutritional value for babies, resulting in at least five babies being diagnosed with rickets, a disease caused by vitamin D deficiency.

The repeated scandals have led Chinese parents to seek foreign formula products, often purchasing them or using a traveling buyer to bring them into the country from Hong Kong. As a result, Hong Kong and other neighboring regions have endured supply issues caused by demand that did not correspond to the size of the local infant population.

The demand for foreign formula products has attracted some international companies to China to sell their products, but many have found that the birth rate collapse has made for an insufficiently lucrative market.

“Growth in China’s infant nutrition industry is currently being driven by value and premiumization rather than volume, meaning that the country’s recent shift toward allowing couples to have up to three children is unlikely to have a significant impact on the infant nutrition sector,” the website NutritionInsight observed last year. The site noted at the time that Reckitt Benckiser, a major international formula producer, exited the Chinese market at a $3.5-billion loss that year, selling its local company to a local corporation.

America is currently facing acute shortages of baby formula due to the Food and Drug Administration (FDA) shutting down one of America’s largest factories, a Michigan plant run by Abbott Labs, which makes the Similac line of formula. The FDA claimed to have found a bacterial infection in the factory, prompting a national recall in addition to the end of the manufacture of much of Abbotts’ product.

In America, Abbott, Mead Johnson (which makes the Enfamil line), and Gerber control nearly the entirety of the formula market, resulting in major shortages of competitors’ products once Similac left the shelves. Enfamil has canceled all online sales of formula; most of Gerber’s formula products appear out of stock online at press time.

FDA Commissioner Robert Califf denied the existence of a formula shortage last week, claiming, “there is formula out there, it’s just not in the right place at the right time.” Califf also publicly opposed government use of the Defense Production Act, which President Joe Biden invoked last week to begin emergency manufacture of formula, to address the shortages.

While the Act should allow for more American manufacturing of formula, Biden has in the immediate future begun flying in shipments of foreign formula into distressed parts of the country.