Of course President Obama will deny this. He told Businessweek magazine in a recent interview that he is not anti-business and that he believes in the private sector. But the evidence is overwhelming, and it helps explain why he is pursuing kamakazi-like economic policies that will damage the private sector in America. 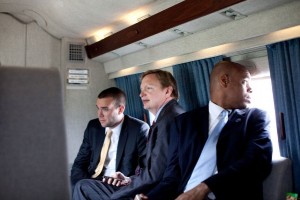 Obama has demonized just about every business sector in America. Through the 2008 campaign to the present, he has gone after credit card companies, the coal industry, mortgage companies, real estate companies, steelmakers, utilities, drug companies, doctors, oil companies, Wall Street, defense contractors, and health insurance companies, just to name a few. In each case he has dinged them for greed, taking excessive profits, and failing to put people first. His criticisms have not been over minor matters but over their basic core functions, and their values or lack of them.

Obama demonstrates almost complete ignorance about the private sector and it’s no wonder: he has so little experience in it. He has spent his adult life in college, teaching college, and organizing communities. The one private sector job he has held, for a consulting firm in New York, he recounts as a terrible experience. In his memoirs he describes the experience as working for a private business “like a spy behind enemy lines.” He also recounts in his memoirs that the multinational corporations in the Indonesia of his youth were propelling the average worker “into deeper despair.” He likened the presence of corporations in his native Africa to a form of “neocolonialism.” Michelle Obama has beseeched young people, “We left corporate America, which is a lot of what we are asking young people to do. Don’t go into corporate America. You know, become teachers, work for the community, be a social worker, be a nurse….move out of the money-making industry, into the helping industry.”

This is, of course, the Obama Cosmology. The private sector is largely populated by devils, who are self-oriented, concerned about personal gain, and unconcerned about others. The government, on the other hand, is made up of people bathed in altruism, whose only concern is you. Thus it is quite easy for Obama to recall the divide between the private and public sector as “enemy lines” even though he would never call the Iranian Mullahs, Hugo Chavez, or Vladimir Putin an “enemy.”

All of this begs the question: does Obama’s demonizing of business simply reflect his lack of experience in the private sector or is it based on a well-thought out analysis? In short, is it based on ignorance or ideology? While we can’t know what Obama’s deeper thoughts actually are, it does seem pretty clear that Obama has at least some sense that the free market is people voluntarily exchanging money for a good or service they want. After all, this is a man who has made millions selling books. Surely he has to understand basic economics? The darker interpretation of this is the Obama knows that the private sector creates wealth and prosperity and that it wages war on it anyway because his ideologically driven agenda is more important to him that the economic health of the country he is supposed to be protecting. Say it isn’t so….