Last week’s Republican Presidential debate confirmed one thing: Texas Governor Rick Perry’s main challenge in winning the Republican nomination will be his ability to explain his record on illegal immigration as governor vs. what he proposes to do about it as President. 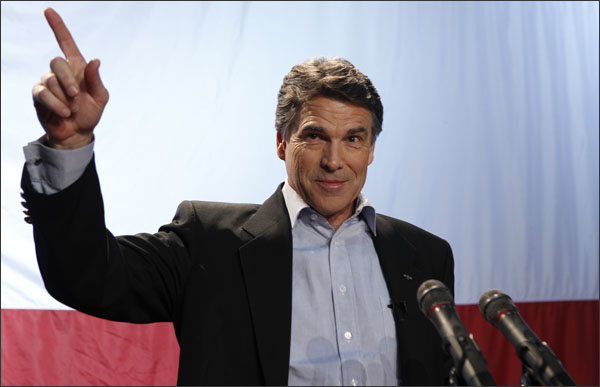 Perry’s opponents have hit him for signing in 2001 the nation’s first law allowing illegal immigrants to get the in-state tuition break that other Texans who attended high school in-state receive. Four lawmakers out of 181 voted against the bill, as Perry has pointed out, making the bill uncontroversial at the time. (Note: as a California lawmaker from 2004 to 2010, I consistently voted against expanding benefits to illegal immigrants.)

Today, 12,138 illegal immigrant students pay in-state tuition in Texas, about one percent of all Texas college students. By comparison, the Department of Homeland Security estimates that 7.0% of Texas residents are in the nation illegally.

Gov. Perry has pointed out more than once, and with a degree of exasperation, that Texas has spent $400 million of its own taxpayers’ money on border security, hiring additional Texas Rangers to better secure the border. Perry has also defended his insistence that a fence not be built along the entirety of Texas’ 1,969 mile border with Mexico, citing the fact that a river runs along the border through some very remote and rugged terrain that is best secured with “boots on the ground” and “aviation assets.” I have to agree with Perry on this one, building a fence along a river is costly while the river itself will constantly undermine the fence’s footings. In addition, Gov. Perry’s Texas has passed a law that requires a photo ID to vote (only 13 other states have photo ID laws on the books) and illegal immigrants cannot obtain a driver’s license in Texas (11 states issue driver’s licenses to illegal immigrants, including Sarah Palin’s Alaska).

Dismissing Texas’ own border security efforts, Perry’s opponents have focused on the in-state tuition, calling the law a magnet for illegal immigration. Theoretically, that’s true. But does it actually impact an illegal immigrant’s decision about what state they may decide to live in? I find it hard to believe a 22-year-old man from central Mexico is going to say to himself, “Hey, I’m going to move to California or Texas because, when my two children become college age in 17 years, I can save some tuition money.” Rather, the decision to break U.S. law more likely comes down to the availability of jobs and the seriousness with which the Federal government secures the border.

To test this proposition, it is instructive to see where illegal immigrants live in the U.S. According to the Department of Homeland Security, the largest illegal immigrant population by state in 2010 was:

But, how do these statistics compare to the size of the state? What percentage of the state’s population is composed of illegal immigrants?

Next, let’s compare the state’s system of welfare benefits to illegal immigrants as well as the state’s in-state tuition policy.

Demand for labor is the driver, with illegal immigrants concentrating in the construction, hospitality, and agriculture sectors. Until recently, both Nevada and Arizona were experiencing housing booms and 27% of Nevada workers labor in the hospitality industry. On the other end of the ledger, both New York and Illinois experienced very little population growth; therefore, saw few construction jobs relative to other states.

It shouldn’t be a shock to conservatives that, just like the wealthy, illegal immigrants respond to state taxes and the impact those taxes have on the economy.

Perhaps if Governor Perry worked to pass a Texas state income tax, the illegal immigrant population there would plummet (of course, he’d have an even bigger challenge in winning the Republican nomination as a tax-hiker).

This brings us to a final observation. Other than raising taxes to the bone-crushing New York level, just how much can a state do in the realm of illegal immigration, a basic Federal responsibility? The answer appears to be not much, given Arizona’s high-profile efforts at curbing illegal immigration and given that Arizona’s per capita illegal immigrant population is greater than that of all states except Nevada.

Having served as a governor is excellent preparation for being President. That said, a governor has different responsibilities than does a President.

Rather than focusing on what education bill Perry signed into law in 2001, Republicans should be more concerned about what policies their prospective nominee has today on immigration, both legal and illegal. Do they approve of an amnesty on the scale of the 1986 amnesty that many Reagan Administration veterans later viewed as a huge error? Do they want to change an H-1B visa program that business sees as a way to keep technical labor costs down but that many highly-skilled American workers see as undermining their ability to earn a good living? How do they propose to better secure the border, and can they do it without eroding Americans’ liberty? These are proper questions for those who would be President and the sooner we can move beyond “gotcha” debate moments and into substantive policy discussion, the better.