You haven’t seen “no-drama” Obama get upset very often in the last four years, but when he does, it’s pretty distinctive. His eyes narrow and fix on an individual. His hand goes to his chin and he becomes very, very still. It’s a glare that could fairly be described as withering.

Only a couple of leaders have earned a Presidential glare, which seems reserved for those who contradict Obama in publicsettings. The first was Rep. Paul Ryan who gave an impromptu rundown of budget gimmicks in the health care bill during a February 2010 summit. Obama did not look at all pleased and broke the protocol of the meeting to offer a several minute long response to Ryan.

The second leader to garner a glare was Benjamin Netanyahu during a joint press conference last May. Netanyahu’s talk seemed to start well with Obama nodding agreement. Then the issue of ’67 borders came up and Obama’s face changed. NPR described the meeting with Netanyahu as “frosty” adding, “The body language was tense. President Obama, his hand resting on hischin, watched Netanyahu intently as he laid down his red lines on keyissues.” 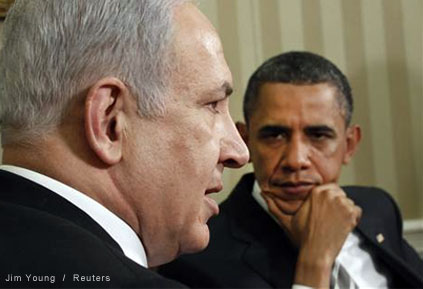 The perceived split with Netanyahu was widely reported at the time. The one with Ryan was only noted by conservative bloggers. With Ryan now on the Romney ticket, the President’s feelings toward the Wisconsin Representative, who has dogged him on budget issues for years, may turn out to be just as important.