The authors of United States History: Preparing for the Advanced Placement Examination have taken it upon themselves to change the Constitution of the United States. The high school textbook contains a summary of each Amendment that alters the initial intent in which they were created.

The textbook notes the Second Amendment as, “The people have a right to keep and bear arms in a state militia.” 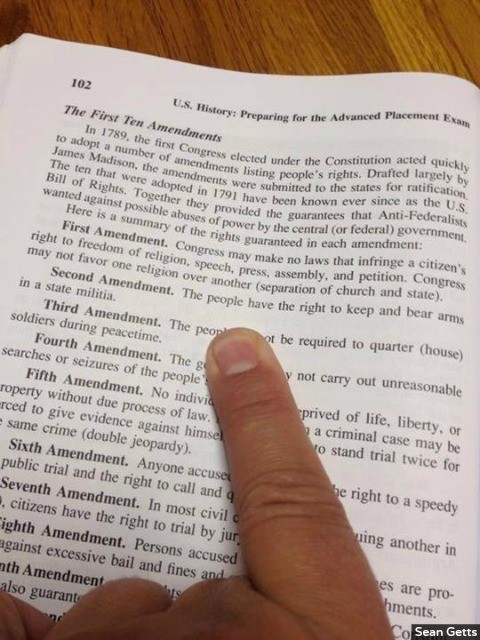 The actual Second Amendment reads, “A well regulated Militia, being necessary to the security of a free State, the right of the people to keep and bear Arms, shall not be infringed.”

Guyer High School and numerous others have assigned the book for an “Advanced Placement History” course. By assigning anti-factual literature, the only advanced placement the school has ensured for their students is in the world of biased academia.

Sadly, parents now have to fact check textbooks to be sure their students are being taught accurate history. High schools and universities should focus on being a marketplace of ideas, not force-feeding leftist theories.

In an effort to remove the textbook from the school’s curriculum, the Daily Paul has created a “Call to Action” plan. They are asking parents and concerned members of the community to attend the next school board meeting and demand answers.

Liberal indoctrination has become a serious threat to academic freedom and we must fight to stop it.