A new Defense Intelligence Agency Memo dated September 12, 2012 demonstrates that high-ranking U.S. officials were aware of claims by an Al Qaeda affiliate that the Benghazi attack was planned 10 or more days in advance.

The memo made public by Judicial Watch indicates that its contents are “not finally evaluated intelligence,” meaning the contents had not been judged to be accurate.  The details of the memo present an alternative explanation for the Benghazi attack that was given short shrift by the Obama administration after the attack. Instead, the State Department and the White House chose to emphasize a “demonstration” (which it turned out had never happened) held in connection with a YouTube video critical of Islam.

The attack on the American consulate in Benghazi was planned and executed by The Brigades of the Captive Omar Abdul Rahman (BCOAR). BCOAR is also responsible for past attacks on the Red Cross in Benghazi and the attack on the British Ambassador, they have approximately 120 members…

The attack was planned ten or more days prior on approximately 01 September 2012. The intention was to attack the consulate and to kill as many Americans as possible to seek revenge for U.S. killing of Aboyahiye ((ALALIBY)) in Pakistan and in memorial of the 11 September 2001 atacks on the World Trade Center buildings.

Aboyahiye is an alternative spelling for the al-Qaeda terrorist Abu Yahya al-Libi. Abu Yahya was a Libyan who at one time was considered a possible heir apparent to Osama bin Laden. He escaped from a U.S. prison and spent several years promoting al Qaeda and was killed by a drone strike in North Waziristan in June 2012. Al Qaeda leader Ayman al-Zawahiri released a video announcing Abu Yahya’s death on September 10, 2012, i.e. timed for the anniversary of 9/11. That video also called for revenge attacks in response to his death.

Though the DIA report is newly revealed, the gist of the information it contains was made public as early as September 13, 2012. At the time, CNN cited a British think tank focused on the Middle East as suggesting “the Imprisoned Omar Abdul Rahman Brigades” were likely responsible for the attack and had been responsible for several prior attacks in Benghazi (including the attack on the Red Cross and the British ambassador). U.S. sources cited by CNN also backed this account, seemingly echoing the contents of the DIA memo.

CNN’s story was followed a couple days later by a widely-circulated report by AFP, which cited an Al Qaeda source saying the attack was in fact revenge for the death of Abu Yahya as called for in the video released by Ayman al-Zawahiri.

So was the attack pre-planned as Al Qaeda claimed, or was it a spontaneous as the White House tried to emphasize? Even now the argument is ongoing. Last week former CIA Director Mike Morell once again downplayed the role planning played in the attack on the Benghazi compound. In an excerpt from his new book published by Politico magazine, Morell says it is a myth that “the attacks were well-organized, planned weeks or even months in advance.” Morell does allow that some of the attackers, “may have been inspired by a call Ayman al-Zawahiri— the leader of al Qaeda in Pakistan—had made just the day before for Libyans to take revenge for the death of a senior al Qaeda leader of Libyan origin in Pakistan.” However, he seems to limit the planning as a result of Zawahiri’s message to know more than a few hours. In his own view the attack on the so-called Temporary Mission Facility took place, “with little or no advance planning, extremists in Benghazi made some phone calls, gathering a group of like-minded individuals to go to the TMF.”

There is no doubt that the State Department and the White House also preferred the demonstration-in-response-to-a-video narrative. The State Department pushed to alter the talking points about the attack such that any mention of prior attacks — which might have suggested a clear and predictable pattern of escalating attacks in Benghazi — was dropped. State Department spokesman Victoria Nuland wrote that “the penultimate point could be abused by Members [of Congress] to beat the State Department for not paying attention to Agency warnings…” Later, after changes were made, Nuland would add “These don’t resolve all my issues or those of my building leadership.” Eventually, all references to prior warnings and attacks was dropped.

Despite the State Department’s best efforts, investigations would find conclusively that the agency failed to stop a preventable attack by ignoring intelligence reports focused on growing militancy in Libya and by failing to upgrade site security despite repeated requests from Ambassador Stevens.

The State Department was not alone in preferring the video explanation for the incident. The White House worked up its own talking points to help prepare Susan Rice for her appearance on a series of Sunday talk shows the Sunday after the attack. The White House document, which was revealed in response to an FOIA request by Judicial Watch, had as its second messaging goal to, “underscore that these protests are rooted in an internet video, and not a broader failure of policy.” 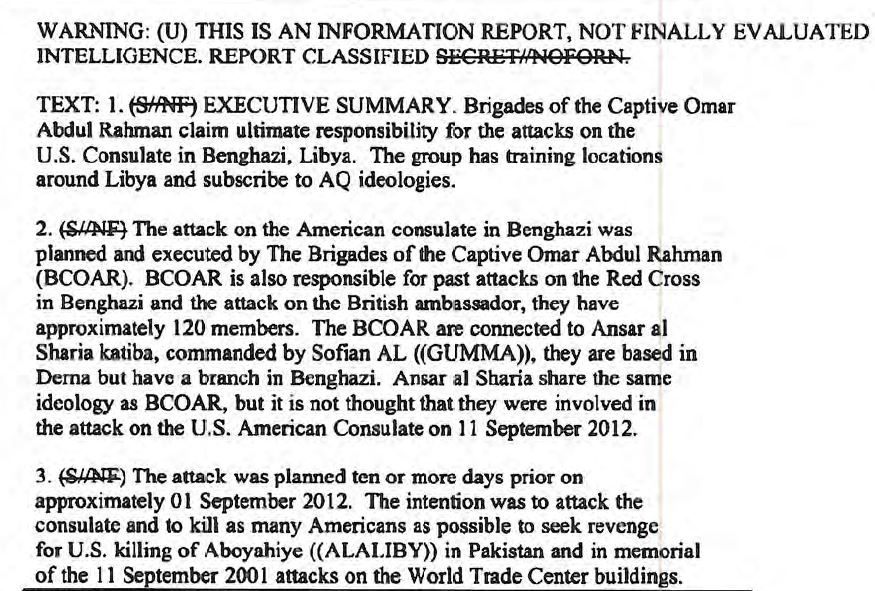