The recent conference held in Cleveland by the Black Lives Matter movement featured a host of classes on community organizing for attendees. One class was on the tactics of the godfather of the modern Democrat Party, Rules for Radicals author Saul Alinsky. The courses demonstrate Black Lives Matter is not merely a disorganized, angry mob, but is at the vanguard of leftist strategy utilizing effective street tactics and buoyed along by a sympathetic Democratic power structure. 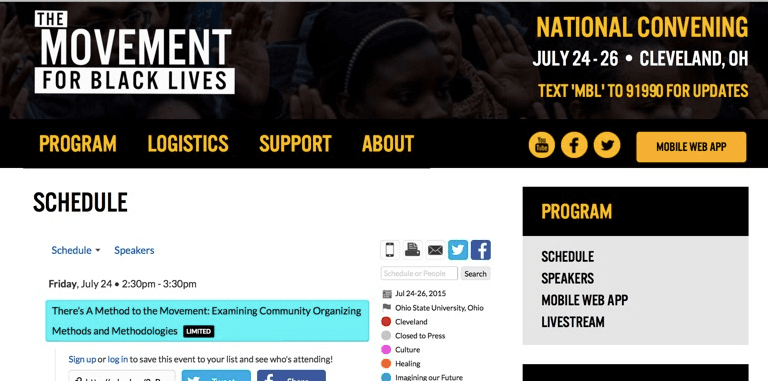 The course listed on the conference program was called There’s A Method To The Movement: Examining Community Organizing Methods and Methodologies.

The workshop will provide a brief overview of community organizing methodologies and methods including Saul Alinsky style organizing, Narrative Based organizing and communal styles of organizing i.e. Ella Baker style and other grassroots models.

Saul Alinsky, who died in 1972, is founder of modern community organizing, and his most famous book is Rules for Radicals. Alinsky’s greatest influence came after his death, where his work has impacted the leaders of the Democrat Party. Presumed Democratic Presidential nominee Hillary Clinton wrote her senior thesis on Alinsky, and President Barack Obama is a community organizer who was was taught in the Alinsky tradition.

That is an not an insult. It’s a completely accurate description but it’s one that the mainstream media would be loathe to use because it would give lie to their narrative that Black Lives Matter, like Occupy Wall Street, is a spontaneous movement that just really wants fairness. Since Black Lives Matter has become a potent political force, the left doesn’t want people to know who they really are or what they actually stand for.

However, the mainstream media is still in denial about the significance of even the “community organizer” label and Saul Alinsky, treating it as some sort of lunatic, right-wing talking point. A commenter at the Washington Post said summed up the left’s feeling concisely:

Alinsky = right wing nutjob code for “I got nothing.” When some right wing birther says that the sane brigade are using “Alinsky tactics” what they’re really saying is “I have no facts or legal arguments to back what I’m saying and that makes me mad.”

However, conservatives like the late Andrew Breitbart were keenly aware of the very real power and influence that Saul Alinsky had on the modern Democrat power structure. The inclusion of a course on Alinsky at a Black Lives Matter conference is just another factual example that shows the work of Saul Alinsky isn’t the product of a fevered GOP imagination, but a vibrant force on the modern left.

However, just as the left dismisses talk about Alinsky, many on the right don’t take the groups influenced by his work as seriously as they should. Some scoff at the idea that Black Lives Matter is anything more than a fringe group, but a closer look shows that it is a serious, well-organized and well-funded movement that uses the time-tested Rules For Radicals tactics to push a Marxist revolutionary agenda. The screaming protest actions like the “burn everything down” shutdown of Netroots Nation aren’t the result of a lack of discipline or learning; they are time-worn tactics that have been proven to be effective.

The course at the Movement for Black Lives conference was taught by Chaka Holley, a woman who is typical of many heading up the Black Lives Matter movement. Ms. Holley is a trained, degreed community organizer. Her LinkedIn resume shows that she has a Masters Degree in Social Work and was a Masters of Divinity candidate. Her work experience includes years at a major community organizing group in (where else?) Chicago called the Samuel DeWitt Proctor Conference. In short, whatever her ideology–and make no mistake, the underlying ideology of Black Lives Matter is vile and dangerous–she is a serious, qualified organizer. The movement is full of people like her.

Anyone doubting that the group is having an impact on the Democrat political landscape should be aware of this announcement that the mainstream DFA group headed by former Vermont Gov. Howard Dean is making Black Lives Matter part of their group, as reported by the Huffington Post:

Democracy for America, an organization that helps elect progressive politicians, will now require candidates to state their positions on the “Black Lives Matter” movement during endorsement questionnaires.

As an organization that is largely white-led and that has a membership that’s predominately white, we feel it’s extremely important that we seize this moment to stand up with the organizers of the Movement for Black Lives in taking structural racism head on,” DFA executive director Charles Chamberlain told The Huffington Post on Monday.

“We had already been working hard to support Black Lives Matter in a number of ways, but it was almost entirely reactive up until this event,” Chamberlain said. “What we think is exciting about what these organizers did and the power of the direct action at the presidential forum was that it helped wake us up to the next stage — to the position where we are taking this on proactively.”

Chalk up another victory for Saul Alinsky.