A male illegal immigrant was forcibly sodomized by multiple armed men after illegally crossing into the U.S. from Mexico, according to a leaked internal document obtained by Breitbart Texas. The source is a trusted federal agent who operates under the umbrella of U.S. Customs and Border Protection (CBP). The victim was from El Salvador and the rape occurred in Arizona. The internal document states that medical professionals confirmed that physical signs existed confirming the rape had occurred.

The Salvadoran victim was walking through a brushy area near Sells, Arizona when he was found by two individuals carrying rifles and handguns.

Under threats of violence the two gunmen proceeded to sexually assault the Salvadoran man before walking off into the brush.

The Salvadoran man called 911 after the rape and Border Patrol agents deployed their BORTAC and BORSTAR teams to search for the gunmen. Other agents arrived to the area and took the man to a local hospital. Agents also notified the Tohono O’Odham Police Department about the rape.

Days after the rape, the Salvadoran man was released from a local hospital and turned over to Border Patrol agents from the Tucson sector.

The federal agent who spoke with Breitbart Texas on the condition of anonymity said the gunmen are likely a team of “rip-off crews” who would have been searching the area for cartel drug smugglers in order to steal their loads. 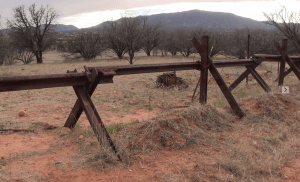 The only physical barrier in most of the Tucson Sector border.

Remote areas of the U.S.-Mexico border are frequently patrolled by armed men with the intentions of ripping off cartel drug shipments. The Tuscon Sector of Arizona sees this more frequently than the eight other sectors of the southwest border, largely due to the area’s remoteness and terrain. The area was the location of the murder of Border Patrol agent Brian Terry, who was also killed by a rip-off crew.