While Fox News found all kinds of candidate peccadillos with which to insert Megyn Kelly into the first Republican debate, it forgot to insert any questions regarding a most critical sector of American life – business and the economy. Strange for a conservative network, but Fox forgot Coolidge’s adage that “The business of America is business,” or even Clinton’s 1992 mantra, “It’s the economy, stupid.” Ah, we but can always fantasize about the foxy Fox girls.

In this upside-down world, the stock market, which is holding up the economy rather than the other way around, is now at a high probability of crashing again for the third time in an unprecedented 15 years. This week the markets dropped six percent erasing, depending on which index you watch, 1.5 to 2 years of gains. Suze Orman and Cramer are already calling for the Federal Reserve to start printing money again. 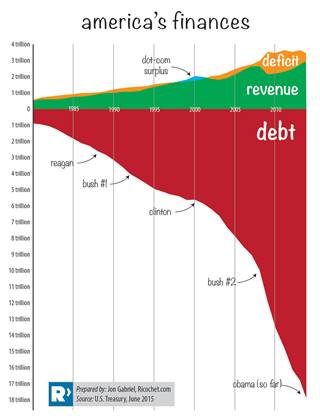 This inevitable fall to earth is because the “what me worry” status quo at the Fed, big banks, big business, and government continue to use, for the fourth time, the same 1987 manipulative play book. Each time they have used this playbook, the market and the economy eventually got hammered in a crash. And each time they did the same thing to push it back up. Unless the electorate vociferously rises up in advance to object, we will again print money, bail out, and bail in. Einstein defined insanity as doing the same thing over and over again and expecting different results; so today we live in an insane world.

In the next two months well over a year ahead of the election the economy is about to become the elephant in the room. September and October are historically bad months for the stock market as the crashes of 1929, 1987, and 2008 attest.

It is important to remember that in March of 2000 the stock market reached its highs and fell all the way into the election The NASDAQ eventually fell by 75 percent, and S&P 500 by 50 percent, between the 2000 top and the 2002 bottom. Then, in October of 2007, the market again rolled over and really crashed going into the election, with the failure of the “too big to fail” banks in September and October of 2008. This time the S&P eventually fell 60 percent by early 2009.

It is critical to note the $700 billion TARP bailout passed in October occurred at the insistence of the status quo of both parties—not the populace. President Bush, with former Goldman Sachs CEO and Treasury Secretary Paulson; both presidential candidates, Obama and McCain; and the leadership of both parties in both Houses of Congress were all for the bailout. Yet with all this pressure from the status quo, the House, closer to the people, as it was up for re-election in just weeks, and sensitive to the negative feedback their offices were receiving, voted against TARP 228 to 205. This kind of dissention between the political class and the people is unprecedented in a Congressional vote. Never has the leadership of both parties been so adamantly for something and the House went the other way. After bribing or intimidating recalcitrant House members and small alterations to the bill, the House passed it on a second vote a few days later.

The TARP bailout was contrary to what both FDR and Reagan did in similar crises where these leaders took the banks into a conservatorship, not receivership, rather than bail them out. The TARP has merely perpetuated “zombie banks” and kept the same “boyz” at the helm to do yet more damage to the economy. We are about to see the fruits of their labor, as no one from that period was ever even indicted.

Little has changed positively to prevent a recurrence. The economic policies of the Clinton, Bush and Obama Administrations have been quite consistent relying upon increasing debt levels and money supply with declining interest rates. Yet economic growth over the same period has declined with the excess debt and regulation, as the working classes and now even the middle class have been decimated.

In the past when the Federal Reserve took the country off easy money steroids, we had crashes. Now, even with steroids, we are likely to have a crash, since the patient continues to need increased doses to perform. These increased dosages are killing the patient. Ask Bernie Madoff if you can run a Ponzi scheme without having continuously expanding levels of new patsies to fleece. This is money printing, and Keynesian economics never works in the end.

The Clinton Administration was the first Democratic Administration to embrace Wall Street money tactics, with ex-Goldman CEO Rob Rubin as Treasury Secretary. Clinton already had the “peace dividend” at his back. He, Rubin, and the Fed used a loosening of credit requirements and regulations on instruments like derivatives, and increased money supply to help Wall Street and stimulate the stock and housing markets after 1995. Then after the Asian and Russian flu, with the internet stock boom taking hold from all the easy money, the world invested in America and dollar rose (similar to today). Capital gains taxes from a high-flying stock market helped to briefly balance the budget. But like all bubbles, this one popped in 2000.

The Clintons made sure Bush got the blame, but there is more than enough for both of the status quo parties.

The incoming Bush Administration relied upon reviving the housing bubble that Clinton started. It used Mortgage Equity Withdrawal (MEW) enabled by dramatically lowered interest rates. When the Fed, much too late, began to raise rates, we began to realize just how badly Boyz of Wall Street had treated the country. Another crash ensued in October 2007. Obama and the press made sure Bush was blamed for the next eight years of Obama’s strikingly similar economic policies. Steady as she goes.

Now the Obama and Fed bubble is from almost six years of Zero Interest Rate Policies (ZIRP), that decimates interest returns for pension funds and retirees just as baby boomer begin retirement. The revival of stock buybacks, that replaced MEW as the chief method to get money sloshing into the economy again, helped artificially push up asset prices. Like in 1998, the dollar is rising, as the U.S. is the last man standing with the rest of world in recession. But with commodity complex and the rest of the world in the tank, the U.S. with its faux economy, including more tech with less productivity improvements can’t hold things up. On its own, the current U.S. economy can’t stand, but with the rest of the world in the tank. As we will see in the next articles, China problems and business-to-business revenues are falling; the dollar is choking off exports, and the consumer looks increasingly tapped out. This is not the recipe for an expansion, unless you’re on drugs or insane, but that we are.

So once again the status quo insanity will produce another crash. This one will be entirely on Obama’s watch, although former Fed chairman Ben Bernanke appears to have made a clean get away and clueless Janet Yellen will take the blame from Obama.

But back to the candidates and debates: The press is whistling past the graveyard, and the voters know nothing about whether the candidates have even thought of what they would do in an economic crisis much like those we have just had. Everyone pretends the problem is solved and like Claud Rains as Captain Renault in Casablanca, the political class will be “shocked, shocked that gambling is going on here!” Since nothing has really changed in the Fed since Alan Greenspan came into the Fed in 1987, and the last three administrations have pursued almost identical failed economic policies, we really should wonder whether any of these candidates will do something different.

So, despite my marked lack of Fox required good gams to show in a short dress, were I to be a crossdressing moderator in the next debate (that alone should get me in), I would ask:

Since we have had an unprecedented two of the largest economic and market crashes in a short 15 \-year time span, and have done nothing but pursue the same economic policies in the that time frame, and the economy remains very weak, as marked by zero interest rates for over five years, what would you do differently, were we to have another market crash and Greater Recession? Be specific, since you can’t lower interest rates, unless you want to charge the people to hold their money, what would you do prevent this from happening a fourth time on your watch?

This crash is baked in the cake. The more politicians understand they will be held accountable, the more we have a chance to stop this Fed-managed wealth transfer from the greater fools to Wall Street and big corporations.