Jackson Hole —  The Jackson Hole Summit by the American Principle’s Project (APP) for sound money made an excellent case that the country would have been better off without the Fed’s style of management for the last 102 years.

The country it replaced as the largest and wealthiest economy, Great Britain, had become the largest and wealthiest economy using the gold standard and a laisse faire Central Bank with no central planning. The book Lords of Finance the Bank of England “was run ljke a club” with the rotating directors  who did little but let the gold do its work. Kwasi Kwarteng conference speaker, British MP, and author of the new book War and Gold, commented that between 1816 and 1899 the UK government ran a deficit in excess of 1% of GNP and in only four years.  During this time the UK was very disciplined in both fiscal and current account deficits.

The two countries succeeded through innovation and hard work during the industrial depending upon the stability of their economies provided by the gold standard, not the temporary steroid induced temporary magic and monetary policy and the sleight of hand of Fed Speak.

In 1913 on the eve of World War I the world was at its highest ever level of global trade to GNP.  It was at this time, after all the heavy lifting had been done, that the Federal Reserve Bank was created to stabilize the already stable US economy and soften or prevent economic downturns.

No one dreamed of leaving the successful gold standard.

Gold was still the backing for the world financial system.  No one, but a few, dreamed of leaving the Gold Standard.

Less than thirty years later in 1971, after President Johnson’s guns and butter strategy for funding the Vietnam War and the Great Society, President Nixon was forced to close the gold window ending the last vestige of the gold standard.  Economists at the Treasury and the Fed, including Paul Volker, future Fed Chairman, expected the suspension to be temporary.

No one expected the United States to stay off the Gold Standard permanently.

As budget deficits and trade deficits ballooned, the United States became the world’s largest debtor nation in less than fifteen years  by the mid 1980s.  China is now the largest creditor.

Today forty-five years after Bretton Woods the US is no longer the world’s largest exporter; it is not largest economy if one uses PPP measurements and the Gold Standard is not longer followed, but rather denigrated by all Central Bankers (as Keynes barbarous relic) wishing to hold onto power.  The world is based in fiat (paper or electronic) money with central banks printing at whim.

Today the only place the Gold Standard is even mentioned is in advertising for premium products.

Worse still, the Fed is no longer even rules based.  Instead we must hang on every word of the Fed Chairman, since they won’t adhere to any logic.

The Fed has capriciously kept interest rates at zero (ZIRP) for a record 80 months and has instituted three bouts of outright money printing (QE).  We have had two large stock market crashes in the first 7 years of the 21st century and are on the precipice of a third in 15 years, and the economy and wage levels refuse to grow.

Conference speaker Professor Lawrence White of George Mason University cited the work of Christina Romer (former head of the Obama Council of Economic Advisors) that the length, severity and frequency of recessions has been no better during the Fed’s management than it was before the Fed.

Even worse than that, the United States, until the 1900’s was a volatile emerging market.  As Dr. Marc Faber has mentioned in his classic book Tomorrow’s Gold, emerging markets have much more volatile economies than do developed nations.  For the US as a developed market to be as volatile as the US as an emerging market, implies that Fed policies are much worse than breakeven.  Looking at the chart below from Prof’s White and Romer of economic output (GDP) volatility, one can see that volatility is, in fact, worse, without even considering the developed/emerging argument.

Even more damning than Romer’s finding is a White Paper by the Fed’s own Vice President Stephen D. Williamson that states, “There is no work, to my knowledge, that establishes a link from QE to the ultimate goals of the Fed – inflation and real economic activity.

Low interest rates and debt increases have created a more fragile economy. They have also increased the divide between haves and have nots to levels only seen before 1929 Crash and Great Depression, also on the Fed’s watch.  Wages for the working class have stagnated particularly in the 21st century, as the wealthy have levered up in these periods of low interest rates and used asset inflation, which the Fed has encouraged, to increase their wealth while the poor with no access to debt gain no benefit. Only those who have access to large amounts of capital and get to use it first, before the rest of us, gain the benefit of increased money or lower interest rates.  Prof White stated “an unhampered free banking system is now hampered by privileges, not restrictions.”

This divergence in income growth is reflected in the chart below presented by conference speaker Rich Lowrie of Put Growth First.  It shows that since Nixon closed the gold window in 1971 and currency backing was eliminated, income growth for the bottom 90% has been flat. To make matters worse divergence of income between rich and poor then increased in the mid 1980s. 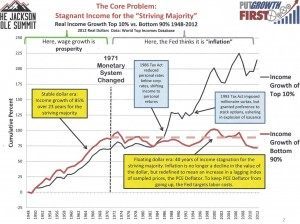 Prof White demonstrated that the Fed has not controlled the areas that it should, or is mandated to control.  Price levels have run away contrary to its original charter to stabilize price levels.  The chart below shows price levels from 1880s until today.  The only stability of price levels is their relatively constant rate of increase which is far above the Fed’s target inflation rate of 2%.  Up until the Federal Reserve was formed prices were essentially stable within a range. That is no longer the case. 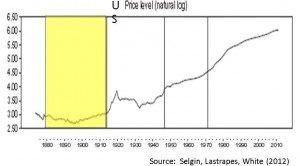 Neither has full employment, a newer Fed mandate, been positively affected either, as is shown below with unemployment rate over 140 years. 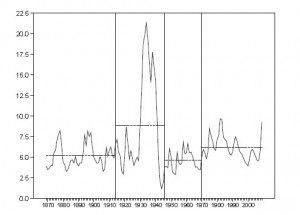 Another key factor not normally understood to negatively affect growth and employment is the increased volatility and uncertainty that the Fed’s monetary policies produce.  This is in addition to the fact that businesses must divine the future from the Fed’s Oracle of cryptic words and academic models.  A company or government can’t invest in the future, or hire employees, if price levels or the future of the economy are uncertain.  We have already seen above from Christina Romer’s work that economic volatility has been higher during the Fed’s reign.  Additionally price volatility raises the investment bar for new investments as well.  Much of this price volatility comes from commodities as well as exchange rate volatility which vary wildly in the bubbly Fed environment induced by monetary manipulation. 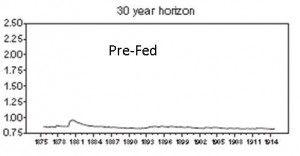 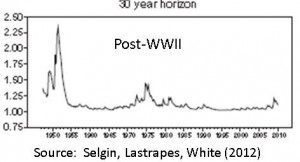 So, Janet, tell me again how well the Federal Reserve is doing and how well going off the Gold Standard has worked?

This reform and many audit reforms could and should be instated or past poor performance will continue.