A senior Republican official is urging Kentucky Sen. Mitch McConnell to resign from his job as the Republican leader of the Senate.

“Mitch is a good and honorable guy, but the base is leaving our party,” Roger Villere, the chairman of the Louisiana GOP, told the Washington Times.

“I’ve worked for 12 years as chairman to build this party, and I just don’t want to see it all go down the drain because the [leaders] aren’t willing to fight for what we believe… Our base is demanding we do something or they’re going to leave us,” said Villare, who also holds a position at the Republican National Committee.

“The GOP brand is being damaged… everybody is so furious at the leadership,” Villere said.

Villere made his statements after posting a Friday message on Facebook: “McConnell needs to resign!!” 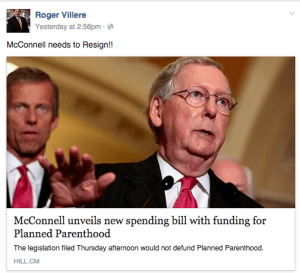 The base’s anger helped push House Speaker John Boehner to announce he will leave Congress at the end of October.

“Honestly, I haven really thought of a replacement… [Villare said] We are being so beat up by the base. I just was frustrated.”

“Mr. McConnell could have suspended consideration of confirmations for all presidential appointees, except for those who are essential to national security, until the president rescinded his unconstitutional executive action on amnesty.”

“This would have been a constitutionally appropriate response to the overreach of the executive branch,” he said. “It would have transformed the political environment, greatly encouraged Republican donors and grass-roots activists, and positioned us to refuse to confirm replacements for any Supreme Court openings that might occur during the remainder of the Obama administration.”

“Not trying to repeal Obamacare, not defunding Planned Parenthood, not trying to stop illegal immigration… That is what Republicans ran on and once they were elected they did not follow up with their promises.”

The governor of Lousiana, Bobby Jindal, has also called for Mitchell to resign. “Here’s what I say in response to Speaker Boehner stepping down: Mitch McConnell, it is now your turn,” Jindal told a cheering audience at the conservative Values Voter Summit on Friday.