CNN failed in their recent effort to promote an online fundraiser for ‘Clock Boy’ Ahmed Mohamed. A donation drive fell far short of its $100,000 stated goal despite the news organization helping to bring worldwide attention to it.

On September 16 LaunchGood, an online “crowdfunding” site for Muslims worldwide, kicked off #IStandWithAhmed, a campaign to raise a $100,000 STEM scholarship, according to CNN Money.

The September 17 article explained how people rallied to support Ahmed “not just on social media but also with their wallets.” LaunchGood’s drive began the day before and hoped to raise $100,000 by an October 13 deadline. CNN pitched the cause du Ahmed with verve, telling the tale of “public outcry on social media and nationwide support” for the teen that included notables like President Obama and Facebook CEO Mark Zuckerberg. The effort came out of the gate strong, raising $10,000 from more than 200 backers in one day, noted CNN Money.

LaunchGood founder Chris Abdur-Rahman Blauvelt told CNN that the Mohamed family approved of the campaign. He said half the money donated would go toward a scholarship fund for Ahmed and the rest to efforts that foster creativity and inventiveness in kids. LaunchGood credits the project to Kyle Smith, a Dallas business co-owner who identifies as a Christian and places a “huge value on Inter-Faith relationships and action.” LaunchGood posted: “Covered on CNN, spread the word!” in one of numerous promotional tweets.

The donation drive fizzled, though, ending Tuesday with LaunchGood meeting only $20,045 of that $100,000 stated goal. However, the LaunchGood #IStandWithAhmed page proclaimed success, which is easy because the intended goal now reflects a much more modest $20,000. According to their newly embedded image, they exceeded their goal by $45. 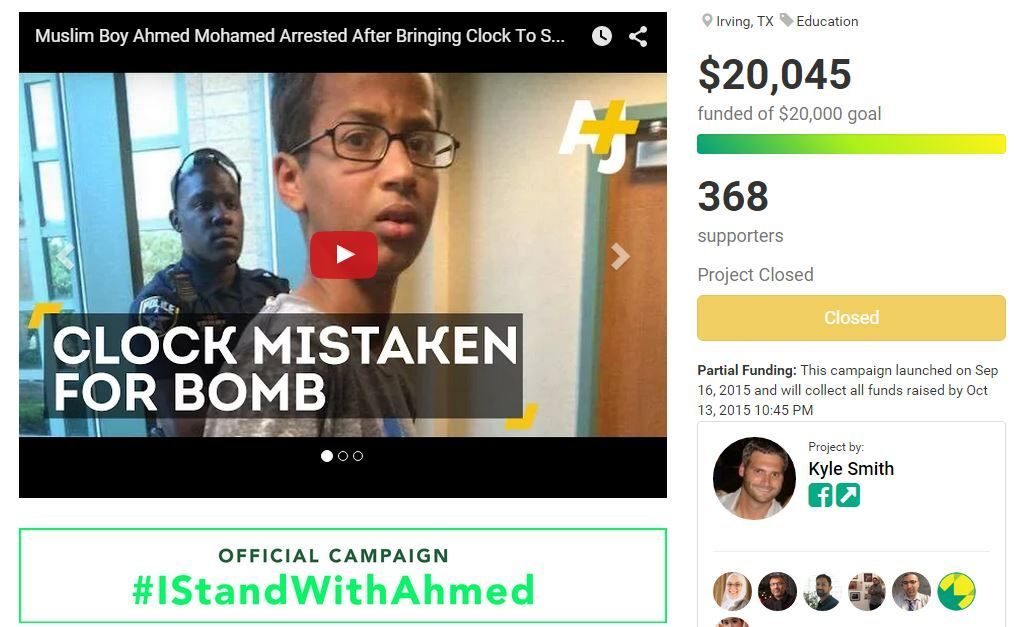 In their article, CNN also hawked a GoFundMe effort to raise $60,000 for the clockmaker. This ongoing campaign seeks to fund a year’s worth of tuition, living expenses, books, and fees for Ahmed to attend MIT, although no announcement exists that the teen will attend the prestigious university. As of press time, the GoFundMe effort raised $8,060.