Numerous significant thinkers from Pulitzer prizewinning journalist Thomas Friedman to the Prince of Wales to  ex-choral-jailbait-nymphet Charlotte Church have been promoting the theory that the current troubles in Syria are the result of a drought caused by ‘climate change’. 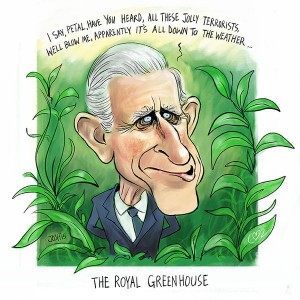 It’s an easy mistake to have made.  Often when people are short of food and water their natural instinct is to strap on a suicide vest, pick up a Kalashnikov and drive to Paris in order to kill a few hundred people as an important gesture designed to raise public awareness of the urgent need to reduce anthropogenic carbon dioxide emissions before someone gets hurt.

But in this case, Friedman, the Prince of Wales, Charlotte Church – and also Graham Linehan, the Irish scriptwriter of the brilliant comedy series Father Ted – are wrong in their assumption.

We know this because of a stubborn fact called meteorological evidence.

As Roger Andrews demonstrates here in great detail the “drought” that supposedly ravaged Syria between 2006 and 2011 and drove thousands of ordinary Syrians into the arms of ISIS and Al Qaeda never actually happened.

Take Aleppo – where, according to the “drought” theory, conditions got so bad that thousands were driven off the land:

Last January, it was reported that crop failures ….. just in the farming villages around the city of Aleppo, had led 200,000 rural villagers to leave for the cities.

Maybe. But here’s the problem with that theory: there was no drought in Aleppo.

Average annual rainfall during the 2006-2011 period was only 9% lower than average annual rainfall over the preceding 55 years. The driest year during the period (2011) was only the seventh driest on record and 2006-2011 was only the 13th driest six-year period on record. Clearly the crop failures in the farming villages around Aleppo – which undoubtedly occurred – weren’t caused by a drought of Biblical proportions. In fact there doesn’t seem to have been a drought at Aleppo at all.

Yes, in some parts of Syria it’s true there were much greater falls in average annual rainfall. But not in any of the main crop-growing areas. 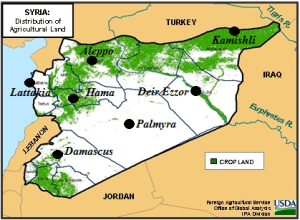 So, to repeat, the 2006 to 2011 drought which experts like the Prince of Wales are citing in support of their “climate change” causes terrorism thesis did not exist.

That doesn’t mean, by the way, that there were no food shortages in Syria during that period. There were. But, as Roger Andrews goes on to explain, this was largely the result of geopolitical factors and poor farming practice.

There have been two historic contributors. First was Syria’s skyrocketing population, which more than quadrupled from 4.7 million to 22.1 million between 1961 and 2012. Second was Syria’s government, which in an attempt to keep up with population growth encouraged rapid development of irrigated croplands beginning in the 1980s (according to FAO data Syria’s irrigated cropland increased by 70%, from 693,000 to 1,180,000 hectares, between 1990 and 1995 alone, which explains the large increase in wheat production over this period seen in Figure 7). Climate and Security summarizes the problems thus:

Based on short-term assessments during years of relative plenty, the government has heavily subsidized water-intensive wheat and cotton farming, and encouraged inefficient irrigation techniques. In the face of both climate and human-induced water shortages, farmers have sought to increase supply by turning to the country’s groundwater resources, with Syria’s National Agricultural Policy Center reporting an increase in wells tapping aquifers from “just over 135,000 in 1999 to more than 213,000 in 2007.” This pumping “has caused groundwater levels to plummet in many parts of the country, and raised significant concerns about the water quality in remaining aquifer stocks.” On top of this, the over-grazing of land and a rapidly growing population have compounded the land desertification process. As previously fertile lands turn to dust, farmers and herders have had no choice but to move elsewhere, starve, or demand change.

But while these factors undoubtedly contributed the event that probably contributed most to the 2008 crop failures was Bashar Assad’s 2005 “liberalization” of the Syrian economy, which caused a near-tripling of the price of diesel between 2007 and 2008 and made it “nearly impossible for many cultivators to keep their irrigation pumps running, much less to transport produce to the cities” (sources here and here). I haven’t checked any further, but if this is why Syria’s crops failed then Obama, Kerry,  Pope Francis et al. are calling for global action on climate change because Assad hiked diesel prices in Syria eight years ago.

But obviously all this weight of evidence still won’t be enough to persuade the righteous. When you feel that “climate change” is the answer to everything, who needs facts?