On November 16, Breitbart Contributors Ilya Feoktistov and Sam Westrop released a devastating exposé on recently re-elected Cambridge City Council Member Nadeem Mazen, who also proudly serves on the board of the Massachusetts chapter of the Council on American-Islamic Relations (CAIR), an organization linked to Hamas and financed in part by Saudis.

The piece, titled “Hamas On The Charles: Cambridge, MA Re-elects CAIR Leader To City Council,” delved into Mr. Mazen’s ideology, and his distain for secular Muslims.

In addition to his leadership roles at CAIR, the Hamas-tied, Islamist group, with which the the FBI has suspended formal contacts, and also with MassMuslims, Mazen “was elected president of the MIT Muslim Students Association, under the aegis of Suheil Laher, who, it turns out, is a former Al Qaeda fundraiser,” wrote Feoktistov and Westrop. And Mazen himself has argued against the Cambridge Police Department’s “increased militarization,” even in the aftermath of the Boston Marathon bombings.

Their fact-based piece, which cited twenty-nine sources, provoked an apparent panic within the Cambridge City Council. Last Monday, it unanimously passed an official resolution censuring Breitbart News Network, for its supposed “history of outrageous and sensationalized journalism designed for shock value but which has no proven basis in truth whatsoever.” 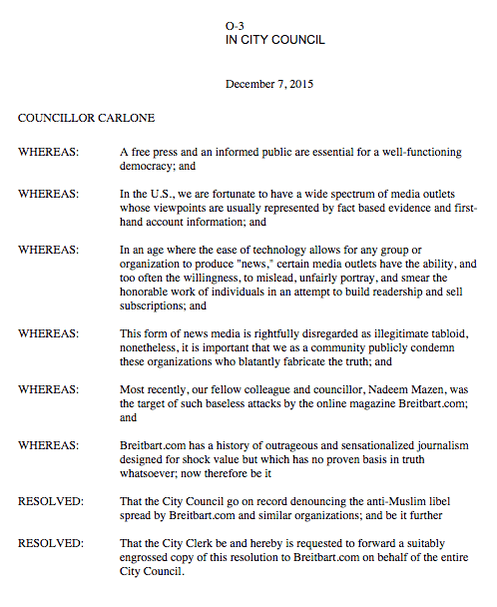 The Cambridge City Council’s politically motivated rush to defend its “fellow colleague and councillor, Nadeem Mazen,” is an affront to the First Amendment and the freedom it provides to journalists who cover public officials and matters of public importance.