The Southern Poverty Law Center, always seeming to hover in the shadows whenever honest citizens and organizations try to stand up for this country, is at it again. In addition to the usual suspects – which includes pretty much anyone who disagrees with the American radical Left – SPLC has been increasingly attacking people and groups who express concern about Islamic terrorism –adding them to SPLC’s infamous “Hate Watch” list.

This now includes the Washington, DC think tank, Center for Security Policy. Widely respected in defense circles, the Center has been warning us for years about the subversive tactics being employed by the Muslim Brotherhood and its proxies to destroy our nation from within. Its veteran analysts from the defense and intelligence community seek to warn the country of the existential threat we now face from Muslim terrorists.

People all over the world have witnessed the terrorists’ handiwork, and America is now undeniably in the cross hairs. Any organization purporting to defend civil rights would not blame, much less attack, Americans for being alarmed, and would be hard pressed to explain its criticism of the Center for Security Policy.

In fact it is difficult to imagine anyone in their right minds not being alarmed. The chart below uses a list compiled by the Heritage Foundation and traces terror plots in the U.S. since 9/11/01. It is easy to see that the trend has been increasing exponentially and in 2015 went off the charts. What will happen in 2016? Already 3 terror plots have been thwarted and the FBI has over 900 pending ISIS cases in all 50 states. With the attacks in France and America, and the violent Middle East migrant invasion of Europe, how could people not be concerned? 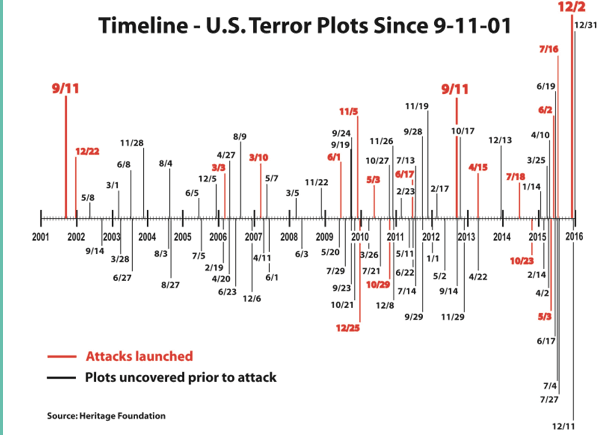 The only true haters are the Islamists and SPLC. Americans do not need to justify their concerns over Islamic terror and its political corollary, the body of Islamic law known as shariah. Indeed, shariah is anathema to every freedom we hold dear and threatens to rob us of it before our very eyes.

If there were no reason to be concerned about Islam, it should be a simple matter for American Muslim leaders to reassure America. But instead, they denounce Americans as Islamophobic and the SPLC turns it into a nationwide vilification campaign. In gambling they call this a “tell.” When your political opponent resorts to name calling, it is because he cannot articulate a credible argument against you. So instead of arguing, he intimidates and attacks.

When an organization as prominent and powerful as the SPLC turns its guns on you, it can cost you your job, your livelihood – even your standing in the community. Not because you have done anything wrong. Not because what they say about you is true, but because a focused vilification campaign forces others to avoid you out of fear. You become what they call “radioactive.”

It is a form of psychological attack familiar to the Left. Vladimir Lenin wrote:

We must be ready to employ trickery, deceit, law-breaking, withholding and concealing truth… We can and must write in a language which sows among the masses hate, revulsion, and scorn toward those who disagree with us.

Herbert Marcuse, a German Communist scholar of the Marxist Frankfurt School, formalized this notion in a 1965 essay titled Repressive Tolerance; Marcuse argued that the First Amendment was insufficient in addressing the Left’s need to be heard. In racist, imperialist, oppressive America, their message would always be ignored. It wasn’t fair, he argued. Marcuse’s answer was to shut down the opposition:

While most of us have never heard of Marcuse or his theory, his idea was enthusiastically embraced by the Left. Marcuse himself was an associate of Julian Bond, an SPLC board member from its founding.  Marcuse and Bond were co-founders of the leftwing newspaper In These Times. They both served on the National Conference for New Politics and were involved in other radical activism.

Marcuse’s “Liberating tolerance” found its most practical application in Saul Alinsky’s Rules for Radicals, which systematized the tactics of hate, ridicule and vilification to shut down opposing voices. While most leftists have memorized this tactic and we witness it every day in media and politics, I think it is the SPLC’s raison d’être.

Note that they never attempt to justify their position, because they never could. Their sole purpose is to destroy political opposition. That is why debating the Left is impossible. They are not debating. They are calculating ways to destroy you.

And if you think I exaggerate, perhaps I should quote the SPLC itself, whose spokesman Mark Potok has said, “Sometimes the press will describe us as monitoring hate crimes and so on. I want to say plainly that our aim in life is to destroy these groups, to completely destroy them…”

Though trained as a lawyer, SPLC’s founder, Morris Dees, is best known for his fundraising ability. Raising over $24 million for the George McGovern presidential campaign in 1972, his payment was the donor list, the gold mine that provided much of SPLC’s later funding. He also worked on the Jimmy Carter campaign in 1976, adding to SPLC’s donor list. In fact, besides issuing slanderous attacks on political opponents, fundraising seems to be SPLC’s primary objective. So since one of the SPLC’s tools is hate, perhaps we should examine how other liberals view them.

Morris and I, from the first day of our partnership, shared the overriding purpose of making a pile of money. We were not particular about how we did it; we just wanted to be independently rich. During the eight years we worked together, we never wavered in that resolve.

Ever since 1971, U.S. Postal Service mailbags have bulged with his fundraising letters, scaring dollars out of the pockets of trembling liberals aghast at his lurid depictions of hate-sodden America, in dire need of legal confrontation by the SPLC.

Today, the SPLC spends most of its time – and money – on a relentless fund-raising campaign, peddling memberships in the church of tolerance with all the zeal of a circuit rider passing the collection plate.

Noting an Arlington, Virginia reader’s question about contributing to the SPLC in the federal government’s Combined Federal Campaign, an editorial in The Fairfax Journal concluded:

… give your hard-earned dollars to a real charity, not a bunch of slick, parasitic hucksters who live high on the hog by raising money on behalf of needy people who never see a dime of it.

Stephen Bright, President of the Southern Center for Human Rights:

The positive contributions Dees has made to justice – most undertaken based upon calculations as to their publicity and fundraising potential – are far overshadowed by what Harper’s described as his “flagrantly misleading” solicitations for money. He has raised millions upon millions of dollars with various schemes, never mentioning that he does not need the money because he has $175 million and two “poverty palace” buildings in Montgomery. He has taken advantage of naive, well-meaning people – some of moderate or low incomes – who believe his pitches and give to his $175-million operation. He has spent most of what they have sent him to raise still more millions, pay high salaries, and promote himself.

Making money does seem to remain SPLC’s primary preoccupation. SPLC raked in $54.4 million in FY 2014, according to its most recent IRS filing, with net assets topping out at an incredible $314.7 million. Some of SPLC’s assets are stashed away in offshore accounts in the Cayman Islands and Bangladesh of all places. Nobody knows how much or why they do that but it is beyond the reach of law enforcement.

Despite its vaunted donor list, SPLC has received millions from literally hundreds of foundations over the years.  The following table lists SPLC’s top ten donors between 2000 and 2014.  The Picower Foundation provided the most. Founder Jeffrey Picower made $5 billion from the Bernie Madoff scam. Friends with Madoff for 30 years, he made more than Madoff himself. The Picower estate settled a suit for $7.2 billion to compensate victims. Don’t look for SPLC to return any of their millions however. 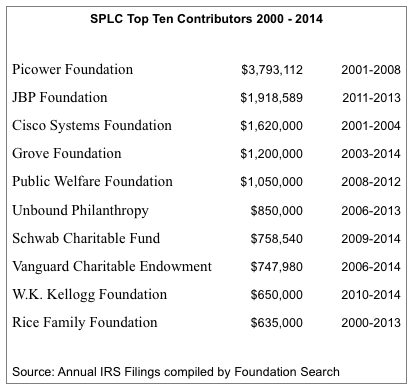 The Southern Poverty Law Center has worked tirelessly to eradicate the last vestiges of poverty, Southern or otherwise, in the lifestyle of founder Morris Dees…by smearing people like Dick Lamm, three-times Democratic governor of Colorado. Some of the moolah raised from the affluent saps Dees has terrified has gone into building this expensive but godawful-looking headquarters building in Montgomery, Alabama…Yes, I know it looks like a high-rise trailer, but, trust me, it cost a lot of money to build something that ugly.

…a “building” designed to look like a small-scaled Death Star, all black reflective glass, canted concrete and steel walls…

In a singular display of pettiness, SPLC’s Levin, CEO at the time, felt the need to respond to Kunstler’s criticism. Kunstler gave it right back:

You say, “…I was CEO when the building was designed and constructed and lived with that process for almost three years.”

Well, you got hosed. You bought the Emperor’s New Clothes… you put up a building that is a horror, and I’m glad that I said so in public. Now I am only sorry that I did not know you were responsible for the building, or that you were in the audience, because I would have singled you out for opprobrium…

The issue is what you did on the site you chose. (And by the way, in case you wonder, I am a registered Democrat and a New York Jew, not a conservative.) You put up a building that looks like the Fuhrer Bunker. It dishonors the site and it even dishonors your mission of social justice. The design of the building makes social justice appear despotic.

And despotic seems to aptly describe SPLC’s entire approach. SPLC made its bones suing the Ku Klux Klan into penury. Nobody can fault them for that. But then, wrapped in the mantle of “social justice”, SPLC grabbed a place of honor among the civil rights legends, all the while turning its notoriety into a cause célèbre for a massive, non-stop fundraising drive. It must ever grow its list of what it defines as “extremist” to shake down terrified donors for more funds. If it ever had noble motives, SPLC has certainly lost its way. Next time you read something, anything from the SPLC, understand what they are really about: fomenting hate and making money. Consider the source.