The Drudge Report has declared Donald Trump “the nominee” in 2016 after his landslide victory in Nevada’s caucuses on Tuesday night. 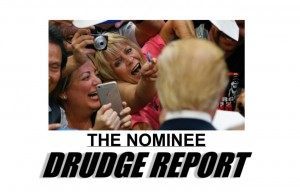 The Drudge Report, which is run by media mogul Matt Drudge, is clearly trolling the entire mainstream media—which continually aims to prop up the so-far-failed candidacy of Sen. Marco Rubio (R-FL). Sen. Ted Cruz (R-TX) is also hanging in there for now, and the two are battling each other, but Trump—ever since Cruz’s comeback victory in Iowa’s caucuses—has been plainly dominating in every contest since.

Trump won New Hampshire’s primaries and then South Carolina’s primaries, both in landslide elections. Trump is the runaway leader in most polling in soon-to-vote states, leading Rubio in Florida, Ohio Gov. John Kasich in his home state, and in virtually every Super Tuesday state.