Democrats who have received thousands of dollars in campaign contributions from Planned Parenthood failed to derail a hearing called by a bipartisan House panel that is investigating the abortion business’ alleged involvement in the for-profit sale of aborted baby body parts.

“From the outset, this investigation has not been an objective or fact-based search for the truth but a political weapon to attack women’s health care and life-saving research and harass and intimidate those who provide these services,” said Rep. Jan Schakowsky, the top-ranking Democrat on the bipartisan House Select Investigative Panel on Infant Lives.

Republicans have again invited witnesses who believe that abortion should be illegal – that women should not be permitted or trusted to decide whether to carry a pregnancy to term. Some continue to declare that Planned Parenthood is selling fetal tissue for profit despite the fact that three House Committees, twelve states, and a Texas grand jury have already cleared the organization of wrongdoing. These witnesses – like our Republican colleagues – endorse and rely upon the video allegations of anti-abortion extremist David Daleiden and his associates to support their inflammatory claims.

Anyone who has been following the facts knows the truth: Mr. Daleiden’s videos are not accurate or reliable, and they do not show the unlawful sale of fetal tissue…

There is no reason to believe that Daleiden – a proven liar when it comes to Planned Parenthood – would be any more truthful about anyone else involved in reproductive health care or fetal tissue research. Yet instead of correcting the record on the Daleiden videos, the Chair continues to invoke them.

Nevertheless, the House panel’s documents examined at the hearing point to the abortion business’s profiting from the sale of body parts of babies aborted in its clinics. A white paper produced by the House panel and accompanying exhibits highlight three important discoveries.

First, fetal tissue procurement companies – such as StemExpress, which was featured in the investigative videos produced by the Center for Medical Progress (CMP) – appear to do all of the work in the fetal tissue transfer, with no cost to abortion clinics such as Planned Parenthood, allegedly allowing the abortion companies to receive millions of dollars in pure profit.

Second, by 2015, StemExpress was working with nearly 100 abortion clinics. Approximately 1 in every 5 abortion facilities nationwide was involved in the sale of the body parts of aborted babies to StemExpress. Just prior to the release of the CMP investigative videos, the tissue procurement business was about to have access to over 50 percent of the abortion market.

Third, CMP’s video exposé was just the tip of the iceberg regarding the relationship between Planned Parenthood and StemExpress.

“This investigation has never been – and has no promise of becoming – fair or fact-based,” continued Schakowsky. “Our Republican colleagues’ disdain for the facts – and for women and their doctors – is putting researchers, doctors, and women at risk. It is time for Republican leadership to bring this investigation to an end.”

Rep. Marsha Blackburn, the Republican chairwoman of the panel, however, said Republicans’ presentation of “business documents, invoices, marketing brochures, and management documents” at the hearing “reveal that one for profit Procurement Business and several abortion clinics may have violated” federal statute prohibiting profits from the sale of fetal tissue.

During her review of the exhibits, Blackburn turned to Exhibit B2 and said:

This is the procurement company Brochure that it handed out at national conferences where Abortion Clinic managers were in attendance. Notice it says “financially profitable . . . fiscally rewards . . . financial benefit to your clinic.” 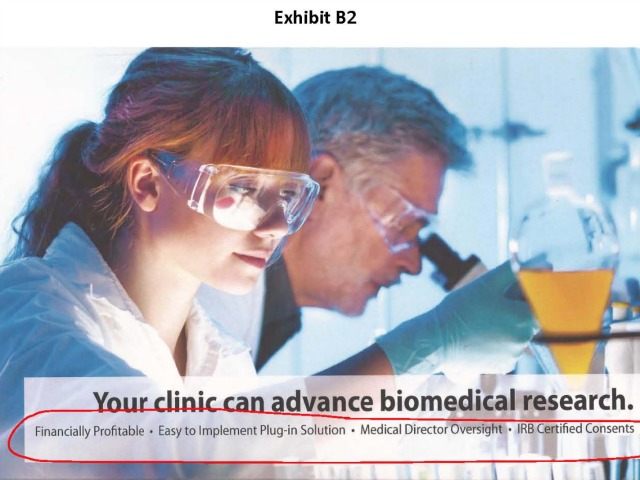 Look at Exhibit B3 which is a website screen grab of the Procurement Business.  Once again “Financially Profitable . . . while also providing a financial benefit to your own clinic.”

Now turn the page and look at Exhibits B4 and B5.

The Procurement Business started in 2010 with 3 clinics. In 2 years it was up to 30 and in two more years it had nearly 100. Further, they were negotiating a contract to have over 250 clinics by this year, but the co-marketing negotiations with a national abortion trade organization fell apart about the time the videos came out last year.

“Now you do not have to be a lawyer to see what’s going on here,” Blackburn said. “You put up a website that offers any baby body part imaginable – and why on earth do they need a baby scalp? Then you pick the gestation period and then check out.”

“This does not sound to me like tissue donation for research – this sounds like someone who wants to make money, a lot of money selling baby body parts,” Blackburn asserted.