The wage-cutting, salary-slashing promise was delivered, half buried, in a “Town Hall” meeting conducted with Paul Ryan by CNN’s Jake Tapper.

By offering foreign workers to fill so-called “gaps” in the labor market, Ryan would give employers a huge gift — the ability to hire foreign workers whenever American employees or young job-seekers ask for higher wages, and without ever having to train any Americans to take higher-tech, higher-wage jobs. That’s a huge giveaway to employers and to Wall Street, where stock prices rise when wages drop.

Ryan’s wage-cutting promise was ignored by CNN and other media outlets.

The scale of the Ryan giveaway can be measured against the final years of President Bill Clinton’s term, when employers had to offer higher wages to prevent their workers from being lured away by other employers. Wages nudged up briefly during the real-estate bubble, but have largely stalled ever since. 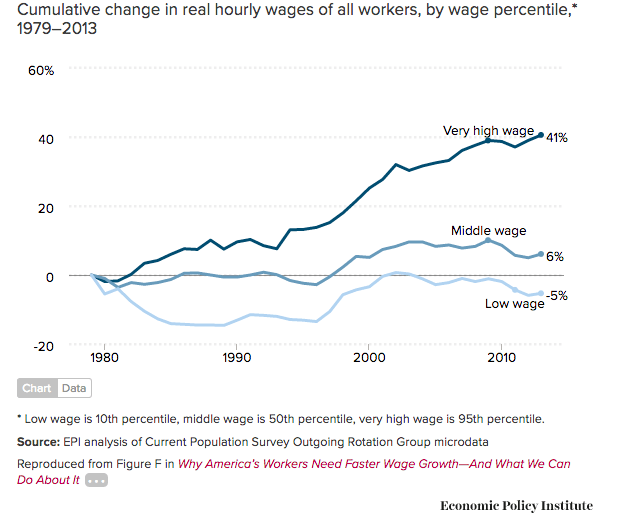 In his town hall meeting, Ryan said he opposed Trump’s plans to repatriate the roughly 11 million illegal migrants, and then said he would favor some form of staged amnesty for the illegals. “Those [illegal immigrant] people who need to get right with the law … so that they can get a work permit, a work permit to work,” Paul Ryan said.

“That to me is more of an approach that works, it makes sense, and it will — it won’t require a roundup or mass deportation, which I just don’t think is a good idea,” said Ryan, who is strongly backed by U.S. business groups.

The population of at least 11 million illegal migrants includes at least 8 million workers who compete for jobs with Americans and who drive down wages.

Ryan has consistently pushed this “any willing worker” message for years. For example, he told National Journal magazine in 2013 that migrants;

… bring labor to our economy so jobs can get done. The dairy farmers in western Wisconsin are having a hard time finding anyone to help them produce their products, which are mostly cheese. If they can’t find workers, then they can’t produce … The flip side of the argument is: Just raise wages enough to attract people. But you raise wages too much in certain industries, then you’ll get rid of those industries, and we’ll just have to import.

NJ; Should high- and low-skilled workers be treated the same?

RYAN: They should have different visa categories that should fluctuate with the needs of the economy. That’s something we’re going to negotiate here. Most other countries have a visa system that is wired to feed their economy.

Unsurprisingly, Wall Street studies have shown that large-scale immigration reduces wages, and that actual enforcement of the laws against illegal immigrants forces employers to pay higher wages to Americans.

Last month, a Wall Street study showed that Donald Trump’s labor-reform and immigration plans would force up wages and also reduce the price of housing. In 2013, a report by the Congressional Budget Office showed that large-scale migration shifts wealth away from workers and towards Wall Street.

The wage-cutting process applies to both blue-collar workers and to skilled white-collar workers. For example, many Americans who want their kids to get a good job at one of the nation’s universities don’t know that the universities already have hired roughly 100,000 foreign white-collar guest workers, each of whom rationally accepts lower wages for the opportunity to work in the United States instead of China or India.

Ryan has personally expanded this job outsourcing process. In December 2015, for example, he added language to the annual funding bill that allows companies to bring in an additional 190,000 temporary blue-collar workers each year, at wages set by employers, not by the routine free-market tension between supply and demand, workers and employers.

Unfortunately for Ryan, Americans in the Midwest are the most concerned over the impact of cheap-labor immigration on their wages and jobs.

For example, a recent poll asked respondents, “In general, do you think immigrants in the United States help create jobs, take away jobs, or have no impact on jobs?” Fifty-five percent of Midwestern respondents picked the “take away jobs” answer, while only 16 percent picked “create jobs.” The 39-point gap — almost a consensus — was much wider than the other regions. Also, an unusually large slice of respondents — 30 percent — said migrants have no impact, or declared they did not know the impact, suggesting that some people did not want to reveal their preference for less immigration.

Surprisingly, Jake Tapper did not press Paul Ryan to explain how Americans’ salaries and wages would be impacted by the “any willing worker” visa system. Instead, he allowed Ryan to talk about how the border should be secured.

Ryan said he wants the border secured against drug smugglers and terrorists — but mostly to ensure that Americans will accept the “any willing worker” cheap-labor plan.

Then I believe you need to fix this broken immigration system. So once you get this border secured, you’ve got to fix a broken legal immigration system, which isn’t working. It’s 20th century. We need to bring it to the 21st century.

Others journalists recognize the huge political gulf between Ryan and Trump on wages and labor.

Chuck Todd says Paul Ryan is an "Open-Borders" internationalist, and that's why he clashes with Trump pic.twitter.com/HHOhuvfex3

During the town hall, Ryan said he wanted to ensure that all Americans have jobs — but he didn’t mention wages or salaries, or even any need to increase wages by raising productivity. Instead, for Ryan, immigration is just a way for employers to import foreign workers and to trump the market for labor whenever Americans ask for the higher wages which they’ve fairly earned in the job market — and which they need to help them get married, buy a house and raise more than one child.

“I think we should give visas based on what the economy needs so that we’re making sure that [illegal immigrant] people aren’t taking jobs that Americans can take, that Americans can fill …then after we do that … we’re still going to need [more foreign] people in this country,” he said.