Fiscal analysis by American Action Forum revealed that Hillary Clinton’s tax and spend proposal will drag the economy and generate $2.153 trillion in new federal debt over a 10-year projection.

“Nearly eight years of higher taxes and a skyrocketing national debt should be enough to show that a so-called ‘progressive’ vision for the nation does little more than lead to weak economic growth and fewer opportunities for all Americans,” said Adam Brandon, the CEO of FreedomWorks, the largest network of activists advocating the principles of smaller government, lower taxes, free markets, personal liberty and the rule of law.

“The tax and spending plans that Hillary Clinton has put forward only continue these failed policies, leading to even more deficits and debt,” Brandon continued.

Gordon Gray, the fiscal policy director for American Action Forum, wrote in his summary of his analysis: “Based on these estimates, Secretary Clinton’s proposals would, on net and over a 10-year period, fiscal years 2017 through 2026, increase revenues by $1.3 trillion, increase outlays by $3.5 trillion, for a combined deficit effect of nearly $2.2 trillion over the next decade.”

Gray’s American Action Forum is a Washington-based organizing and logistics hub for conservative activists across the country,

It is a quirk of the American federal tax system that without regard for the tax rates or the tax cut, revenues to the federal government come in at between 18 and 20 percent of GDP–at least since the Second World War. One explanation is compliance-risk, which is the concept that when taxpayers feel taxes are unfairly high, they seek tax avoidance, but when taxpayer feel the tax rate is fair, they send in the full amount they are due. 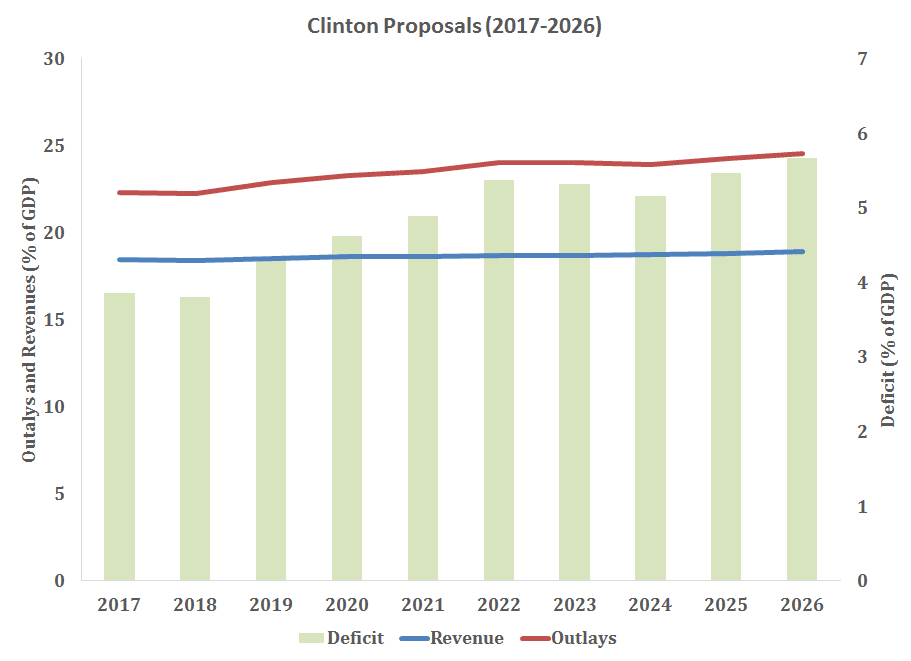 Brandon said, “The dam containing the river of red ink from Washington is crumbling, and it threatens to drown Americans.”

Clinton and her proposals are not the solutions to America’ s problems, he went on to say.

“If America is to prosper in the years ahead, we must reduce tax burdens and simplify the tax code, roll back regulations that are hurting businesses and consumers, and address the drivers of budget deficits.” … “Increasing taxes and continuing to drive up the national debt – as Hillary Clinton wants to do – is simply not an option.”

[This article has been updated to reflect that Gordon Gray is the fiscal policy director for American Action Forum, not Freedom Works, as was originally reported.]