For decades, the Democratic party has pushed policies that have turned America’s inner cites into islands of profound impoverishment — neighborhoods where shattered families are often housed, doctored, educated, and fed by bureaucrats.

There’s a misery in many of America’s inner cities that projects perpetual poverty.

Below are seven truths about how the Democratic party’s policies are destroying America’s inner cities, all while taking the voters who live there for granted.

Middle class Americans and African-Americans in inner cities in this country aren’t benefiting from ObamaCare compared to other groups.

According to an extensive 65-page report by The Urban Institute, obtaining coverage has been much harder for black Americans than it has been for Hispanics and American Indians.

In February, black business owners railed against the Obama administration’s decision to funnel millions in Obamacare subsidies to illegal immigrants.

Hardworking black Americans in America’s inner cities are being crushed under the weight of an illegal alien workforce, ever expanding as a direct result of the policies of President Obama.

“Granting work authorization to millions of illegal immigrants will devastate the black community, which is already struggling in the wake of the recession that began in 2007 and the subsequent years of malaise,” Peter Kirsanow, an official with the U.S. Civil Rights Commission wrote to Obama and the Congressional Black Caucus in 2013.

“Illegal immigration has a disparate impact on African-American men, because these men are disproportionately represented in the low-skilled labor force,” Kirsanow.

A new survey by the Black Alliance for Educational Options (BAEO) shows a majority of black voters in several states strongly support school choice, and many favor the option to send their children to public charter schools.

In August, Gallup released its 46th annual PDK/Gallup Poll of the Public’s Attitudes Toward the Public Schools which showed that six in ten Americans – black, Hispanic, and, white adults – favor charter schools and support a parent’s right to chose their child’s education.

Despite the overwhelming evidence that vouchers have helped raise the quality of stagnant school systems for some the poorest American children trapped in shoddy schools, there’s no shortage of Democrats fighting their funding.

For decades Democrats have stopped at nothing to take away and restrict the Constitutional right of the law abiding citizens living in these unsafe communities to carry a firearm as a means to protect themselves and their families.

Nearly 300 years before racist Democrats enacted Jim Crow Laws that helped disarm blacks in the south, Chief Justice Roger Taney argued in his opinion in Dred Scott v. Sanford that blacks could not be granted citizenship because “[I]t would give them the full liberty … to keep and carry arms wherever they went.”

While Democrats demonize it today, the NRA stood to defend blacks when Democrats robbed, murdered, and lynched them in the 50s and 60s.

Today, it’s Democrats — from Hillary Clinton to Barack Obama — still disarming blacks who are being buried by gang violence in Democratic party monopolies across America.

Myriad studies have shown that higher labor costs reduce employment, especially for younger or less educated workers employed at local fast food restaurants and grocery stores. A study from labor economists William Even of Miami University in Ohio and David Macpherson of Trinity University in Texas proves how young black men are being hurt the most by the very minimum wage hikes being pushed by Democratic party leaders in states across the U.S.

About 18,500 black young adults in the 21 states affected by the federal minimum wage increases passed in 2007 lost their jobs. “Among black males in this group, each 10% increase in the minimum wage has decreased employment by 6.5%,” the study said.

The aforementioned study and the damage it examines was based on a $10.10 minimum wage increase. Democratic Presidential candidate Hillary Clinton says she will raise the minimum wage to $15.00 per hour, should she win in November.

That is because Planned Parenthood abortion facilities intentionally inhabit America’s inner cities and are “located within walking distance of African American or Hispanic/Latino neighborhoods.”

The map below, published by protectingblacklife.org, proves it. 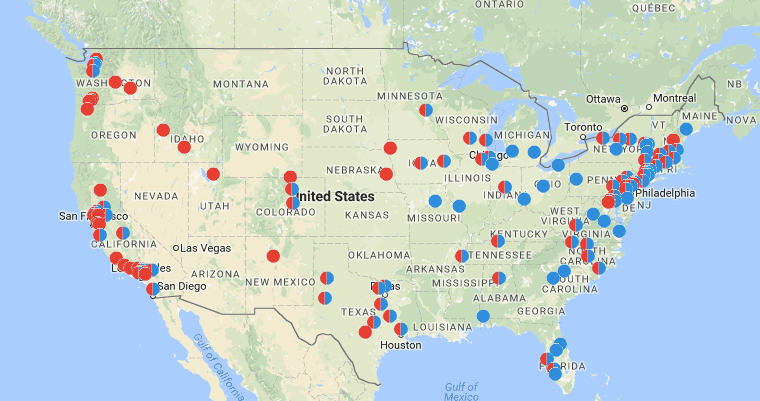 “These communities already suffer from higher unemployment and poverty rates compared to the rest of the country, yet the EPA’s regressive energy tax threatens to push minorities and low-income Americans even further into poverty,” Harry Alford, the president and CEO National Black Chamber of Commerce, said in testimony before Congress last year.

Obama’s Clean Power Plan, Alford argues, will cut greenhouse emissions and in turn raise poverty by 23 percent among blacks and 26 percent among Hispanics and will raise the average American’s energy costs by more than 15 percent by 2035.

“Most importantly, the loss of development and economic expansion would affect many of the blue-collar jobs that power our low-income and minority communities,” Alford argued.