In 2010, then-Secretary of State Hillary Clinton fondly eulogized Sen. Robert Byrd, a former member and recruiter for the Ku Klux Klan. Clinton called Byrd “my friend and mentor” in a video message to commemorate his passing.

As a young man in West Virginia, Byrd was involved in the KKK and reportedly recruited 150 members to the group. While serving in Congress, Byrd set the record for longest filibuster on the floor of the U.S. Senate with a 14-hour filibuster of the 1964 Civil Rights Act.

In a 2005 article titled “A Senator’s Shame,” the Washington Post’s Eric Pianin pilloried Byrd’s attempts to downplay his involvement in the organization as he grew older.

Despite his many achievements, however, the venerated Byrd has never been able to fully erase the stain of his association with one of the most reviled hate groups in the nation’s history.

“It has emerged throughout my life to haunt and embarrass me and has taught me in a very graphic way what one major mistake can do to one’s life, career, and reputation,” Byrd wrote in a new memoir — “Robert C. Byrd: Child of the Appalachian Coalfields” — that will be published tomorrow by West Virginia University Press.

The 770-page book is the latest in a long series of attempts by the 87-year-old Democratic patriarch to try to explain an event early in his life that threatens to define him nearly as much as his achievements in the Senate. In it, Byrd says he viewed the Klan as a useful platform from which to launch his political career. He described it essentially as a fraternal group of elites — doctors, lawyers, clergy, judges and other “upstanding people” who at no time engaged in or preached violence against blacks, Jews or Catholics, who historically were targets of the Klan.

His latest account is consistent with others he has offered over the years that tend to minimize his direct involvement with the Klan and explain it as a youthful indiscretion. “My only explanation for the entire episode is that I was sorely afflicted with tunnel vision — a jejune and immature outlook — seeing only what I wanted to see because I thought the Klan could provide an outlet for my talents and ambitions,” Byrd wrote.

While Byrd provides the most detailed description of his early involvement with the Klan, conceding that he reflected “the fears and prejudices I had heard throughout my boyhood,” the account is not complete. He does not acknowledge the full length of time he spent as a Klan organizer and advocate. Nor does he make any mention of a particularly incendiary letter he wrote in 1945 complaining about efforts to integrate the military.

That letter stated, “I shall never fight in the armed forces with a negro by my side… Rather I should die a thousand times, and see Old Glory trampled in the dirt never to rise again, than to see this beloved land of ours become degraded by race mongrels, a throwback to the blackest specimen from the wilds.”

Long after Byrd claimed to disavow the KKK, he caused controversy and had to apologize for using the phrase “white niggers” in an interview. “There are white niggers,” he said. “I’ve seen a lot of white niggers in my time, if you want to use that word. We just need to work together to make our country a better country, and I’d just as soon quit talking about it so much.”

Clinton’s embrace of Byrd during her time as a U.S. Senator — both literally and figuratively — has been a prominent meme among Donald Trump’s supporters at the Reddit community r/The_Donald. Members have creatively found ways to present a picture that shows Byrd’s Senate portrait photoshopped on an image of a man in Klan regalia — placed side by side with a 2004 AP photo of Byrd drawing in Clinton for a kiss. 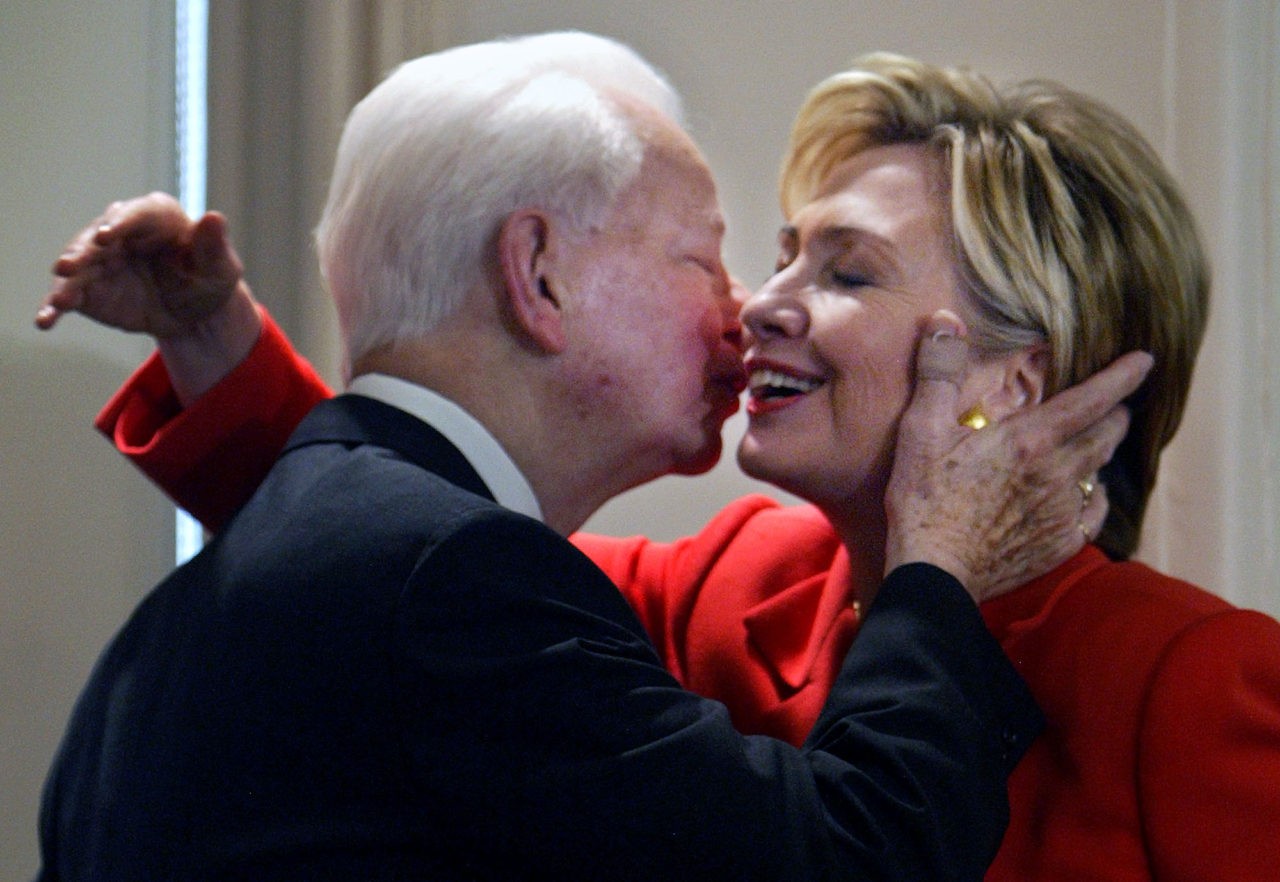 In this July 26, 2004 file photo, Sen. Hillary Clinton, D-NY, is embraced by Sen. Robert Byrd, D-W.Va., at a bookstore in New York where they were launching his book “Losing America: Confronting a Reckless and Arrogant Presidency.” (AP Photo/Bebeto Matthews)