Donald Trump closed a 12-point polling gap with Hillary Clinton in five days, leaving them half a percent apart during the next two-day period, according to new polling data from Reuters. 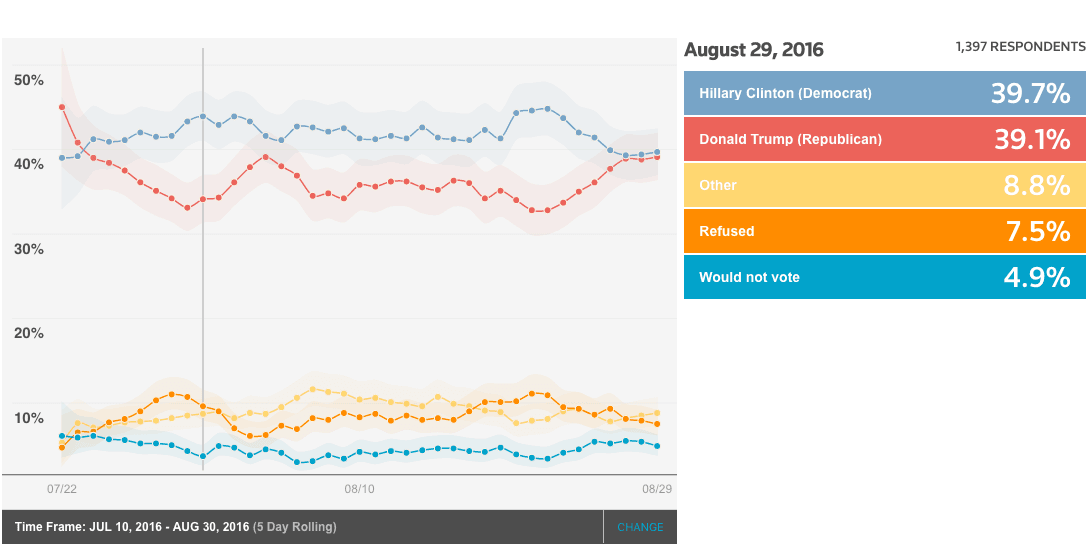 Twenty percent of the respondents declined to pick either of the two leaders in the poll of 1,397 likely voters, which was concluded Aug .29.

The poll reflects a general trend, in which Trump has managed to close much of the gap that Clinton opened in early August.

In July, Reuters sharply changed how it presented polling data, political strategist Pat Caddell told Breitbart Radio. “It is, beyond doubt, the most outrageous thing,” he declared.

The July 25 Reuters poll now shows a result that reflects a 5.3 percentage point flip from the previously published results, he said.

“What you get is an 8.8 percentage point margin change, almost nine points swinging from one candidate, based on some phony, some bizarre allocation theory that you claim you know where these people are or you are just leaving them out,” he said. “I actually believe they are allocating them because they are claiming they are really Clinton voters and they are using something to move them to Clinton.”

“This comes as close as I have ever seen to cooking the results,” said the legendary pollster and political consultant. “I suppose you can get away with it in polling because there are no laws. But, if this was accounting, they would put them in jail.”