First in a Series…

Please, walk with me, and let’s take a tour of the Deep State.

Virgil is used to being a guide.  After all, in his immortal way, he was the docent for Dante as he traveled through Hell and Purgatory, 700 years ago, in The Divine Comedy.

Indeed, Virgil is amused to see that “Deep State” is popping up more and more—although, of course, when the Main Stream Media use the words, its goal is to deny its existence.  That is, the MSM wants you to think that the Deep State is just a paranoid right-wing fantasy, something flitting through the fevered imagination of Donald Trump and his supporters.

For example, on March 4, New York Times columnist Maureen Dowd mockingly referred to Trump’s “increasingly paranoid” attitude “about what he sees as the Vast Deep-State Conspiracy.”  And in another article that same day, the Times again dismissed the phrase.  So that’s the MSM meme: Nothing to see here, move along.

Yet as Rep. Devin Nunes (R-Calif.), the Chairman of the House Intelligence Committee, told The Washington Post on March 5:

It’s not paranoia at all when it’s actually happening.  It’s leak after leak after leak from the bureaucrats . . . and former Obama administration officials—and it’s very real.

Okay, so let’s have a look for ourselves.  Let’s visit the Deep State.  Admittedly, we won’t see its subterranean activities, but we’ll at least see its lair from the surface—and Virgil can add a few details.

We can start with the heart of the US government’s bureaucracy, the Federal Triangle.  That’s the hulking federal office complex, some 70 acres, stretching block after block along Pennsylvania Avenue, dominating the landscape between the White House and Congress.

Mostly built in the 20s and 30s, the architecture of the Triangle is in the neoclassical style; that is, the buildings are the light gray of marble and limestone, adorned with columns, inscriptions, and friezes—and, on top, red-tiled roofs.  It’s enough to make an old Roman nostalgic.

Pedestrians are welcome to file respectfully by these exteriors, wending their way through the many masterful pavilions and courtyards—and there’s even a fountain or two.  In fact, the zone has been formally designated as the Federal Triangle Heritage Area.  (And oh yes, two buildings within the Triangle were built earlier, and not in the Greco-Roman style; each has an interesting story. Virgil will get to them later.) 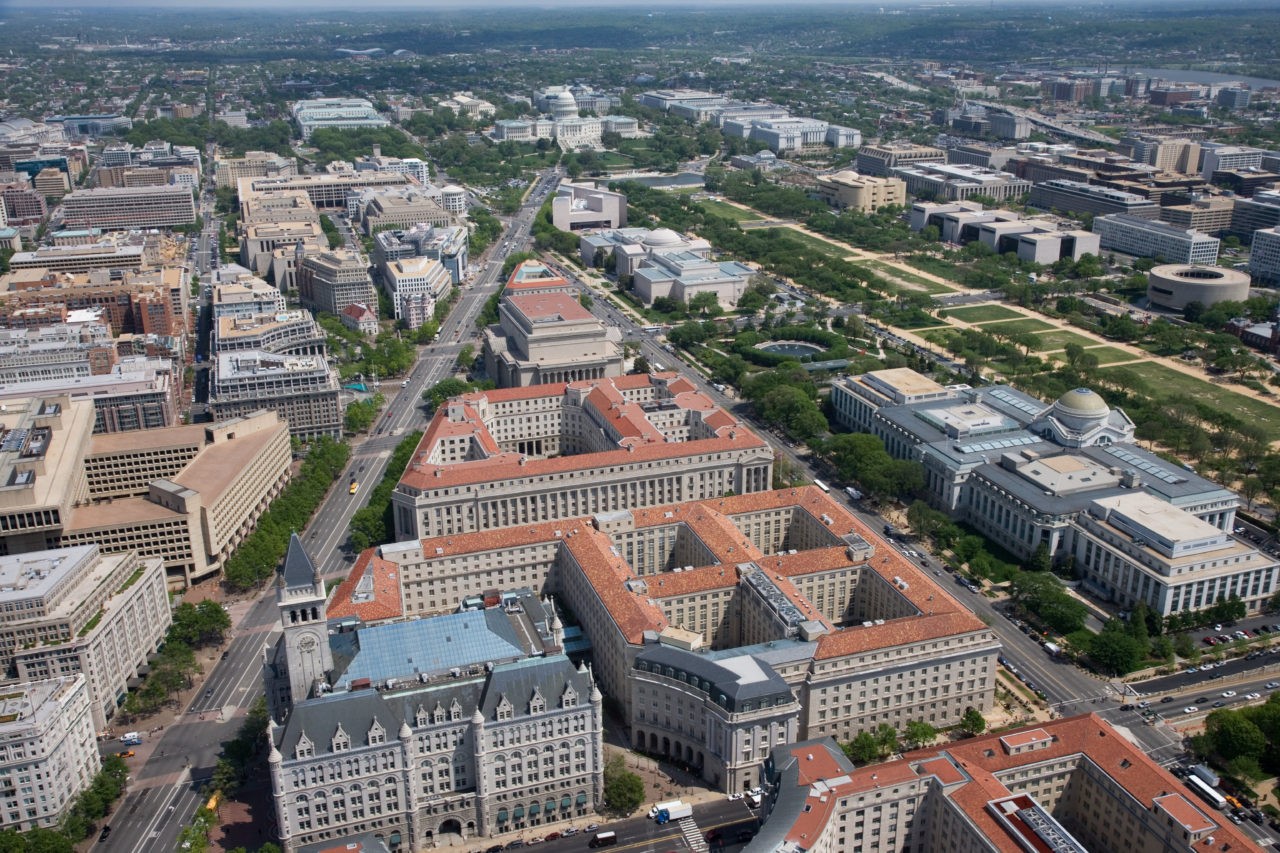 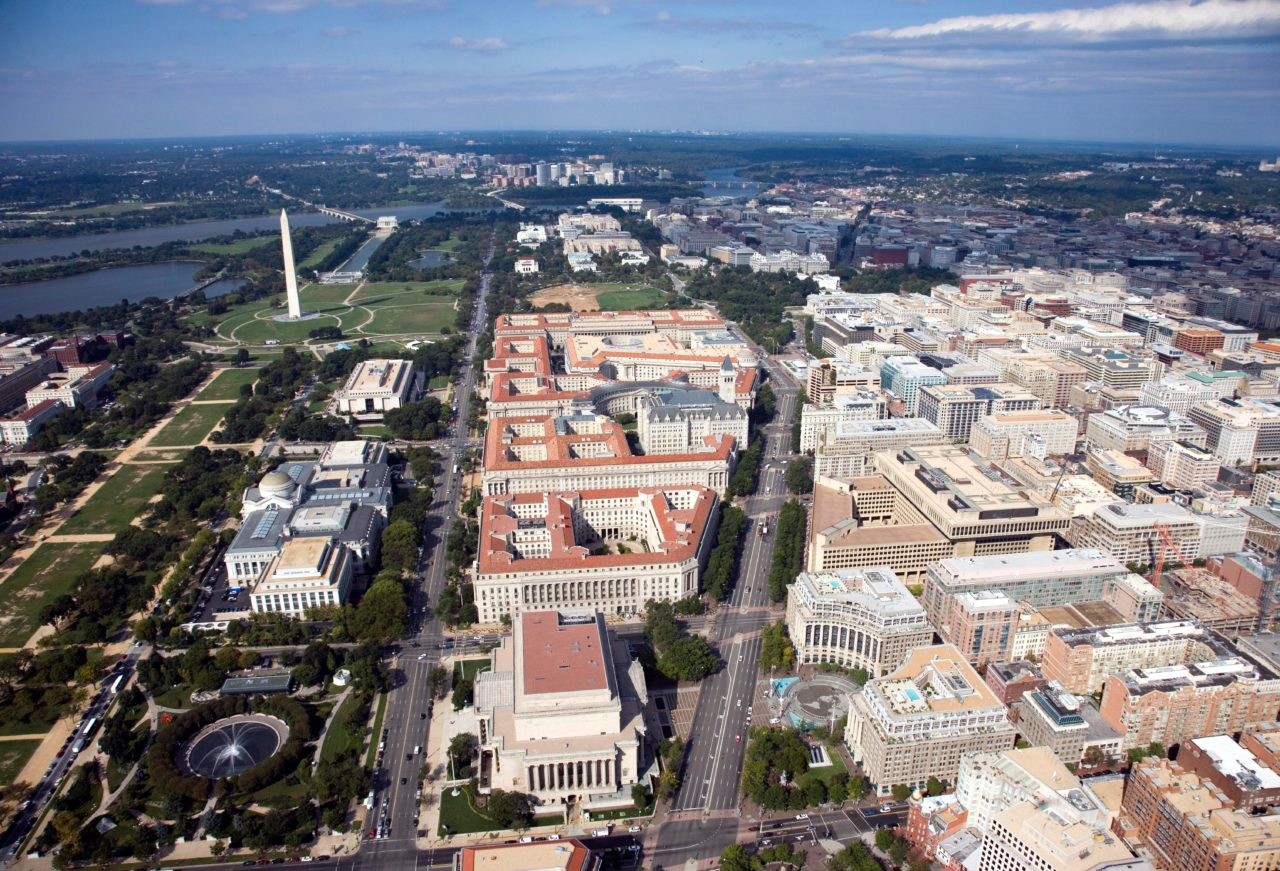 Yes, the Federal Triangle was consciously built to inspire, or at least to impress. Another name for the area is the Monumental Core.  In addition to the grandeur of ancient Rome, a second inspiration was another capital, Paris.  Over there, the Versailles-like offices of les grandes bureaucraties were built to overawe the peasants.

Of course, our Federal Triangle is not to be confused with the “iron triangle”; that’s a different concept—although the two kinds of triangles overlap.

The idea behind iron triangles is that much of the power in Washington is found in the three-way interaction between Congress, the bureaucracy, and interest groups.  For instance, the Congressional committees on agriculture are connected to the Department of Agriculture, as well as to farm lobbyists, and together, all three form a strong unit—an iron triangle.  These triangles are everywhere in DC, and there’s nothing illegal about such relationships; indeed, some sort of regularized operating procedure among players is inevitable—and it has to be called something.  But admittedly, the cumulation of all these iron triangles can cost taxpayers a lot of money.

Of course, the geometry of power relationships in DC is vastly more complex than just a mere triangle; the Deep State, for instance, is a monster polyhedron of interconnections. 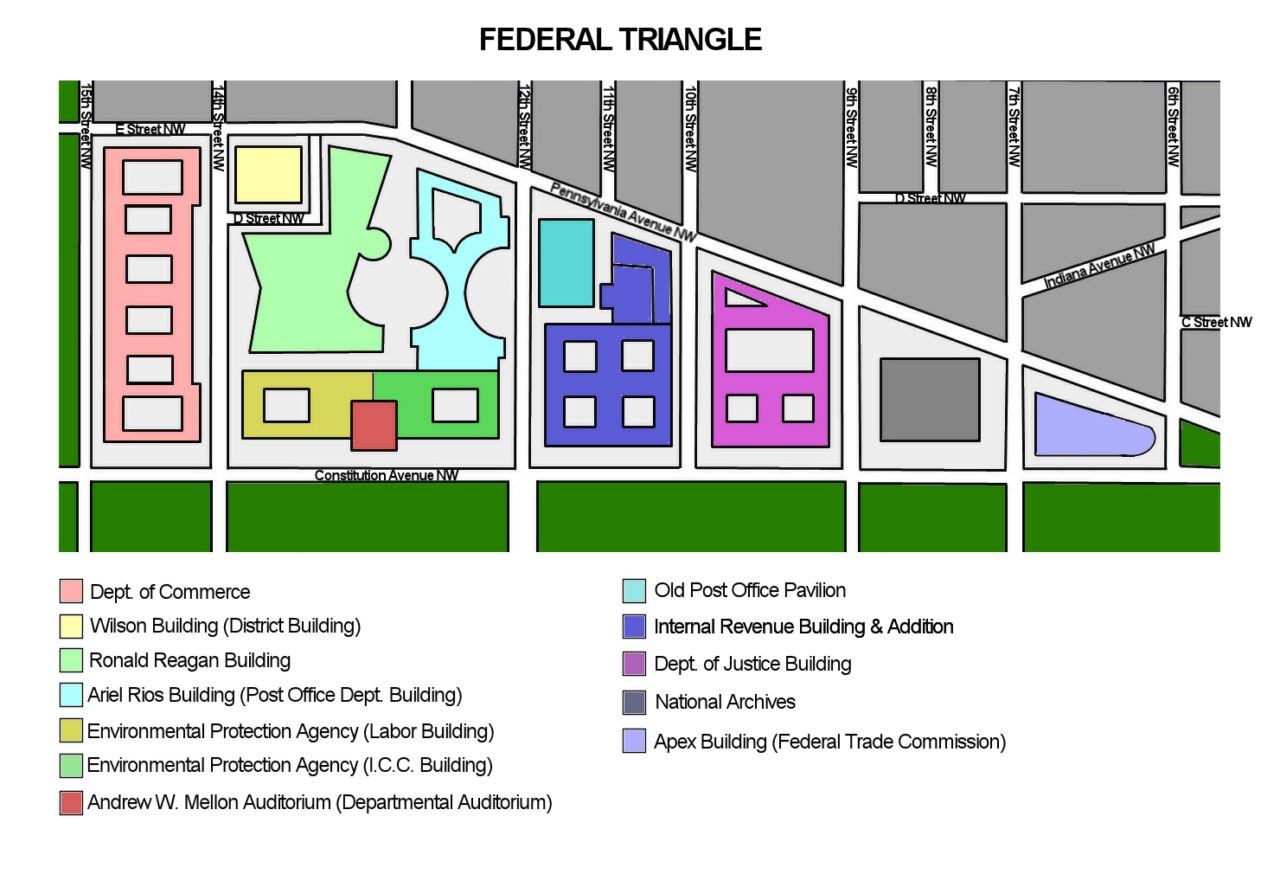 Okay, so let’s start walking. We can start at the west end of the Triangle, on 15th Street, Northwest, at the headquarters of the US Department of Commerce.

Formally, the department’s HQ is known as the Herbert C. Hoover Building.  Hoover was Secretary of Commerce from 1921 to 1928; during those years, he achieved national renown, and that fame propelled him to the presidency.  And if Hoover’s time at the White House was a failure—the Depression, after all, happened on his watch—well, his time at 15th Street was happier, and that’s what Commerce chooses to remember—even if few employees ever bother with that appellation.

Yet by any name, working at Main Commerce has its attractions.  After all, the pay is good, and also, it’s got a great location—right in the heart of Northwest, the fancy quadrant of the capital.

“DOC,” as it’s commonly abbreviated, is the smallest of the cabinet departments, with a nationwide budget of “only” $10 billion.  In fact, Commerce has been a fiscal runt in recent decades—a sad fate for a bureaucracy.

More than a century ago, hopes for DOC were higher.  It was originally created by President Theodore Roosevelt in 1903 as the Department of Commerce and Labor; TR’s intention was that the department would oversee the economic regulation of business, as well as the protection of workers’ rights.  Yet that business-labor arrangement proved unwieldy, and so a Department of Labor was established in 1913.  And a year later, in 1914, much of DOC’s business-regulation portfolio was given over to a new independent agency, the Federal Trade Commission. The FTC, we might note, has its own big building at the other end of the Triangle, on 6th Street—with a spectacular view of the Capitol.  And Commerce lost yet another regulatory function in 1934, when its radio-regulating powers were transferred to the new Federal Communications Commission.

So we can see: The history of any federal entity is the story of bureaucratic turf—who has it, who gains it, who has lost it.  So this is what Deep Statists do in their formal day jobs: They struggle for their share of the federal pie.  With apologies to the song “As Times Goes By,” made so memorable in the Humphrey Bogart film Casablanca, “It’s the same old story/ A fight for bureaucratic glory.”

Yet in addition, in times such as this, when Republicans are riding high, many federal employees feel the need to do more—much more.  That is, they must now fight Trump, as well as, of course, the GOP agenda.  That’s when veteran bureaucratic infighters turn into Deep State shadow warriors.

Indeed, after so many years as an also-ran, DOC is once again in the action.  And that’s because in recent years, Commerce has repositioned itself as a “green agency.”  That is, it has expanded some of its units, including the National Oceanic and Atmospheric Administration (NOAA), by focusing them on the trendy issue of “climate change.”  This greening of DOC was a successful strategy during the Obama years, and NOAA played it to the hilt; as recently as January, in the waning days of the Obama administration, NOAA was banging the green drum: One headline read, “2016 was 2nd warmest year on record for US: 15 weather and climate disasters caused 138 deaths, $46B in damages.”

Of course, “climate change” as a bureaucratic mission became more problematic after the inauguration of the 45th president; Trump has a long record as a “climate change” skeptic.  Indeed, just on March 3, Politico reported that the Office of Management and Budget, a unit of the Executive Office of the President, has targeted NOAA’s budget for a 17 percent cut.

So now DOC Deep Statists are rebels with a cause; they are mobilizing against the dreaded Trump.  Immediately, Deep State allies loaded up their headlines: “NOAA Cuts Could Stymie Research, Put Lives at Risk,” blared the green group Climate Central.

Meanwhile, from within the Deep State itself, we saw other acts of covert resistance.  One favored resistance tactic, at DOC and every other agency, is to listen to orders against leaking—and then leak the orders.

And other leaks, too, are pouring forth: One such was about a conversation that the new Commerce Secretary, Wilbur Ross, had with Trump about food safety.  And here’s another leak: CBS News reported on February 27 that Trump’s choice to be deputy secretary of Commerce, Todd Ricketts, has been running into difficulty in the process of disclosing and/or divesting assets, and so he may have to withdraw from consideration.

If that report proves to be true, then the Trump leadership at Commerce will continue to be notably short-handed.  In fact, of the 27 top jobs at DOC—that is, those requiring Senate confirmation—the Trump administration has filled exactly one, that of Secretary Ross.

In the meantime, for most vacant positions, the function of the office must be fulfilled either by an Obama holdover, or by a careerist on an acting basis.  Thus we can see that each vacancy is a victory for the Deep State.

A newer tactic has been the creation of “rogue” Twitter accounts, purporting to be from disgruntled employees within an office.  An address called @AltNWS, for example, made a splash by detailing discontent within the National Weather Service, a part of NOAA.  That guerrilla account was written up, admiringly, in The Washington Post; that’s really hitting the big-time, Beltway-wise.  (The account has since been closed, for reasons unknown.)

Meanwhile, another Twitter account, Rogue NOAA, still exists.  Indeed, across the federal government there are hundreds, if not thousands, of “alternative” Twitter accounts, each claiming to be part of the federal “resistance.”  One supposes that with enough digging, and enough subpoenas, it would be possible to find out which ones are real.

Still, we might ask: Are these sorts of Deep State activities making a difference?   Are they truly hurting the Trump administration, or are they just paper cuts?  After all, it’s only the Commerce Department!  Yes, it’s only DOC—and so far, only a few minor skirmishes.

And yet as we head east, to our next destination within the Federal Triangle, we’ll hear that the sound of the heavy artillery is growing louder.  Next stop, EPA.