But after the evidence had been adjusted by tidal records gatekeepers at the global databank Permanent Service for Mean Sea Level (PSMSL) it suddenly showed a sharp and dramatic rise.

The whistle was blown by two Australian scientists Dr. Albert Parker and Dr. Clifford Ollier in a paper for Earth Systems and Environment.

The paper – Is the Sea Level Stable at Aden, Yemen? – examines the discrepancies between raw and adjusted sea level data in Aden, Karachi and Mumbai.

The authors expose how PSMSL  data-adjusters make it appear that stable sea levels can be rendered to look like they are nonetheless rising at an accelerated pace.

The data-adjusters take misaligned and incomplete sea level data from tide gauges that show no sea level rise (or even a falling trend).  Then, they subjectively and arbitrarily cobble them together, or realign them.   In each case assessed, PSMSL data-adjusters lower the earlier misaligned rates and raise the more recent measurements.  By doing so, they concoct a new linearly-rising trend.

Here is a before/after from Karachi: 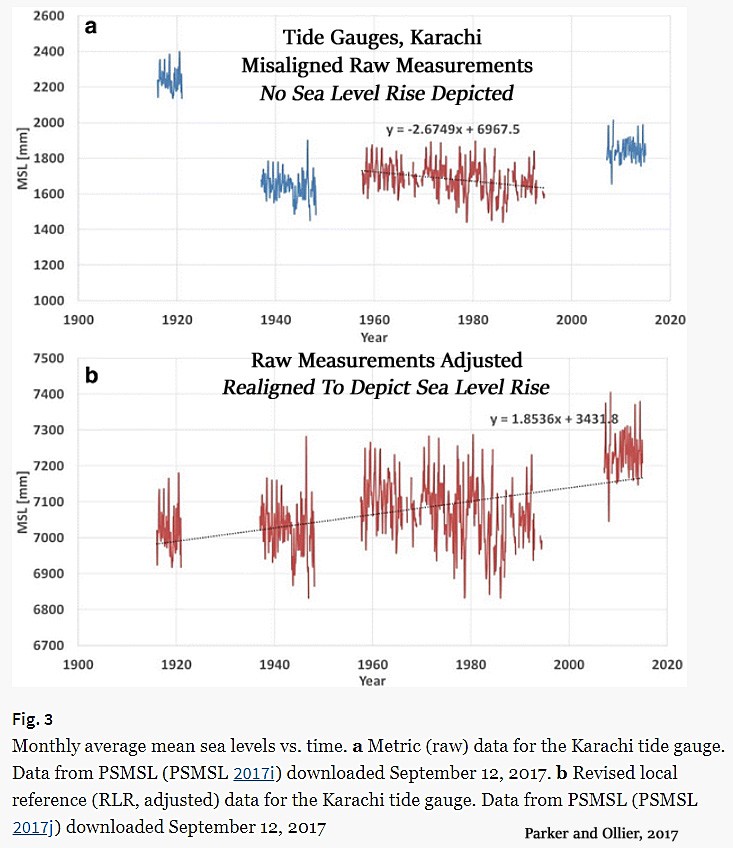 The authors do not mince their words. They refer to these adjustments as “highly questionable” and “suspicious.”

That’s because they can find no plausible scientific explanation for the adjustments.

As they explain at the beginning of their paper, it is hard to put together consistent sea level records covering a long time period. This is because tide gauges are often the result of multiple sets of data, taken over different time periods using different instruments, which are then spliced together.

What is proposed as a single record in databases such as the Permanent Service for Mean Sea Level (PSMSL) (PSMSL 2017a) is often the composition of data collected by different instruments, sometimes in different locations or over different time windows, with significant gaps in between one measurement and the others. This is the case of the Aden, Yemen tide gauge that is the only tidal location of the Arabian Peninsula spanning a time window long enough to infer a trend and acceleration of the relative sea level (assuming there was continuous measurement and no quality issue). In Aden, similar to Karachi and Mumbai and other tide gauges of the area, a single-tide gauge record is the result of multiple sets of data subjectively coupled together. While a new tide gauge is recording since about 2007, the alignment of the previous data is continuously changing.

So there is nothing per se wrong with PSMSL making adjustments in order to make the different datasets align.

What is wrong is the way that the scientists at PSMSL have adjusted them. In every case, they have revised them in order to make them produce a sharp upward trend in sea level rise – despite the fact that global records do not support this.

The truth, Parker and Ollier conclude in their paper, is that sea level has changed very little in the three sites examined:

The reconstructed tide gauge records of Aden, Mumbai and Karachi are perfectly consistent with multiple lines of evidence from other key sites of the Indian Ocean including Qatar, Maldives, Bangladesh and Visakhapatnam. The sea levels have been stable since the start of the twentieth century in Aden similar to Karachi and Mumbai.

But the official PSMSL data – as used by other global data-keeping bodies such as NOAA – claims that there has been a sharp increase.

In Aden, for example, the alarmists have turned a modest 1.21 mm/year rise into a 3.02 mm/year rise.

Per the US National Oceanic and Atmospheric Administration (NOAA) Centre for Operational Oceanographic Products and Services (NOAA 2017a), with data from an intermediate version of a single-tide gauge record by PSMSL we may call (n-1), the sea-level trend in Aden is + 3.02 mm/year based on the monthly average mean sea-level (MSL) results 1879–2011, Fig. 6a (image from NOAA(2017b) downloaded on September 13, 2017).

Using the online analysis tool of Burton’s sealevel.info (Sealevel.info 2017a), with data from the latest update of the PSMSL database that we may call version n, with 2 more years of data, but also with some other corrections, see the data before the year 1900 shifted up, the sea-level trend in Aden is + 1.35 mm/year based on the MSL results 1879–2013, Fig. 6b (image from Sealevel.info (2017b) downloaded on September 13, 2017). Worthy of note, the acceleration is now large and positive.

Again, there is no plausible scientific explanation for these adjustments.

As the authors put it:

“It is always highly questionable to shift data collected in the far past without any proven new supporting material.”

Indeed, but it is perfectly consistent with the behavior of alarmist scientists in other fields, notably those concerning surface temperature data records. As we have reported here before, there is copious evidence to suggest that the gatekeepers of global warming have consistently and shamelessly cooked the books and rigged the data in order to give the impression that “climate change” is a major and unprecedented phenomenon.

A major part of the global warming scare narrative is that melting ice caps will cause sea levels to rise at a dangerous and unprecedented rate, enveloping low-lying Pacific islands, flooding vulnerable countries like Bangladesh and perhaps one day drowning even places like Manhattan.

There is little if any scientific evidence that this is actually happening.

What’s extraordinary is the desperation of scientists at what ought to be impeccably neutral and trustworthy institutions such as NASA, NOAA and PSMSL to pretend that it is.

When alarmists in charge of surface temperature datasets make dishonest adjustments to exaggerate the appearance of global warming, it looks like corruption.

When alarmists in the entirely separate field of sea level measurement make precisely the same sort of dishonest adjustments in order to accord with the same global warming narrative, it starts to look like a conspiracy.