For example, Durbin’s lopsided proposal says Democrats will allow customs officials to buy commonplace $3,000 computerized license-plate readers for cheaply identifying cars as they pass through the border. But that agreement to buy the cost-saving devices is conditional on GOP Senators supporting the Democrats’  amnesty of 3.25 million ‘dreamer’ illegals  — plus millions of their illegal immigrant parents and chain-migration relatives — at the cost of at least $26 billion over the first ten years.

“The Democrats have made a big show of saying they are for border security, but all they are agreeing to are things that would be done in normal circumstances,” a Hill source said.

Durbin’s offer to accept cost-saving practices in exchange for an expensive amnesty suggests that he and the Democrats are contemptuous of the GOP Senators’ understanding of immigration issues and of their ability to negotiate a good deal.

The offer also indicates that Democrats hope to hide any notable concessions from GOP Senators and then bamboozle or bully President Donald Trump and GOP Senators to alienate their own supporters before the 2018 election by surrendering the immigration issue which won the 2016 election.

In reality, Trump and some GOP Senators are aiming for something much higher — legislation that would transform the nation’s immigration system by putting ordinary Americans ahead of ethnic lobbies, CEOs, investors, and immigrants. For example, Trump is pushing for an end to the visa lottery and to chain-migration, which would likely force CEOs and investors to provide more pay and training to blue-collar and white-collar Americans, and also to buy American-made labor-saving machinery.

Some GOP Senators believe Durbin’s token concessions are valuable, said the source. “The problem is that some of our members think these are major concessions — when in fact, they are just agreeing to preserve the status quo,” the source added.

Durbin’s contemptuous offer leaves his pro-amnesty allies in the GOP exposed to criticism that they have aligned themselves with anti-enforcement progressives who believe officials should be forced to track license numbers with pen and paper unless Trump agrees to an amnesty.

Yesterday DREAMers in #Yuma #Colorado went to @SenCoryGardner office to say thank you for sponsoring the Dream Act and asked for him to work to pass it before the end of the year! pic.twitter.com/tnhvU1vS02

GOP Senators, however, could quickly learn what is needed from Congress by contacting senior immigration officials including L. Francis Cissna, the director of U.S. Citizenship and Immigration Services, Tom Homan, director of U.S. Immigration and Customs Enforcement and Ronald Vitello, head of the U.S. Customs and Border Protection agency.

Officials from ICE, Customs and Border Protection and USCIS are at the Capitol to meet with senators, says Tom Homan from @ICEgov. Didn’t say which senators.

Democrats, moreover, are taking a huge risk. In 2013, Durbin pushed the “Gang of Eight” immigration act which provided so unfair and unpopular that the GOP picked up nine seats in 2014 and Donald Trump began his the path to the White House

Many polls show that the Democrats’ calls for amnesty are unpopular because they contradict Americans’ sense of fairness to other Americans. That pro-American pressure is hidden by business and is largely ignored by the media — despite the 2016 election results — but could play a large role in the pending 2018 election fights.

Business groups and Democrats embrace the misleading, industry-funded “nation of immigrants” polls which pressure Americans to say they welcome migrants.

The alternative “fairness” polls show that voters put a much higher priority on helping their families, neighbors, and fellow nationals get decent jobs in a high-tech, high-immigration, low-wage economy.

The Democrats’ negotiating position was provided to Breitbart News. The document shows in yellow which sections of Sen. John Cornyn’s watered-down border bill — S. 1757, Building America’s Trust Act — are acceptable to Durbin. Cornyn’s bill is part of the GOP’s SECURE Act, which is backed by Majority Leader Sen. Mitch McConnell. 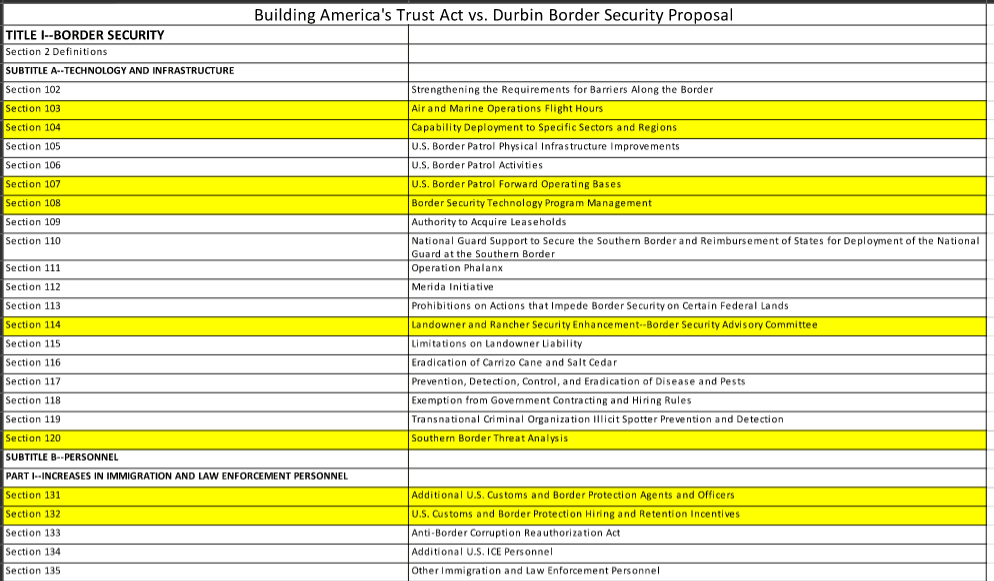 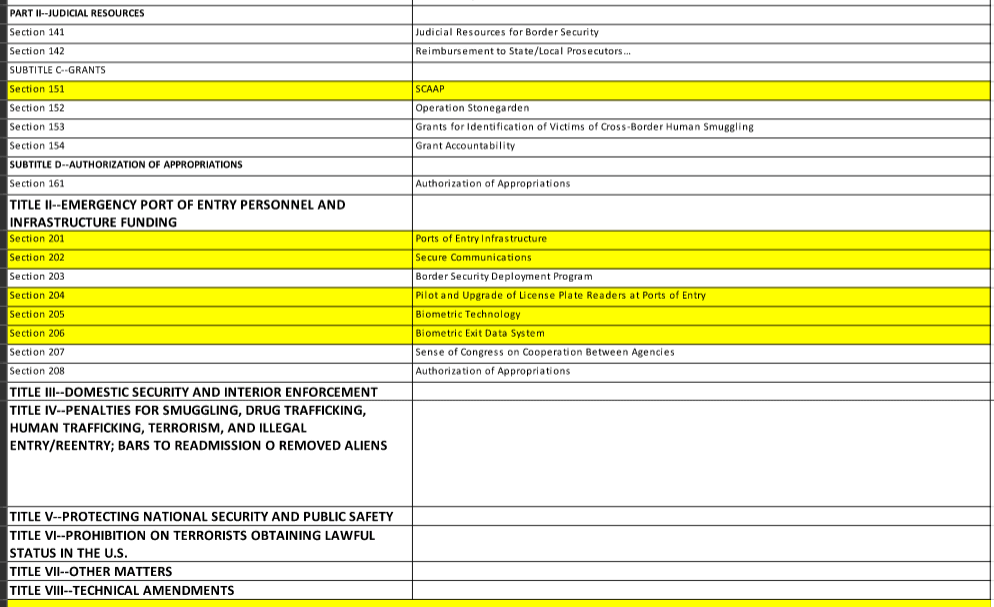 The Durbin-supported license-plate proposal is found in the yellow-marked Section 204 of Cornyn’s bill, “Pilot and Upgrade of License Plate Readers.” That section reads:

Not later than one year after the date of the enactment of this Act, the Commissioner of U.S. Customs and Border Protection shall upgrade all existing license plate readers on the northern border and the southern borders on incoming and outgoing vehicle lanes.

Cornyn’s bill is modest. It has already been panned by pro-Americans immigration groups for dropping important regulatory changes that would help officers enforce the nation’s popular immigration laws. In May, Jessica Vaughan, the policy director at the Center for Immigration Studies, said Cornyn’s bill “looks like more of a half-hearted attempt into fooling the public than a step forward in enforcement.” She continued:

Cornyn’s bill does little to build support the border wall, which would symbolically and practically cut off Democratic-run cities and GOP counties from the supply of cheap illegal-immigrant labor sought by political donors.

Also, Cornyn’s bill does not include anything about chain-migration, the visa lottery, or other measures that would shift wealth away from wealthy investors and towards employees.

So Durbin OKs the spending on license-plate devices in Cornyn’s bill, along with a proposal to fly robot-aircraft for 120 hours per week, a new program for the federal government to pay for state prisons, plus an order to equip border officers with radios, the establishment of a ” National Border Security Advisory Committee,” and the hiring of “1,675 full-time equivalent agents.”

Yet Durbin’s yellow-marked list shows that he rejects any substantial legal changes in Cornyn’s bill. For example, Durbin shows no yellow-mark support for Section 102 of Cornyn’s bill on “tactical infrastructure”:

SEC. 102. STRENGTHENING THE REQUIREMENTS FOR BARRIERS ALONG THE SOUTHERN BORDER.

(1) by amending subsection (a) to read as follows:

“(a) In General.—The Secretary of Homeland Security shall take such actions as may be necessary (including the removal of obstacles to the detection of illegal entrants) to construct, install, deploy, operate, and maintain tactical infrastructure and border technology in the vicinity of the United States border to deter, impede, and detect illegal activity in high traffic areas.”

Durbin also rejects Section Section 1o6, which merely urges — but does not require — the border agency to patrol near to the border:

Durbin opposes Section 109 which would allow the federal government to buy up land along the border:

Notwithstanding any other provision of law, if the Secretary of Homeland Security determines that the acquisition of a leasehold interest in real property and the construction or modification of any facility on the leased property are necessary to facilitate the implementation of this Act, the Secretary may—

Durbin opposes the hiring of more people for immigration enforcement far from the border, as required in Section 134:

(A) to increase the number of criminal prosecutions for unlawful border crossing in each and every sector of the southern border by not less than 80 percent per day, as compared to the average number of such prosecutions per day during the 12-month period preceding the date of the enactment of this Act, by increasing funding for—

More important, Durbin’s yellow-marked list also excludes all the elements of Cornyn’s bill that are designed to help enforce immigration law inside the United States, as described in Section III, Section IV and Section V of Cornyn’s bill.

These three sections are important because they change federal laws to help close loopholes which are used by illegal immigrants and their lawyers to block deportation procedures — regardless of how much money is spent by Congress on concrete and cameras, jails, border officers, lawyers, and immigration courtrooms.

One critical section — Section 321 — which Durbin opposes would change the law to allow border officials to quickly block the entry of so-called “Unaccompanied Alien Children.” Tens of thousands of people have used this UAC loophole since 2011, including many MS-13 members and adults escorted by “coyote” human smugglers.

Durbin opposes Section 401 which would impose jail penalties on coyotes, he opposes the easier deportation of criminal migrants enabled by Section 404, and he is against jail penalties for repeat border-crossers in Section 406,

Durbin even opposes the entire Section VI of Cornyn’s bill, titled “Prohibition on Terrorists Obtaining Lawful Status in the United States,” which includes:

DURBIN says Senate #DACA negotiators—who are meeting almost daily now—are not close to a deal: “We’ve got a long way to go and we’re running out of time.” He expects the White House to send a list of policy demands on FRIDAY.

The Washington-imposed economic policy of growth via mass-immigration floods the market with foreign labor, spikes profits and Wall Street values by cutting salaries for manual and skilled labor offered by blue-collar and white-collar employees. It also drives up real estate prices, widens wealth-gaps, reduces high-tech investment, increases state and local tax burdens, hurts kids’ schools and college education, pushes Americans away from high-tech careers, and sidelines at least 5 million marginalized Americans and their families, including many who are now struggling with opioid addictions.