There were likely 1.8 million illegal and legal immigrants who entered the United States in 2016, a new analysis from the Center for Immigration Studies reveals.

Based on immigration patterns, the researchers found that a total of 1.8 million illegal and legal immigrants likely came to the U.S. in 2016, the largest number of foreign nationals entering the country in a single year since 1999.

Between 2011 and 2015, foreign nationals arriving in the U.S. from some of the most dangerous regions in the world dramatically increased.

The study comes as Americans continue having to grapple with an increasing foreign-born population that puts America’s working and middle class at a disadvantage, as low-skilled foreign nationals dominate the immigration system.

As Breitbart News reported, ten years of unlimited chain migration to the U.S. has exceeded two years of all American births, with roughly 9.3 million foreign nationals coming to the U.S. solely for family reunification since 2005.

As the White House has noted in a new ad campaign that seeks to end chain migration, the number of extended-family foreign nationals who have resettled in the U.S. in the last decade is more than the total population of Los Angeles, Chicago, Dallas, San Francisco, and Cleveland combined.

A decade of immigration to the United States by which new immigrants can bring an unlimited number of foreign relatives with them has exceeded two years of all American births.

Additionally, the foreign-born population in the U.S. has boomed to an unprecedented 44 million, Breitbart News reported. 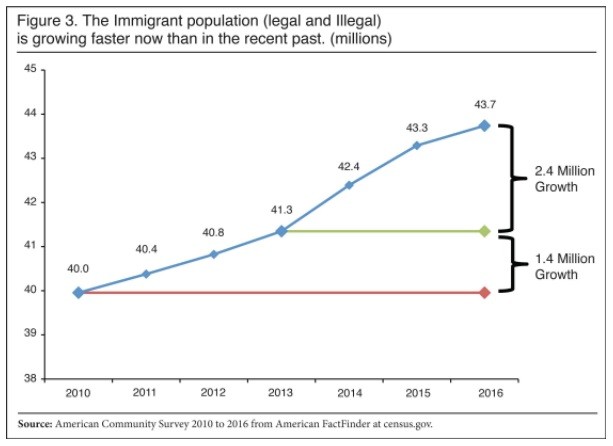 Research conducted by the Center for Immigration Studies’ Steven Camarota reveals the massive scope of the U.S. immigrant population, which has contributed to keeping American wages stagnant while driving up costs of social services.

Camarota’s research reveals that in 2016, there were between 43 and 45 million immigrants in the U.S.,  nearly quadruple the immigrant population in 2000.

Mexico, as noted by Camarota, has the largest group of legal and illegal foreign nationals in the U.S., with 1.1 million immigrants from the country arriving in the U.S. between 2010 and 2016. Mexican nationals make up roughly one in eight new arrivals to the U.S.

Mass immigration to the U.S. has come at the expense of American taxpayers, blue-collar workers, and the working and middle class – which often has to subsidize immigration levels, as well as being forced to compete with an increasing number of cheaper, foreign workers.