WASHINGTON, DC – Former United States Ambassador to the United Nations John Bolton says the Iranian regime has the advantage of guns, which it has used against the freedom-craving people of Iran over the last two weeks of protests and uprisings.

The “obvious advantage the regime has is, it has the gun,” Bolton said at a panel discussion hosted by the Endowment for Middle East Truth (EMET) at the Rayburn House Office Building on Tuesday.

Guns are restricted to the Iranian military (Artesh), high-level police, and the secret service (Sepah Pasdaran).

So far, media reports have indicated that at least 22 people were either shot dead by Iranian regime operatives or killed since protests began on December 28, in what is seen as the largest uprising since the 2009 “green revolution” took place. A young man reportedly died while held in prison after he was arrested for protesting.

“What has just happened inside Iran the past 10 days is a turning point in history,” Bolton, who is a fellow at the American Enterprise Institute said. “I think it’s very clear that these outpourings of popular opinion present a dagger pointed at the heart of its mullah’s regime. They have crossed an important line here.”

He noted that this movement is a much greater threat than the green movement of 2009 adding, “there is no set direction or coordination yet which has its pluses and minuses.”

He said that, while it came as no surprise that Iran’s government did not fall at the first sign of opposition, the growing dissatisfaction over economics and human rights issues were part of the larger equation that will ultimately cause the regime to come tumbling down. Bolton said, “economic dissatisfaction is a major element of it; not the dissatisfaction that the media in New York think.” He added, “I think what the people are reflecting is the result of decades of mismanagement by the ayatollahs” and “that has resulted in massive corruption.”

In addition to that, there is growing ethnic dissatisfaction in Iran. Only 53 percent of the country’s population is ethnically Iranian, according to Bolton. Iran is also home to Kurds, Balochis, Azerbaijanis, Turkmens, and Arabs, among others.

A 2008 study suggests 61 percent of the population was Persian at the time, which indicates an influx of migrants into Iran over the last ten years.

“This regime is unpopular,” Bolton said. “They’ve reached a new plateau and the question is now what, if anything, the United States, should be doing.” He said, “The dregs of the Obama administration responded by saying this is not about us. ‘This is about Iran. We should be quiet.'”

The Obama administration’s decision to remain silent as millions of Iranians called for support in 2009 was seen as an ultimate act of betrayal.

Bolton commended President Donald Trump for tweeting and speaking out in support of the Iranian people — a stark move away from the previous administration:

Such respect for the people of Iran as they try to take back their corrupt government. You will see great support from the United States at the appropriate time!

The people of Iran are finally acting against the brutal and corrupt Iranian regime. All of the money that President Obama so foolishly gave them went into terrorism and into their “pockets.” The people have little food, big inflation and no human rights. The U.S. is watching!

Iran is failing at every level despite the terrible deal made with them by the Obama Administration. The great Iranian people have been repressed for many years. They are hungry for food & for freedom. Along with human rights, the wealth of Iran is being looted. TIME FOR CHANGE!

“I wish our friends in Europe were a little more outspoken about it,” Bolton said. “The standard position of the Ayatollah is to blame the West and the United Kingdom.”

“We’ve got a strategic reason here to want to see this regime overthrown. And I’ve been saying over 10 years that it ought to be American policy to see the overthrow of this regime,” Bolton said.

He said: “The real $64 question” is “what to do about the Iranian nuclear deal.” Trump faces the decision about whether he will waive out of the deal by Friday and whether the United States will slap sanctions on the entities that received economic relief under the previous administration. “The sooner the president abrogates it entirely and creates a new international reality, the better.”

Bolton said, “I would without hesitation abrogate the nuclear deal, call the sanctions into effect … This is the last point at which we should step aside and not try to take advantage of it.”

Congressman Doug Lamborn (R-CO) and Congressman Steve King (R-IA) were also at the panel discussion. “The people of Iran just want freedom and they’re not getting it from this regime. And we missed such a golden moment in 2009,” Lamborn said. “We can’t miss that opportunity now.” 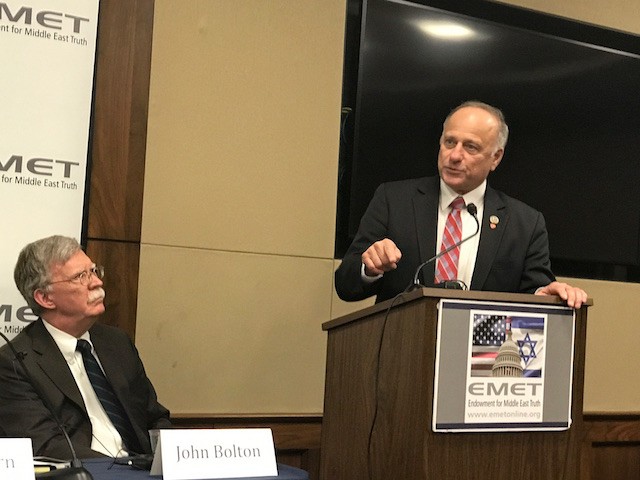 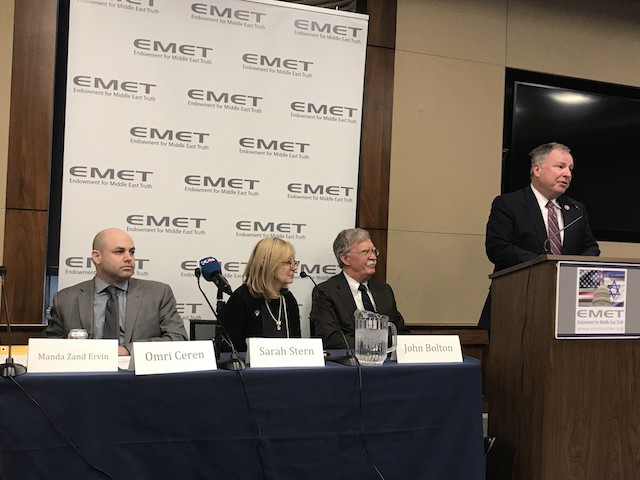 Political analyst Omri Ceren, who serves as an adviser to The Israel Project, said, “the technical decision the president faces is whether or not to waive a series of sanctions. As you remember, the Iran deal did not go over particularly well in Congress.” He added, “no sanctions were repealed. Instead, the then President [Barack Obama] availed himself of a bunch of waivers, including four waivers that need to be renewed … The question is whether or not he waives those sanctions and if he stays in the deal or not.”

He noted that sanctions on the Central Bank of Iran, “which we believe is engaged in a variety of terror financing,” and Supreme Leader Ayatollah Sayyid Ali Khamenei’s personal empire, “his business empire worth tens of billions of dollars, were granted as nuclear relief” under Obama.

Ceren said that matters “because last week protesters took the streets and refocused attention on two things that were not supposed to happen.” He said America was told that the Iranian regime would spend the sanctions relief money on “guns and roads, not butter. We now know that’s not true,” he said. “The regime spent its windfall on overseas adventurism and the protesters are calling them out for it.”

The second thing that was punctured was the idea that there are moderates versus conservatives in Iran. Instead, something that the Trump administration has been saying for months – was validated – is that it is all one big regime with reformists and conservative pragmatists and conservatives and hardliners all on the same team. Those are two things that used to be a debate but are no longer a debate because we saw reformists come out against the protesters on behalf of the supreme leader.

In conclusion, Ceren made it clear that if the Trump administration takes former Ambassador Bolton’s advice to withdraw from the deal, they must additionally “go after the regime’s assets and entities that were technically delisted and receive sanctions relief.” He said that, on Friday, the Trump administration must decide if, in light of the fact that the regime is one large entity, the United States will sanction entities that received relief under the Obama administration’s Iran deal for human rights violations.

She said, “Nobody in America anywhere talks about these things and nobody knows about what the Iranian women do … We were begging for a conference against gender apartheid. What’s going on [in Iran] is an absolute gender apartheid,” she said. “The women of Iran deserve much more; they should not be slaves of men. Under Sharia law, they are properties of men.”

She said, “Rouhani is nobody. In Iran, there is one leader and that is Khamenei … Rouhani was elected by Khamenei and put up there and told the people, ‘you vote for him.'”

Ervin also noted that the Voice of America’s Iran desk is “sadly not with the people of Iran.” She noted how over the last eight years, “they would not bring any one of my kind, women’s rights activists on Voice of America at all. They bring in semi-clergies or the clergy’s sons who are going to Harvard … or members of NIAC like Trita Parsi,” whose organization is seen as lobbying for the Iranian regime. “And they had control of the White House during Obama’s presidency.”

She concluded her remarks by saying, “If you look at every event [taking place in Iran], women are the leaders.” She added, “Iranians have never accepted the Shiite clergy.”