So now we know: it was mental illness that caused the Danforth Shooter to gun down 15 people in Toronto, Canada, on Sunday night, killing two of them.

That’s a relief. For one nasty moment, it looked like it might be another atrocity committed in the name of the Religion of Peace – especially when the shooter was grudgingly, belatedly revealed by the authorities to be in possession of the not obviously Hindu, Jewish or Christian name Faisal Hussain.

But no, thank heavens, it was mental illness all along. At least according to the killer’s family and the progressive media. And I for one believe them. When I look around I see an epidemic of mental illness going round – not just among all those young men with coincidental Muslim names going postal everywhere from Orlando to Nice and now Toronto but also at the highest levels in politics.

This is a statement from the Hussain family: 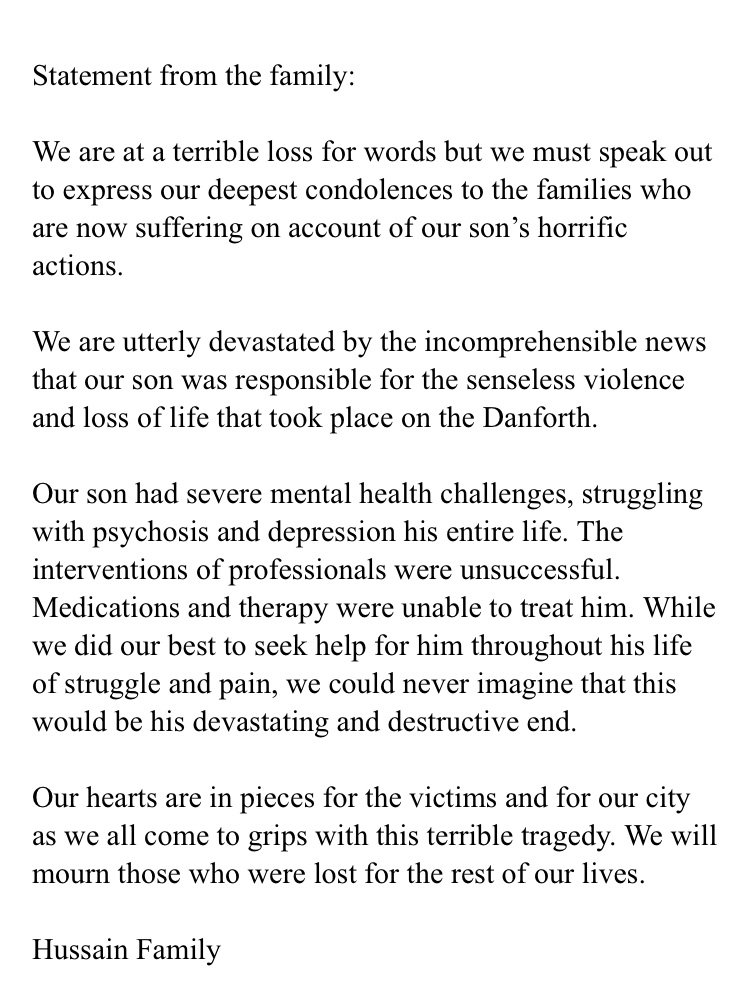 Among the most badly afflicted is President Bieber of Canada. The generous interpretation of “Justin Trudeau”, as this tragically delusional guy likes to style himself, is that he’s just an entertaining Walter Mitty character who adds enormously to the gaiety of nations: one minute he’s a feminist; the next an infamous groper; one minute his dad was the President of Cuba, the next the Prime Minister of Canada; one minute, he’s dressed up as a cowboy, the next he thinks he’s Indian; and so on.

Unfortunately, by some terrible accident, President Bieber happens to be the actual current leader of an actual serious G7 nation. So his serial fantasies aren’t merely a problem for him, his family and his overworked therapist. They are also a very real issue for 37 million Canadians and the many, many millions more who have to interact with the country President Bieber is slowly but surely transforming into the Gentle, Friendly Basket Case to the North of the U.S.

His decision to welcome a bunch of White Helmet alleged refugees from Syria is a case in point.

If everything you believe in Hollywood is true, then this ought to be a great idea. After all, as recently as 2016, the White Helmets were portrayed in a documentary as the noblest, most selfless heroes of the Syrian Civil War, constantly risking their lives to rescue victims of urban warfare from the rubble regardless of their religious or factional affiliation. And was it not only last year that the Academy of Motion Picture Arts and Sciences endorsed this version of reality by giving The White Helmets the Oscar for Best Documentary Short.

What could possibly go wrong with a scheme to replace all the Canadians being bumped off by victims of mental illness with an enriching influx of selfless heroes from Syria?

Well, one thing that could possibly go wrong is if it turned out that the Hollywood version of events was total fiction. Or bullshit terrorist propaganda, if you prefer.

Whatever the claims made for the White Helmets in the documentary – and unquestioningly accepted by the compliant liberal media – it would seem that there are in fact serious doubts about the integrity of these ‘heroes’.

Journalist Vanessa Beeley has done much to expose their deception:

The White Helmets also claim to be neutral and unarmed, which is far from the truth. As Vanessa Beeley explains, “If we look at their claims to be neutral, they are embedded entirely in terrorist-held areas whether it is predominantly Al-Nusra Front or ISIS or any of the various associated brigades of terrorists that take their command very much from Al-Nusra Front, that is where White Helmets are exclusively.”

Beeley noted the White Helmets also, “provide medical care for the terrorists, they funnel equipment in from Turkey into the terrorist areas (…) They’ve been filmed participating and facilitating an execution of a civilian in Aleppo. They post celebratory videos to their social media pages of the execution of civilian Arab soldiers.”

Of course it’s hard to sift fact from fiction in a civil war as complex as Syria’s, especially when there are so many big competing players in the background from the UK and the U.S. to Israel, Russia and Iran. But there is plenty of video evidence online which strongly suggests that White Helmets members have been involved in brutal atrocities and fake news propaganda footage, that they are not apolitical but aggressively partisan and that they are associated with some very scary Islamist terror groups.

If I were Canadian, I know exactly how disgusted I’d feel if my country was planning to rehome some of the 422 White Helmet and family members who have just been rescued from Syria and temporarily evacuated to Jordan.

And the reason I know exactly how disgusted is that my own country the UK is promising to welcome some of them too.

Here is UK Foreign Secretary Jeremy Hunt. Apparently he thinks it is something worth boasting about – which indicates to me something rather depressing: British foreign policy is currently in the hands of someone who shares President Bieber’s mental illness affliction.

Fantastic news that we – UK and friends – have secured evacuation of White Helmets and their families – thank you Israel and Jordan for acting so quickly on our request. The WH are the bravest of the brave and in a desperate situation this is at least one ray of hope

These are worrying times indeed when random people on Twitter are more clued up about foreign policy issues than the minister supposedly in charge of them.

So you're bringing these terrorists to Britain? pic.twitter.com/r1k3GZmnMs

Here’s a final scary thought. Let’s just suppose for a moment – perish the thought – that all these tragic lorry massacres and grenade massacres and gun massacres and bomb massacres and knife massacres committed by people with Muslim names aren’t the result of mental illness, but are in fact manifestations of an insurgency war being waged on the West by the Religion of Peace.

Doesn’t that make politicians who want to invite more of these people in rather dangerous to our wellbeing? And shouldn’t we make it our holy duty to oust these lunatics from office as soon as is decently possible?