Pro-migration advocates are trying to reopen a catch-and-release loophole for the growing number of pregnant migrants who arrive at the border, after President Donald Trump narrowed the loophole early this year.

The effort builds on the Democrats’ success in using emotional images of detained migrant parents and their children to undo Trump’s “zero tolerance” border policy, and it may help Democrats gain support among suburban voters who are disturbed by televised coverage of the sometimes-distressing process of deporting migrants.

From mid-December 2017 to early-April 2018, almost 600 pregnant migrants were caught crossing the border, and almost 40 were in detention on April 7, the Department of Homeland Security told Breitbart News. The agency declined to say if the pregnant migrants were returned home or were released into the United States.

The inflow of pregnant migrants in the first quarter of 2018 has jumped to 292 women, up by one-third over 2017 numbers, says a July 13 letter from four Democratic Senators to the Inspector General at DHS who asked for an investigation of the agency’s practices.

In March, amid the rise, Trump’s DHS deputies began ending the automatic-release policy for all pregnant women which was established by President Barack Obama in 2016. According to the  DHS policy, only third-trimester pregnancies are grounds for release:

ICE has ended the presumption of release for all pregnant detainees … Generally, absent extraordinary circumstances, ICE will not detain a pregnant alien during the third trimester of pregnancy.

Migrants are aware of the pregnancy loophole, and some make the dangerous trip north once they are pregnant. For example, the Getty image above shows a migrant from El Salvador, seven months pregnant, who turned herself over to border agents on December 7, 2015, near Rio Grande City, Texas. According to the Getty photographer, “many pregnant women, according to Border Patrol agents, cross illegally into the U.S. late into their terms with the intention of birthing their babies in the United States.”

In August, a British TV network followed a pregnant woman and her husband to the border. Once at the border the couple separated to improve their chances of each getting into the United States:

The nine-month pregnancy-loophole push is being supported by Democratic Senators and Representatives, pro-migration groups, and immigration lawyers and their media allies. Twenty-three Democratic Senators are co-sponsoring the “Stop Shackling and Detaining Pregnant Women Act” which says the Department of Homeland Security:

(A) shall not detain a person under any provision of the Immigration and Nationality Act (8 U.S.C. 1101 et seq.) during pregnancy or postpartum recovery, pending a decision with respect to whether the person is to be removed from the United States; and

(B) shall immediately release any detainee found to be pregnant.

“It is absolutely unacceptable that in our country pregnant women are being detained, shackled, and denied the care they need to have a healthy pregnancy,” claimed Washington Sen. Patty Murray in July. “The Trump Administration should immediately reverse course on this heartless and dangerous policy that puts the health of mothers and infants at risk.”

gives ICE officials the authority to freely detain pregnant individuals and determine their release on a case-by-case basis. Given ICE’s record of not releasing other immigrant populations, we can expect them to also keep pregnant women indefinitely detained. We at the National Latina Institute for Reproductive Health (NLIRH) believe this policy change was made to boost private prison company profits and to meet the goals of an anti-immigrant agenda …

If we want this barbaric practice to end, we must abolish ICE and the institutions that are perpetuating unjust practices. Efforts to abolish ICE seek to overhaul the system in the long run, which endangers the lives of our community members held in these facilities, and in the interim we demand ICE adopt a presumption of release for pregnant detainees. 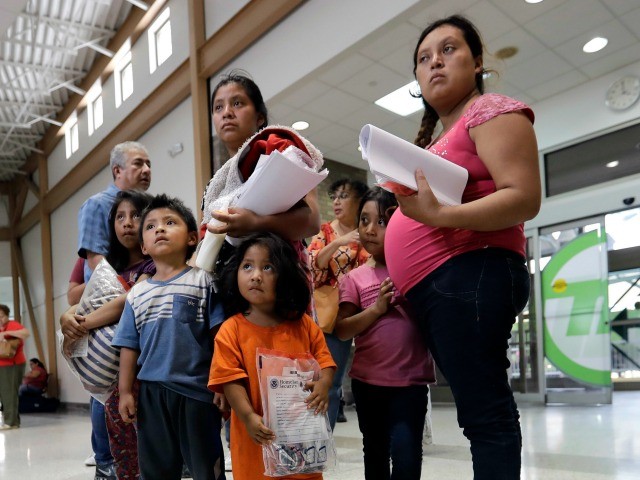 Migrants from Guatemala, Meregilda Mejilla, right, and her daughter Maricelda, 6, wait with Ingrid Yanet Lopez Hernandez, left, and her children Jazmine, 7, Christian, 5, and Cristle Ordonez, 2, inside the central bus station after they were released by U.S. Customs and Border Protection, Sunday, June 24, 2018, in McAllen, Texas.

One unnamed poster-child for the new policy is being offered up by immigration lawyers, via the Daily Beast website, in an article titled “ICE Is Detaining a Woman Who Is 32 Weeks Pregnant”:

The woman arrived in the United States on July 24 of this year, along with her husband and three children, according to Katy Murdza, advocacy director of the Dilley Pro Bono Project, which is representing her. The family came from Mexico seeking asylum. They were initially put in Customs and Border Protection custody. Then the father was sent to one ICE detention facility, and the mother and three children—all under age 12—were sent to the Dilley family detention center in Texas.

After arriving at the detention center on July 27, the woman––whose name is being withheld because of her tenuous immigration status––had troubling symptoms, including fatigue, insomnia, and abdominal pain. And, for the first time in her pregnancy, she began having serious vaginal bleeding. Her baby is due to be born on Sept. 19, putting her almost halfway through the third trimester of her pregnancy.

Before the Trump administration, ICE had a policy––one it sometimes violated––against detaining pregnant women. In March, the Trump administration [has] announced that the policy had changed, and that pregnant women would not automatically be released from ICE custody. But in that announcement, the agency said that “Generally, absent extraordinary circumstances, ICE will not detain a pregnant alien during the third trimester of pregnancy.”

The article was amplified by pro-migration advocates.

ICYMI: ICE Is Detaining a Woman Who Is 32 Weeks Pregnant https://t.co/uQlN7JS7mX

However, Trump policy has made it more difficult for pregnant migrants to slip into the United States, pro-migration activists told Buzzfeed News in July:

Pregnant women were often released from CBP centers faster than other detainees, particularly after August 2016, when ICE issued a policy limiting detention of pregnant women to only “extraordinary” circumstances or cases of mandatory detention. Often it took only a phone call to the center to get a pregnant woman released on parole, Linda Rivas, the executive director of Las Americas Immigrant Advocacy Center, told BuzzFeed News. After Trump entered the White House, these calls stopped working, she said. And after the new policy was announced, advocates stopped having a reason to think they would.

In a statement to Breitbart News, DHS said:

To better align with the President’s Executive Order, ICE has ended the presumption of release for all pregnant detainees. Instead, as with all detainees except those in cases of mandatory detention, ICE will complete a case-by-case custody determination taking any special factors into account. This does not mean that all pregnant aliens will be detained; only those whose detention is necessary to effectuate removal, as well as those deemed a flight risk or danger to the community. Generally, absent extraordinary circumstances, ICE will not detain a pregnant alien during the third trimester of pregnancy. ICE detention facilities will continue to provide onsite prenatal care and education, as well as remote access to specialists for pregnant women who remain in custody. 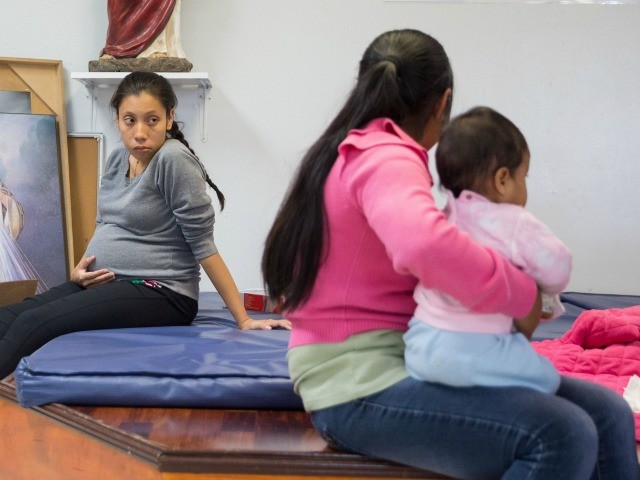 A late-term pregnant migrant released from detention in June, 2018, in McAllen, Texas.

U.S. Immigration and Customs Enforcement (ICE) is committed to ensuring the health, safety, and welfare of all those in our care. In accordance with ICE’s rigorous performance-based national detention standards, all woman up to age 56 are screened for pregnancy shortly after being processed into the agency’s detention facilities. In cases where the intake screening results are in question, further lab tests will be ordered to confirm a negative or positive pregnancy result. In addition to pregnancy screenings at intake, ICE detention facilities provide onsite prenatal care and education, as well as remote access to specialists for pregnant women who remain in custody.

ICE makes custody decisions on a case-by-case basis, following a comprehensive review of the circumstances including any known medical conditions. In making such determinations, ICE Enforcement and Removal Operations officers weigh a variety of factors, including, but not limited to, the person’s criminal record, immigration history, ties to the community, risk of flight, and whether he or she poses a potential threat to public safety.

When positive pregnancy test results are received, this information is entered into the detainee’s health record, so that appropriate medical care is provided.  For non-IHSC staffed facilities, the IHSC Field Medical Coordinator (FMC) assigned to the facility is notified.  In addition, local ICE Enforcement and Removal Operations (ERO) Field Office leadership is also notified of any pregnant females in custody and will ultimately determine if detainees should be transferred to other facilities or released.

All detainees, determined to be pregnant, are provided appropriate education, pre-natal care, and post-natal care.  Such care includes referral to a physician specializing in high-risk pregnancies when high risk pregnancy is indicated.

IHSC providers must provide relevant laboratory results and objective measurements (e.g., fetal heart tones rate, fundal height measurement) to the obstetrician to facilitate continuity of care.  Medical providers must see pregnant detainees/residents on a monthly basis, or more often, based on risk factors or the recommendation of the obstetrics specialist.

At all non-IHSC staffed facilities, detainees are evaluated and treated pursuant to the contractually applicable detention standards.