Cohen tweeted — then soon deleted — a response to presidential biographer Jon Meacham shortly after Trump’s video address to the nation: 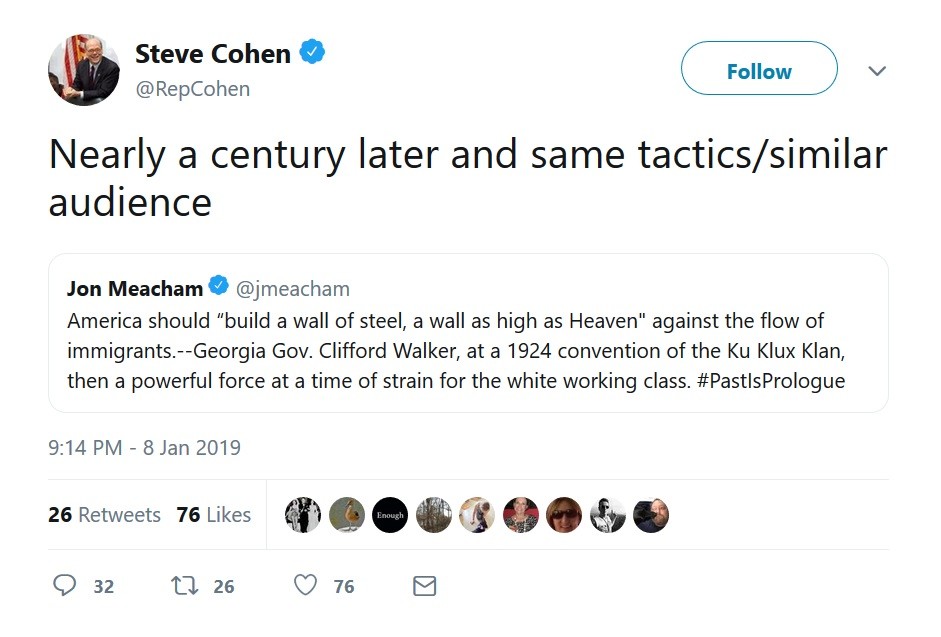 There is a #NationalEmergency ! It’s Donald Trump!

Cohen also derided Americans as “plain folks of the land” whose inner souls are embodied by “a downright and complete narcissistic moron” like Trump:

Cohen’s now-deleted post was a response to one from Jon Meacham, who, hours before Trump’s address to the nation regarding border security, linked calls for a border wall to the Ku Klux Klan:

America should “build a wall of steel, a wall as high as Heaven" against the flow of immigrants.–Georgia Gov. Clifford Walker, at a 1924 convention of the Ku Klux Klan, then a powerful force at a time of strain for the white working class. #PastIsPrologue

During a discussion panel with former President Barack Obama and former Secretary of State James Baker in November, Meacham refused to state Trump’s name in a discussion of the president’s policies.

Both Meacham and Obama refused to say Trump’s name, despite both referring to him implicitly. “He’s Voldemort. I’m not going to say his name,” Meacham said of Trump while asking Obama a question about Trump’s presidency.

Also in November, Meacham said Chief Justice John Roberts had a “moral obligation” to speak out against Trump.

Meacham is regularly featured across cable and network television news as a non-partisan and politically objective analyst.