Pro-life members of Congress and activists held a press conference on Tuesday to respond to the Senate’s failure to pass the Born-Alive Abortion Survivors Protection Act, citing shock that it went down in a 53–44 vote, with only Democrats voting against it.

Two House members at the press conference were also obstetricians, who have spent a career helping women give birth to healthy babies.

“I could have never in my wildest, worst nightmares, dreamed that I would have to come up here one day and fight harder to protect newborn babies than I did as a physician,” Rep. Roger Marshall (R-KS) said. “In my wildest dreams, I would have never dreamed of an America where we didn’t value a human life.”

“It’s beyond me to think that that’s even possible,” Marshall said. “Call it infanticide. I call it murdering little babies.”

Rep. Michael Burgess (R-TX), who is also an obstetrician, said it was hard to accept that aside from three Democrats — Sens. Bob Casey (PA), Doug Jones (AL), and Joe Manchin (WV) — the Senate was unable to muster the 60 votes needed to send the bill to President Donald Trump.

“We hear from the Democrats continually as they criticize our president. They’ll say, ‘That’s not who we are.’ Well, last night they showed us who they were,” Burgess said. 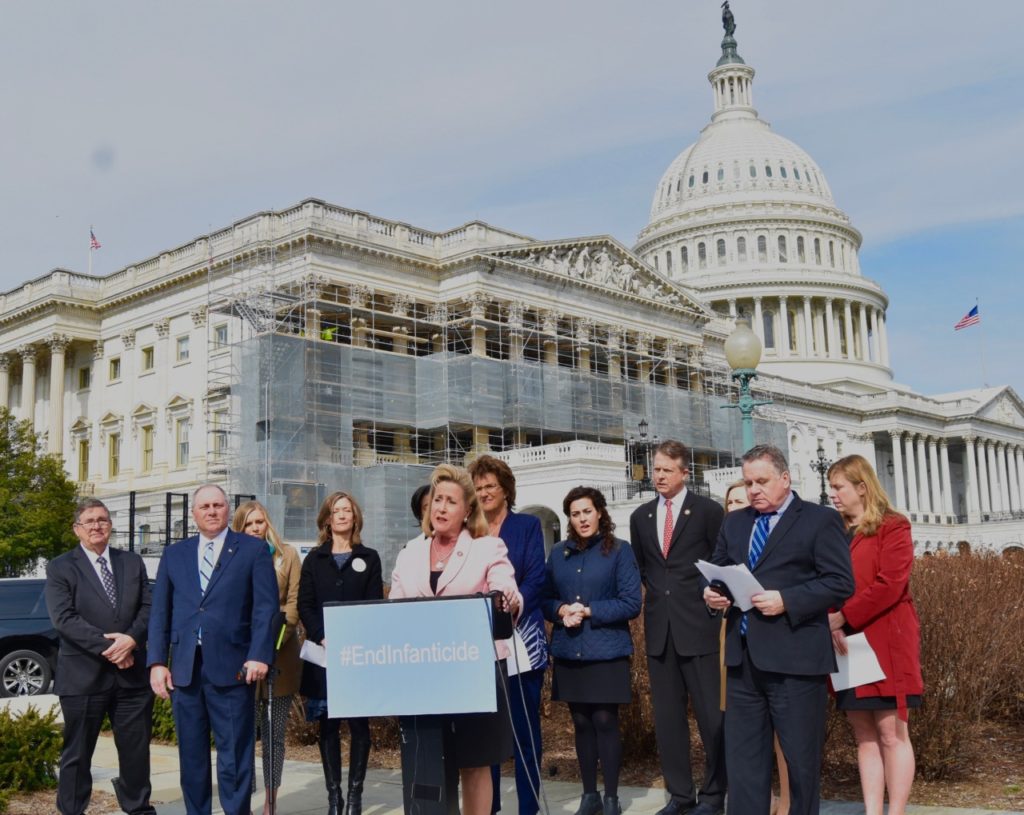 Rep. Ann Wagner (R-MO) spoke about the failure of the Born-Alive Abortion Survivors Protection Act with other pro-life lawmakers, including House Minority Whip Steve Scalise (R-LA) (second from left), and activists at a press conference at the Capitol on Tuesday. (Penny Starr/Breitbart News)

Smith, who explained that the legislation would require criminal prosecution of an individual who failed to aid an abortion survivor, but not the woman who had the abortion, said these babies face death after birth across the country.

Smith told the story of a Florida woman, Sycloria Williams, who delivered a baby at 23 weeks before the abortionist had attended her.

“According to [Williams’] lawyer, ‘She came face to face with a human being, and that’s everything,’” Smith said.

“The clinic owner took the baby, who was gasping for air, cut her umbilical cord, threw her in a biohazard bag and put the bag in the trash,” Smith said.

“Sycloria later had a funeral for her baby girl, who she named Shanice,” Smith said.

Smith said the law would provide protections for babies like Shanice and recourse for mothers like Williams.

Smith said that, according to the Centers for Disease Control and Prevention (CDC), in the state of Florida where Williams lives, 143 babies over ten years died after being born alive following an attempted abortion.

Babies born alive after abortion attempts continue to occur, according to documents reviewed by Live Action News. Despite only a handful of states requiring these reports, Centers for Disease Control data reviewed by the Charlotte Lozier Institute found that “[N]ationwide, between 2003 and 2014 at least 143 babies died after being born alive during botched abortions, though the CDC also states this could be an underestimation.”

Consistent with the abortion lobby, Democrat senators attempted to characterize the bill as one that would block a woman’s right to choose abortion, rather than one that would require medical treatment for an infant born alive after a failed abortion.

Rep. Ann Wagner (R-MO), who sponsored the House bill, said she was “horrified” when it failed to pass in the Senate.

“We are fighting for lifesaving care for babies who are born alive,” Wagner said.

Trump tweeted about the failed legislation before he left the country to meet with North Korean dictator Kim Jong-un in Vietnam.

Senate Democrats just voted against legislation to prevent the killing of newborn infant children. The Democrat position on abortion is now so extreme that they don’t mind executing babies AFTER birth….

Lawmakers said at the press conference that they hope to get enough signatures in the coming months on a discharge petition to force another vote on the legislation.