Nearly one million migrant children could enter the United States, either unaccompanied or with their border crossing parents, before the 2020 election if projected rates of illegal immigration pan out, new research finds.

Current illegal immigration projections by Princeton Policy Advisors researcher Steven Kopits predicts that there could be about 1.28 million border apprehensions this calendar year — a rate of illegal immigration that would exceed every fiscal year of former Presidents George W. Bush and Obama.

Kopits’ finds that up to 300,000 migrant children could enter the country by the time school begins in September for most students under a scenario where illegal immigration continues at projected rates throughout the next year and a half.

Assuming 80 percent of these migrant children enroll in school, the U.S. could be faced with absorbing 240,000 new migrant school students across the country –and specifically states like California, New York, Texas, Florida, Georgia, Illinois, and New Jersey — this coming school year, alone.

For the 2019 to 2020 school year, for instance, California would be forced to absorb about 50,000 new migrant students. Likewise, Texas would see an influx of about 36,000 migrant students.

Fast forward to the beginning of the next school year, September 2020 to June 2021, and the U.S. could have nearly a million new migrant children in the country before the 2020 presidential election, about 800,000 of which could enroll in school systems, under the mass migration scenario. 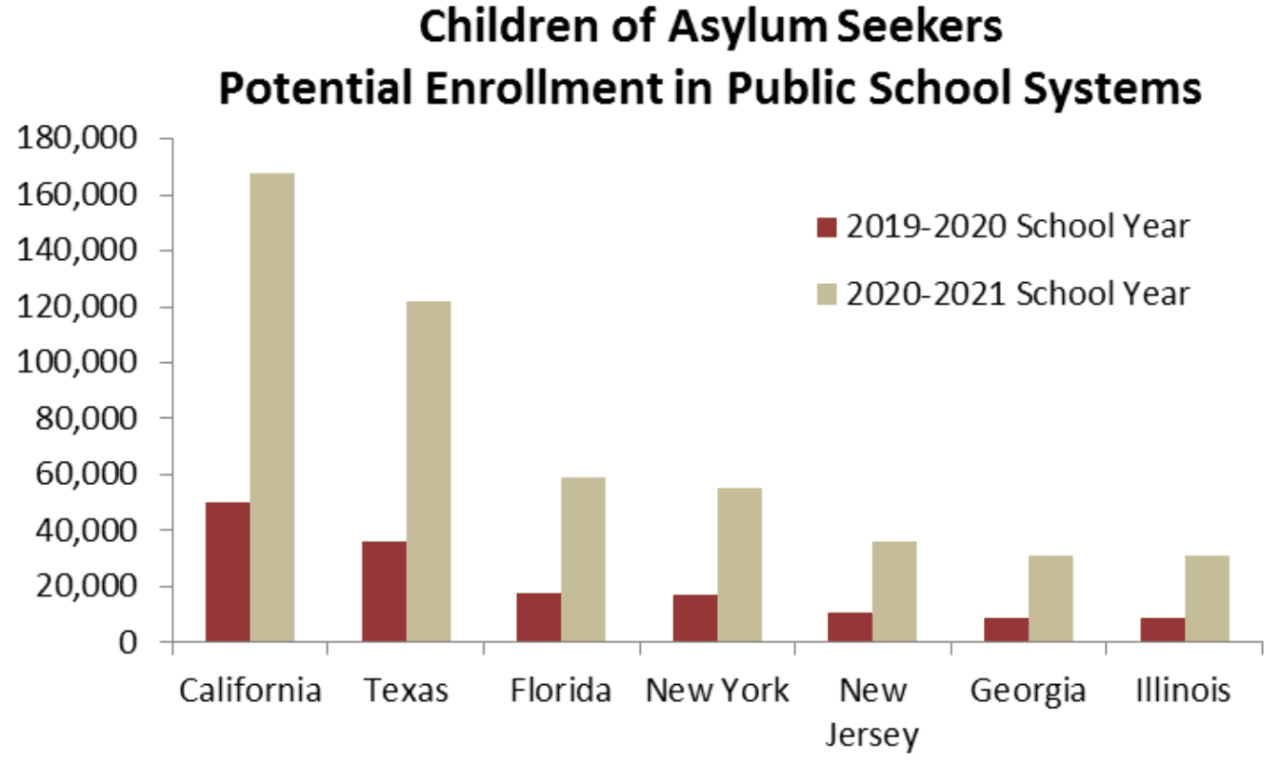 Skyrocketing illegal immigration at the U.S.-Mexico border has not only strained public resources but could choke 4 percent wage hikes that President Trump has delivered to America’s blue collar and working class.

Experts like former Secretary of State Kris Kobach have warned that if illegal immigration levels continue to rise over this year and throughout 2020, those wage hikes will be depleted by a saturated labor market with more cheap, foreign workers competing against Americans.

Every year, the U.S. admits more than 1.5 million illegal and legal immigrants, with more than 70 percent arriving through chain migration. In 2017, the foreign-born population reached a record high of 44.5 million. By 2023, the Center for Immigration Studies estimates that the legal and illegal immigrant population of the U.S. will make up nearly 15 percent of the entire U.S. population.