JOINT BASE MYER-HENDERSON HALL — They assembled at dawn in the muggy July heat before what resembled an array of prehistoric weapons, except they were modern-day fitness tools: sledgehammers, kettlebells, medicine balls, tires, water bags, punching bags — some as heavy as 100 pounds.

Their mission? To pick up the crushingly heavy loads using nothing but their bare hands and carry them for 500 meters, or a third of a mile. The first round would seem easy. But by the second or third round — and there were six — teeth were gritted, grunts were emitted, and sweat seeped through their shirts.

One of the rounds involved picking up a litter with someone laying on it holding onto a truck tire. And after those rounds were done, there were five more — 500 jump-rope repetitions, 100 battle-rope tsunami waves, 50 dragon boat rows, 50 rip trainer rows, and 50 gorilla bow pulls.

The workout session was devised and led by Army Command Sgt. Maj. John Troxell, the top senior enlisted officer in the U.S. military. He has dubbed the workout, only somewhat jokingly, “CHS Viking PT” — which stands for “carry heavy sh*t Viking physical training.” 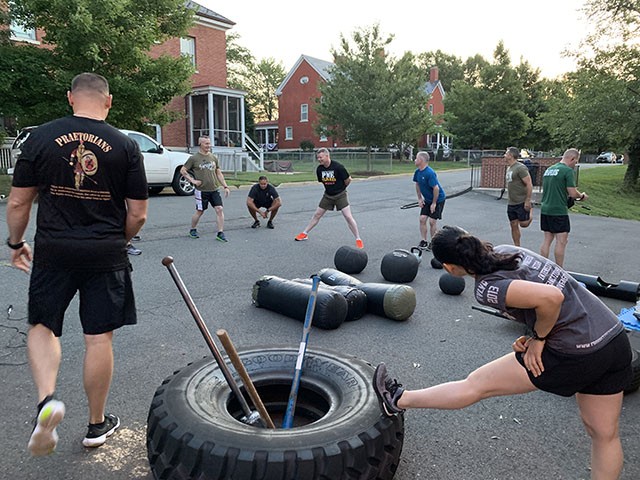 Senior enlisted military leaders from across the force and aides warm up for physical training. (Kristina Wong/Breitbart News)

For Troxell and a dozen senior enlisted military leaders from across the U.S. military who showed up that morning, it was more than a tough workout — they were validating their credentials, or in other words, showing the men and women they lead that they are putting in the hard work expected of them, too.

“People look at me or any senior leader. They see my rank here. They see that I’ve served in combat, I’ve got special skills, combat special skill badges, I have all this stuff. You read my bio, you know I’ve got a Master’s degree. But none of that means anything if I’m not willing to do the things that I expect every E-1 and above should do if I’m not willing to share in the hardships that they are,” Troxell said.

“So every day, we got to get out and show we can do what the troops do. Because the minute a senior leader focuses on what’s coming out of their mouth instead of their actions then they’re irrelevant to the force. So validating your credentials is everyday doing something physically, mentally, emotionally, technically, and tactically to make sure that you’re that kind of leader that is the example for those coming behind you,” Troxell continued. 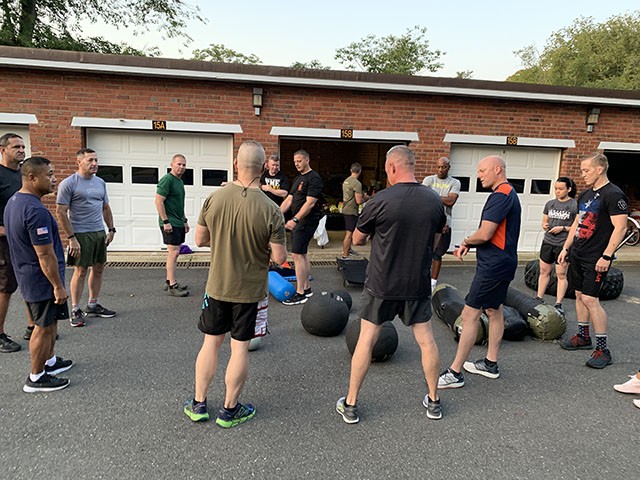 Troxell, 55, has made the fitness of the U.S. military one of his top priorities since becoming the senior enlisted adviser to the chairman of the Joint Chiefs of Staff in December 2015.

His focus is multi-faceted. Part of it is making sure troops are physically fit enough to fight in what Troxell calls “the worst day of their life.”

“If you look at what the worst day of a sailor’s life on a ship where there’s fire and flooding, and they have to wear firefighting equipment and they may have to help incapacitated sailors, and do damage control along with it — there has to be a requisite level of fitness to be able to get after that,” he said.

“Under the worst conditions my sailors, soldiers, airmen, Marines, and Coast Guardsmen will have to perform. So let me make them, train them, give them sets and reps at performing at that level which would be the worst day of their lives so that they’re prepared for that,” he added. “Chances are, if we are prepared for that, we will never have to execute.”

He said future war will be all-domain — involving ground, air, maritime, cyber, space — and more asymmetric than ever, and troops should train what he calls their “internal body armor” — the core, lower back, hips, quadriceps, and glutes.

He said high-level fitness experts have told him the true definition of functional fitness is the ability to move heavy loads over rough and uneven terrain for long distances. For that reason, he omits traditional bench presses, deadlifts, or squats, which are done from stable platforms.

“In combat, there are no stable platforms,” he said. “You’re climbing walls, your body’s off-balance, so I try to train for stability in my internal body armor.” 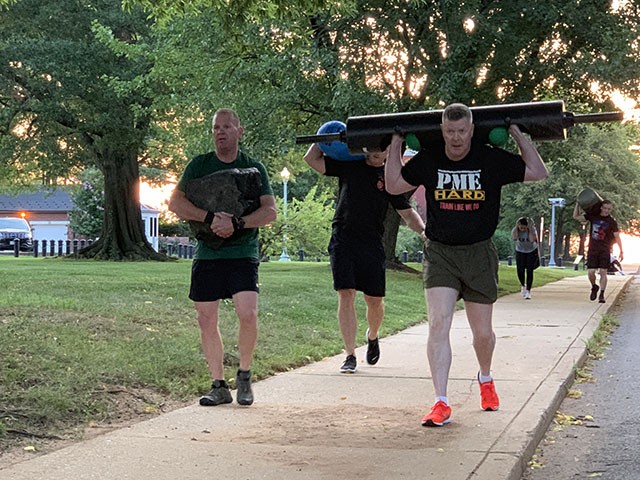 Another part of his focus on fitness is tackling a major problem in the U.S. military, where a certain percentage of the force is simply too fat to deploy and fight.

In 2017, 12 percent of the two-million-person force was non-deployable, with about 100,000 U.S. troops deemed clinically obese at a healthcare cost of about $5 billion a year.

Today, those figures are better. The percentage of those who are non-deployable is around seven to eight percent. Still, he said, even five percent of a two-million-person force is more than 100,000 troops who “cannot do their job.” “So, we still got a ways to go,” Troxell said.

“As I look at what we could be asked to do as a Department of Defense in terms of a North Korea scenario, or a Russia or China or Iran — you know, as Secretary Mattis used to say, we got to have all hands on deck. If we’re going to fight against North Korea, we need everybody. And there’s a certain population who are not deployed.”

He said in the ’90s, the non-deployable rate was only about two to three percent, but certain things changed during the post-9/11 wars.

“So we kind of went from this very lean kind of force to all of a sudden, we started becoming a lot more thicker, we were carrying a lot more body weight, and pretty soon, our bodies started to break down,” he said.

There was also the high pace of deployments, he said. “In the end, it’s kind of cost us. Now we got troops who can’t deploy and do their job, or we got troops that are extremely overweight, and it’s hurt us.”

Another focus of physical training is building what military leaders are calling “toughness.”

“More than fitness, it’s toughness. Combat is brutal and unforgiving. And so we have to prepare for that,” he said. “We have this kind of indoor generation now that is on machines and things like that.” 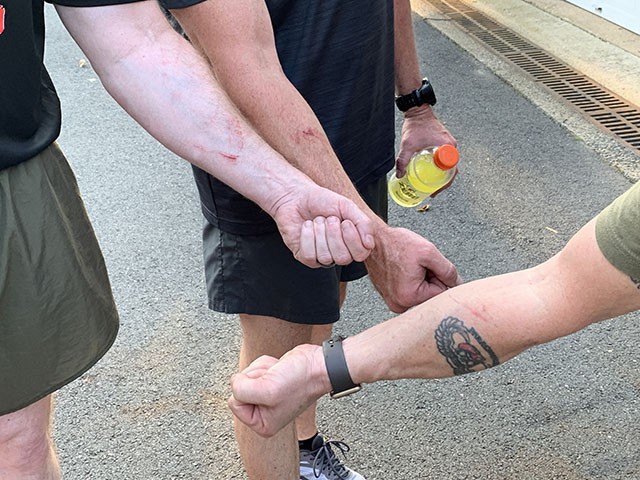 Troxell acknowledges it is not easy keeping in shape, and it has at times been a struggle for him, too.

He joined the U.S. Army in 1982, but it was not until his deployment in Germany in 1984 where he remembers being inspired by his first sergeant. “He was making us do PT everyday and he was holding standards.” He then joined the 82nd Airborne Division, where he joined “18,000 people that think like that.”

He said since 1986, he has always trained hard, but around 2006, he suddenly began gaining weight. In 2009, at 45, he was diagnosed with hypothyroidism and began taking medication. “I lost a little weight but my body, after 15 months in Iraq and wearing kit all the time, my body was sore all the time.”

His doctor told him, “Look, we got you on the medication, your thyroid’s under control. If you want your joints to feel better, you need to lose some weight.”

“I went from someone who focused on explosive and powerful and everything to all of a sudden, I became a cardio guy, and I went from 215 pounds all the way down to 178 — and I’ve felt so much better,” he said.

But, he said, it is a never-ending battle, even for him.

After he came into his current job, he started gaining weight again due to all the overseas travel and engagements with foreign officials. “I had a moment in Hawaii where I blew out my calf, and I stepped on this scale and I was back to 210 pounds. That was February of ’18,” he said.

“I started just watching what I ate and eating healthy, giving myself one day a week to cheat and eat whatever I wanted to, and still training like I’ve always done, and I got my weight back down to 178 pounds,” he said.

“At almost 56 years old I’m in pretty good shape and my body’s banged up from jumping out of airplanes and everything, but I’m still able to do the things that I expect the troops to do. And that’s what I think my role is, to show the troops what right looks like,” he said.

Troxell said he is not the only senior military leader upholding high physical fitness standards.

But Troxell is one of the few leaders at the top using social media to get out that message of fitness — which he says does have its detractors.

“There’s influencers out there who are what I call the ‘Sixty-Percenters.’ They don’t think leaders have to lead by example…And it doesn’t help when the old guard rises up and says, ‘Argh, I’d rather have a fat guy.’

“So the naysayers will always be there, and so we as leaders don’t listen to the naysayers. Keep being the example. Keep leading by example.” 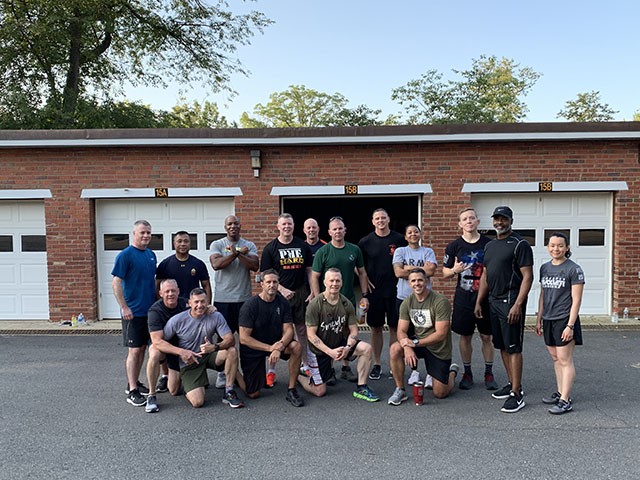