President Donald Trump’s citizenship chief had to talk down a media panic late Wednesday after reporters interpreted a minor regulatory correction as a big plan to deny citizenship to the overseas-born children of U.S. military service members.

“Folks who are going crazy rt now in the media, no changes have been made to citizenship – statement coming shortly,” said a tweet by Ken Cuccinelli, director the U.S. Citizenship and Immigration Services (USCIS). His tweet went out around 5:00 PM, a few hours after the reporter started the panic at 1.23 PM.

For those of you wondering what I’m talking about, … see next tweet…

…the highly technical policy manual used by career employees here as a reference was updated today to conform USCIS practices with the Dept. of State – that’s it. But some people are freaking out over nothing.

Here’s the statement I promised (1/3): The policy manual update today does not affect who is born a U.S. citizen, period. It only affects children who were born outside the US and were not US citizens. This does NOT impact birthright citizenship.

2/3) The policy update doesn’t deny citizenship to the children of US gov employees or members of the military born abroad. This policy aligns USCIS’ process with the Department of State’s procedures for these children – that’s it. Period.

But many pro-migration progressives and Democrats wanted to believe Trump’s deputies would try to deny citizenship to the American children of American soldiers, sailors, airman, and marines:

I was born in Europe while my father was stationed there during his Army service.

Denying citizenship to children of the people who serve around the world to keep us safe is a heartless betrayal of our military and government workers and of American values. This is unacceptable. https://t.co/pCMmaW9H9N

Yes and @realDonaldTrump and the GOP are “Pro military”
At least they don’t kneel for the anthem… blah, blah https://t.co/T4Vx4McIqF

Snopes.com credited the scare to Tal Kopan, the D.C. correspondent for the San Francisco Chronicle:

On Aug. 28, 2019, a tweet from the San Francisco Chonicle’s Tal Kopan reported that newly issued guidance from the United States Citizenship and Immigration Services (USCIS) meant that children born to U.S. service members stationed outside the United States would not automatically be considered U.S. citizens:

Today USCIS issued guidance that DHS "no longer considers children of U.S. government employees and U.S. armed forces members residing outside the United States as 'residing in the United States' for purposes of acquiring citizenship” —https://t.co/IRNR21Qm4P 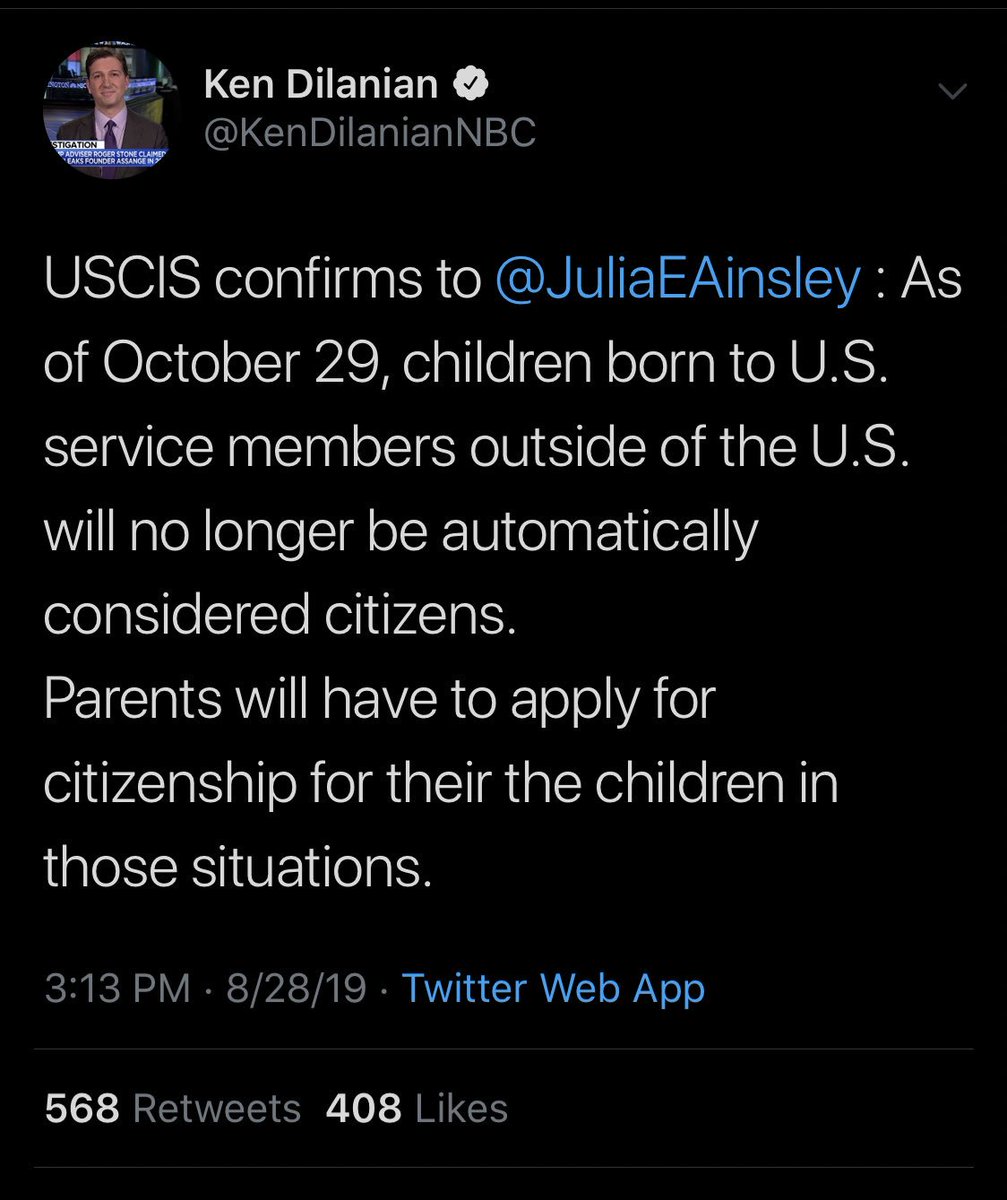 TheHill.com also broadcast the claim with a story that went viral:

The Trump administration said Wednesday that the children of some U.S. military members and government employees working overseas will no longer automatically be considered United States citizens.

The tweet suggested the policy would apply to the children of U.S. citizens who are service members:

JUST IN: Trump admin says children of US service members overseas will not get automatic citizenship https://t.co/EXYLFI9ZMg pic.twitter.com/72cFCE1ItJ

If this new policy had been in effect, I and many kids I went to school with as army brats would not have qualified as US Citizens. My mom served 8 years & my dad served 31 years in the US Army. He went to war 5 times for his country. These policies are a slap in the face.
FUBAR! 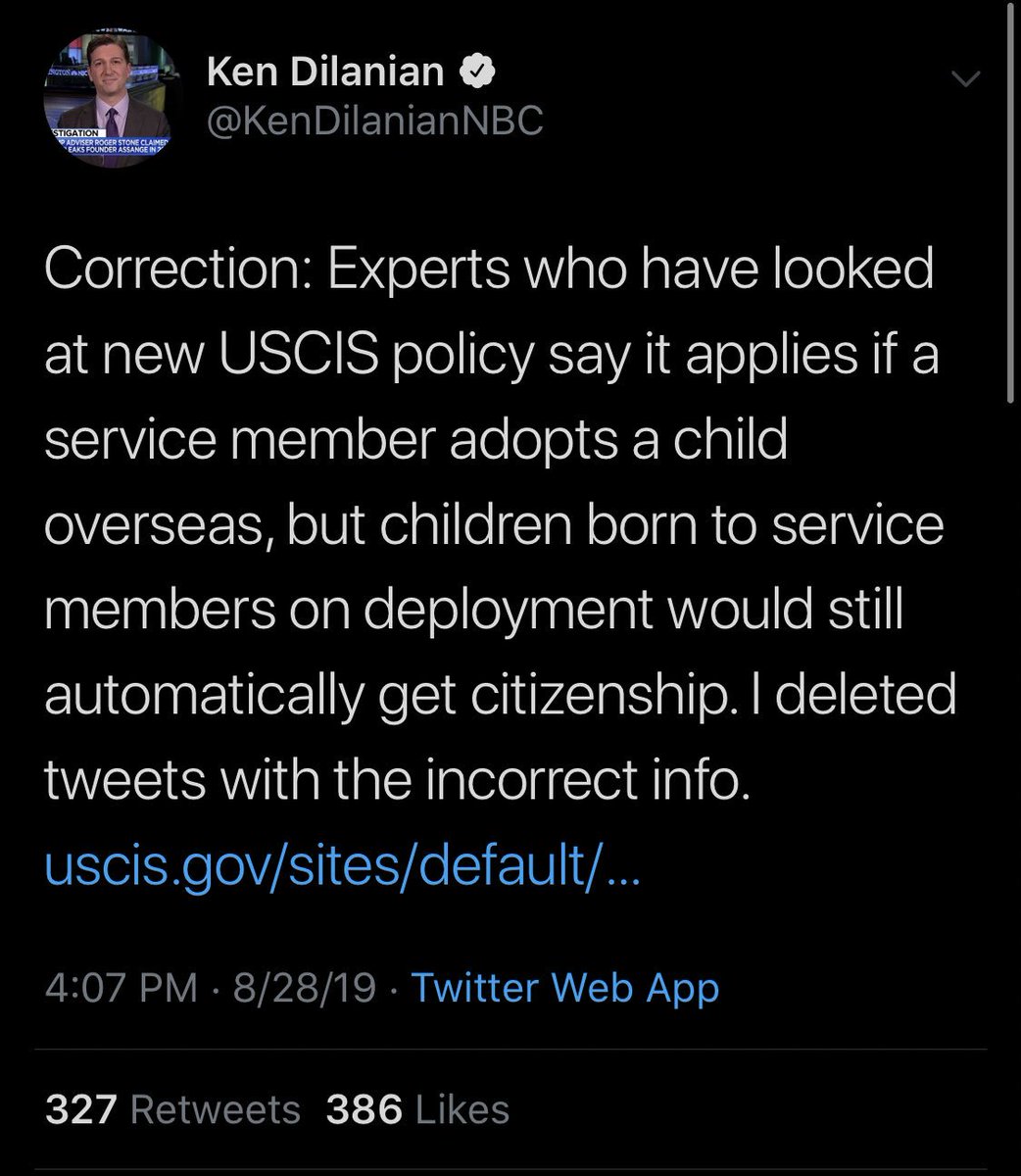 The 7:00 PM version of the Hill.com’s story included this paragraph:

The rollout of the new rule quickly sparked widespread confusion, leading some to believe that many more individuals would be affected than in actuality.

“This kind of memo is the sort of thing that you don’t put out to the general public without a very bold-faced letter executive summary saying ‘Here’s what this does not do,’” said Bradley Moss, a lawyer with expertise in national security.

The Washington Post ran with the scare story, but eventually added the caveats:

NEW If you are a citizen who lived 5+ yrs in the US, this complicated new policy doesn't apply to you. But it applies to some.