The following an exclusive excerpt from Lee Smith’s new book, The Permanent Coup: How Enemies Foreign and Domestic Targeted the American President, available on August 18, 2020.

Barack Obama had cultivated Black Lives Matter support during his presidency. Five police officers were killed in Dallas during a July 2016 BLM protest against police violence. They had been killed by a black sniper who told the police he was targeting white officers.

The president spoke at their funeral. “We have all seen this bigotry in our lives at some point,” said Obama. “None of us is entirely innocent. No institution is entirely immune. And that includes our police departments. We know this.” The day after the funeral, Obama hosted BLM officials at the White House.

The organization that helped raze and loot American cities in the spring and summer of 2020 was a frontline militia as well as a fund-raising mechanism. The “Donate” tab on the BLM website links to ActBlue, a Democratic Party financial instrument that pushed more than $1.5 billion in small donations into the 2018 midterms.

Democratic Party money was also backing an information warfare campaign targeting Trump and his base. In May the press reported that retired general Stanley McChrystal was advising Defeat Disinfo, a political action committee using technology developed to counter ISIS propaganda. Pentagon-funded research had been retooled to sabotage the president’s re-election campaign. 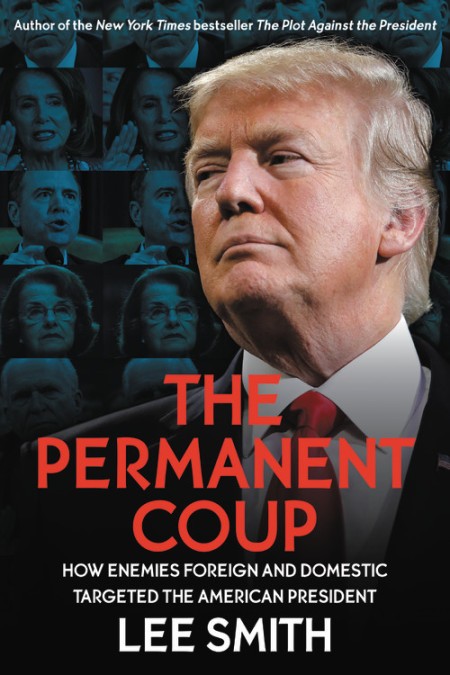 McChrystal had been critical of Trump in the past. After defense secretary Mattis’s 2018 resignation, he praised the retired Marine general and slammed Trump’s plan to withdraw forces from Syria and Afghanistan.

“If you pull American influence out, you’re likely to have greater instability, and of course it’ll be much more difficult for the United States to try to push events in any direction,” said McChrystal.

“There is an argument that says we just pull up our stuff, go home, let the region run itself. That has not done well for the last fifty or sixty years.”

He’d led elite special forces units before being named as commander of US troops in Afghanistan in 2009. He later acknowledged that he didn’t have a plan for Afghanistan. “I wish I did,” he said he told Secretary of State Mike Pompeo.

“If we pull out and people like al-Qaeda go back, it’s unacceptable for any political administration in the US. It would just be disastrous, and it would be a pain for us,” said McChrystal. “If we put more troops in there and we fight forever, that’s not a good outcome, either. I’m not sure what the right answer. My best suggestion is to keep a limited number of forces there and just kind of muddle along and see what we can do.”

He was relieved of duty in 2010 after the publication of a magazine article in which his staff criticized Vice President Biden. In 2011, McChrystal teamed up with First Lady Michelle Obama in an initiative assisting military families.

His new project was sponsored by Democratic Party operatives and former Obama officials. A former DNC finance director was helping raise money. Defeat Disinfo, according to press reports, was an extension of Main Street One, a New York–based intelligence firm funded in part by Higher Ground Labs, an incubator for Democratic Party initiatives. It was run by a former Obama fund-raiser and a strategist who worked on both Obama presidential campaigns. Several former Obama officials were on the board.

McChrystal said his aim was to ensure “the accuracy of information leading up to the election.” The artificial intelligence and network analysis designed to counter ISIS was recast to disrupt the Trump campaign. Defeat Disinfo relied on a network of more than 3.4 million influencers across the country, some of whom, according to press reports, were paid to take sides against the president.

For nearly a week at the end of May, protestors gathered in Lafayette Park in front of the White House and clashed with police. It was a US version of a color revolution, targeting the American president. The night of May 31, they set fire to St. John’s Episcopal Church across the street from 1600 Pennsylvania Avenue, known as the Church of the Presidents, where US commanders in chief have prayed for more than two hundred years.

It had been a tough week; the country had been through a lot. Trump wanted to show resolve. In the late afternoon of June 1, he broke off from a press conference and led part of his Cabinet through the park, where protestors had gathered. Park Police scattered the crowds that the previous night had sown chaos in the surrounding neighborhood.

As the Trump team walked out, to their left was the Hay-Adams hotel, one of the city’s most beautiful and historic landmarks, home once to John Hay, Lincoln’s personal secretary and two-time secretary of state, and the historian Henry Adams, a descendant of Presidents John Adams and John Quincy Adams. The hotel’s scaffolding had been set on fire by protestors the night before but was soon extinguished.

There was still evidence of the fire that had burned in the basement of St. John’s Sunday night. Trump climbed the front steps. With him were, among others, Attorney General Barr, defense secretary Mark Esper, and chairman of the Joint Chiefs of Staff General Mark Milley, chief of staff Mark Meadows, and national security advisor Robert O’Brien. Trump held up a Bible and spoke a few words.

“We have a great country. That’s my thought. We have the best country in the world,” said Trump. “We will make it even greater. And it won’t take long. It’s not going to take long. You see what’s going on, it’s coming back, it’s coming back strong. It’ll be greater than ever before.”

Two days later, Trump’s former defense secretary James Mattis fired a shot across his bow. He released a statement that appeared to zero in on the president. “The Nazi slogan for destroying us . . . was ‘Divide and Conquer.’ Our American answer is ‘In Union there is Strength,” wrote Mattis. Like the Antifa anarchists laying waste to US cities, the former Trump Cabinet member was calling the president a Nazi.

He described the church walk as a “bizarre photo op for the elected commander-in-chief” and called out “military leadership standing alongside.” That was the purpose of Mattis’s statement. He appeared to be chastising Trump, but he was in fact warning Trump’s two top defense officials, Esper and Milley.

“We must reject any thinking of our cities as a ‘battlespace,’” wrote Mattis, referencing a phrase that Esper had used in the preceding days when the administration was discussing the possibility of sending active-duty forces to US cities ravaged by the violence.

“At home, we should use our military only when requested to do so, on very rare occasions, by state governors,” wrote Mattis. He was referring to the 1992 Los Angeles riots during which Governor Pete Wilson called in ten thousand Marines to quell the violence. Mattis understood the present problem well enough—either by intention or through incompetence, state and local authorities throughout the country had prevented police forces from protecting American lives and property. If they wouldn’t do it, what choice did the president have but to intervene? Mattis sided with chaos.

Esper was the first to fall out. The day that Mattis’s threat was published, he delivered a statement in the Pentagon press room. Esper said that he now disagreed with Trump, and there was no reason yet to send in active-duty troops.

Milley folded the week after. He apologized for joining the president in a show of resolve with a walk across the park. “My presence in that moment and in that environment created a perception of the military involved in domestic politics. As a commissioned uniformed officer, it was a mistake that I have learned from, and I sincerely hope we all can learn from it.”

Mattis had written that Trump was dividing America. In fact, it was he who had purposefully sown disunity. By warning civilian and military Pentagon officials to distance themselves openly from the president they served, Mattis had helped destabilize the US government.

Obama had seized the advantage. “We’re in a political season, but our country is also at an inflection point,” his top aide, Valerie Jarrett, said in June. “President Obama is not going to shy away from that dialogue simply because he’s not in office anymore.”

In fact, the Party of Obama had been waging a proxy war against Trump and his supporters for more than three years. Their first instrument was the Russiagate conspiracy theory, which hatched a fraudulent impeachment process staged by the same political operatives, intelligence officials, and media personalities who pushed “collusion” into the public sphere. They even weaponized real crises to undermine the US government, like the coronavirus and the ensuing three-month-long lockdown that was portrayed as a matter of life and death, only to be randomly lifted to combat racism, after leaving tens of million Americans jobless. The successive failures of their campaign to destroy Trump and undo the 2016 election only made them angrier and more willing to take desperate measures.

The point of the protests and the coup of which they were a central component was plain: If you want peace and stability, restore the Party of Obama and let him complete his work, the transformation of America. Choose Trump and you choose war.

Lee Smith is a veteran journalist and bestselling author. His latest book, The Permanent Coup: How Enemies Foreign and Domestic Targeted the American President, is available on August 18, 2020.