“We made history together four years ago and tomorrow we’re going to make history once again,” Trump said after taking the stage at midnight.

“It’s not easy, but there’s nothing I’ve ever enjoyed more in my life because we are making so much progress,” Trump said.

The president recalled that Grand Rapids, Michigan was the site of his last rally of the 2016 campaign.

“There’s a lot of spirit here. It’s funny, I kept saying we have to finish off here,” Trump said. “We have to do it. It’s just that we can be a little bit superstitious, right?”

“I’m so happy. This was the greatest decision that I’ve ever made,” Trump said. “We have done so much good together. We’ve done it together. We couldn’t have done it without you.”

“Mike’s been great from day one and I appreciate it,” he said.

The president also thanked members of his family for working throughout the 2020 campaign.

“Words cannot express how proud you make me every single day, no matter what happens tomorrow,” he said.

To all of our supporters: thank you from the bottom of my heart. You have been there from the beginning, and I will never let you down. Your hopes are my hopes, your dreams are my dreams, and your future is what I am fighting for every single day! https://t.co/gsFSghkmdM pic.twitter.com/fLek4keQ1t

Trump acknowledged that the “fake news” media repeatedly described him as a “nasty person” but he defended his style as necessary against the establishment political forces warring against him.

“If we didn’t have social media, I’d have no voice, We wouldn’t be here,” he said.

Trump acknowledged the organic rallies and parades of his supporters as a sign that the America First movement was stronger than ever.

“They say you cannot win without Big Tech. We’re going to find out tomorrow,” he said.

The president again dismissed his opponent former Vice President Joe Biden as “sleepy” and not ready to lead the country.

“He was a glad handler, not a smart guy, not a nice guy either,” he said, recalling his 47-year career in Washington, DC.

Trump played a highlight video for the crowd of Biden’s most awkward moments on the campaign trail, including a series of brain freezes and bizarre comments.  It also featured a comparison of Biden’s campaign crowds and Trump’s massive rallies.

“Look you can’t let this happen to our country, okay? Trump said referring to Biden. “This was a total fluke … what a disaster, I can’t believe this is happening.” 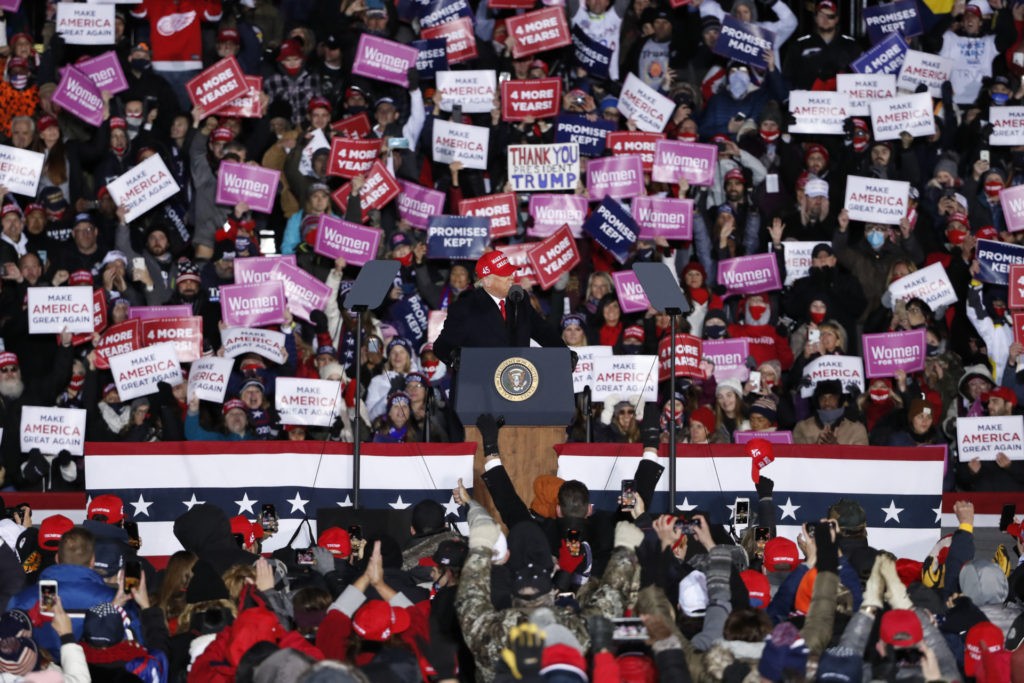 He surprised the crowd by inviting rapper Lil’ Pump to the stage.

“I come here to say Mr. President I appreciate everything you’ve done for our country, you brought the troops home, and you’re doing the right thing,” the rapper said. “MAGA 202020 don’t forget that! And do not vote for Sleepy Joe AT ALL!”

“We’re doing great in Pennsylvania, by the way, I just got the word,” Trump said.

“You’re going to have a very exciting evening, or day tomorrow, but evening in particular,” he continued.

Trump said that the enormous crowd in Michigan gave him hope that he would win the state again.

“When you draw crowds lie this, this is not the crowd that is going to lose the state of Michigan! … Look at this crowd. You cannot see the end of it!”

The president left the stage at 1:13 a.m. to return to the White House where he will watch the election returns.