Colleen Oefelein, a literary agent located in Alaska, was fired this week, apparently only for having opened a social media account on Parler.

I made a good faith effort to locate anything offensive Oefelein might have tweeted, something fire-able, and could not find anything. I also reached out twice to her former employer yesterday with a detailed message asking if she was fired only for using Parler or if there was a specific tweet involved.

As everyone now knows, unlike Twitter, which engages in a terrifying form of left-wing corporate censorship and regular purges of right-leaning users (including President Trump), Parler does not censor its users. In fact, Parler is what Twitter originally advertised itself as: a free speech platform dedicated to the American ideal of open and honest debate.

Unfortunately for Parler, it made the terrible decision of using Amazon, a left-wing corporation opposed to free speech, to host its servers. Amazon booted them and now Parler is barely functional.

Nevertheless, from what I can piece together, here’s how the whole thing with Oefelein went down…

“I’m now posting on Parler. It’s a great platform with no censorship! Giving away a few critiques there next week. Come find me.” She then added some hashatgs: #WritingCommunity #Writer #Askagent.

I’m now also posting on Parler. It’s a great platform with no censorship!
Giving away a few critiques there next week. Come find me @ColleenOefelein ❤️❤️❤️#WritingCommunity #Writer #askagent

Then, on January 25, in a tweet that now appears to have been deleted, the account @YAWhispers asked Oefelein’s employer — the New York-based Jennifer De Chiara Literary Agency — the following: “Does @JDLitAgency know or care that one of their agents frequents alt-right social media like Parler and Gab?”

By 10:09 a.m. that same day, Jennifer De Chiara herself (who has since locked her Twitter account) responded with, “Thank you for bringing this to my attention. I have taken swift action, and as of this morning, January 25th, Colleen Oefelein is not longer an agent at this agency.” 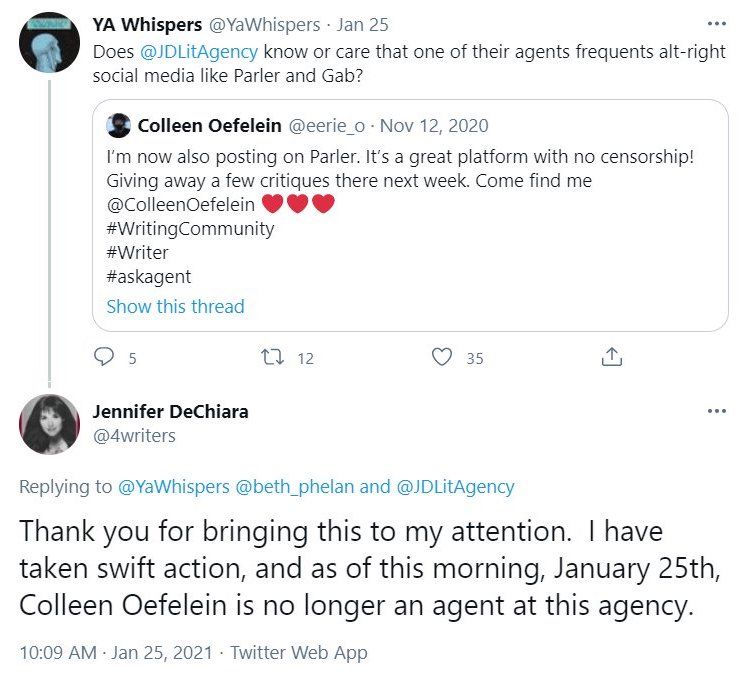 Later that same day, Oefelein confirmed her firing. “Well thanks Twitter and @JDLitAgency. I just got fired because I’m a Christian and conservative.”

Well thanks Twitter and @JDLitAgency. I just got fired because I’m a Christian and a conservative.

From the looks of it, and I will happily update this piece with any new information, Oefelein was fired for nothing more than opening a social media account on a Twitter alternative. That’s it. There’s no evidence (I can find) of a single thing she’s ever done — not on Twitter, Parler, or anywhere — that is in any way offensive to anyone (I’ve also reached out to Oefelein for comment).

What’s more, the story has been picked up locally and by far-left outlets like Newsweek, and again, Oefelein’s single offense appears to be only one: opening an account on Parler.