The tweet Tawni Kind “liked” recently included a graphic that said, “Antifa stands for anti-fascism.” The tweet has also claimed that veterans who had fought in World War II were a part of Antifa. During World War II, over 400,000 Americans lost their lives, and over 670,000 were wounded in battle.

The tweet Tawni Kind liked also makes clear that “anyone can be Antifa” and that “everyone should be Antifa” since Antifa is not an organization that you need to have a membership card for. The tweet was in response to one of the representative’s Republican colleagues, Mace, who tweeted shortly before that her home was vandalized with “spray-painted ANTIFA graffiti.” 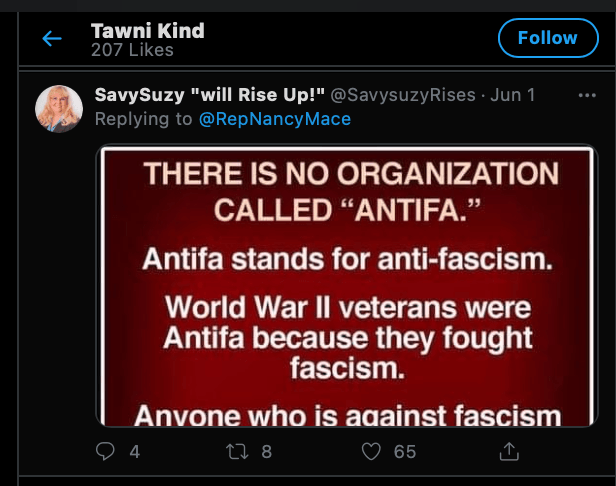 Tawni Kind has since “unliked” the tweet after Breitbart News sent an inquiry to the congressman’s office.

Mace’s original tweet said over the memorial day weekend, early in the day, “my home was vandalized w/ spray-painted ANTIFA graffiti. This kind of illegal act of intimidation shows the destructive division in our country and just how dangerous it can be. We can and must do better.” Mace also released a statement saying she and her kids are thankfully fine while noting, “There is a significant difference between nonviolent protests, and criminal acts of intimidation and vandalism. We should all be able to feel safe in our own homes, regardless of our political beliefs.”

In light of Tawni Kind supporting a tweet about how everyone should join Antifa, Mace told Breitbart News exclusively, “I appreciate Mrs. Kind’s perspective, and I’d be happy to debate the criminality of Antifa at any time.”

“Unfortunately, a lack of membership cards didn’t stop criminals from using Antifa language, hatred, and radicalism to harass me, traumatize my kids, and intimidate my neighbors,” Mace continued to say.

The congresswoman then added, “Antifa is a group of criminals who engage in criminal violence and destruction under the guise of political valor. Some of those criminals targeted my family and this type of rhetoric, endorsed by Mrs. Kind, is disgraceful.”

Early on Memorial Day, my home was vandalized w/ spray-painted ANTIFA graffiti. This kind of illegal act of intimidation shows the destructive division in our country and just how dangerous it can be.

Breitbart News reached out to Sarah Abel, the communications director for Ron Kind, to request a comment to see if the congressman would denounce Antifa or the attacks on Mace’s house, but Abel did not respond.

Breitbart News reported the special interests and corporations funded trips he went on with Tawni had totaled more than $110,000. The report noted the 14 trips taken by Kind, which span over the course of two decades.

He has taken trips everywhere from Tel Aviv to Geneva to Rome to Munich to Fort Lauderdale to New Orleans to Houston to Seattle and more, funded by various different special interest groups and corporations.

The documents, while filed with the House Ethics Committee as required by congressional ethics regulations, have not been publicly reported until now. Kind’s office declined to make the congressman available for an interview to explain his high-class globetrotting on special interest groups’ dimes, and would not provide a comment in response to these revelations.

This comes as the Republican campaign arm, the National Republican Congressional Committee (NRCC), unleashed billboards across Kind’s district to highlight the seedy massage parlor scandal looming over his career, from which he’s taken tens-of-thousands of dollars in income. The seedy massage parlor has been advertising its spa on websites notorious for prostitution advertisements. Some of these websites appear to be RubMaps, AssortList, and BodyRubsMap.

However, Breitbart News’s Washington Political Editor Matthew Boyle exclusively uncovered that the building in La Crosse, which is owned by Kind and where he rents to the current seedy massage parlor, has been known to have a history of being a “house of prostitution.”

Resurfaced newspaper reports from the 1970s and 1980s indicated that there is proof that the location was previously busted by law enforcement for running a “house of prostitution.” But, with all of the information resurfacing about the massage parlors, Kind said the articles are “baseless smear rooted in racism and insinuations.” Kind had added, “Tawni and I have never received any complaint from the community or police about this small business.”

Update: Since the previous update, when Tawni Kind made her Twitter profile Private, Breitbart News found Tawni has now made the Twitter account publicly accessible, but has since “unliked” six posts, making her “like” count 201, where it previously was 207 at the time of the initial reporting.