A survey from the liberal Center for American Progress, founded by John Podesta, finds that voters’ top foreign policy priorities are protecting jobs for Americans, 47 percent, and reducing illegal immigration to the U.S., 42 percent.

The foreign policy issues are the highest-ranked among swing voters as well as Republicans, while Democrats, by a plurality of 44 percent, say combatting global warming is their top priority. 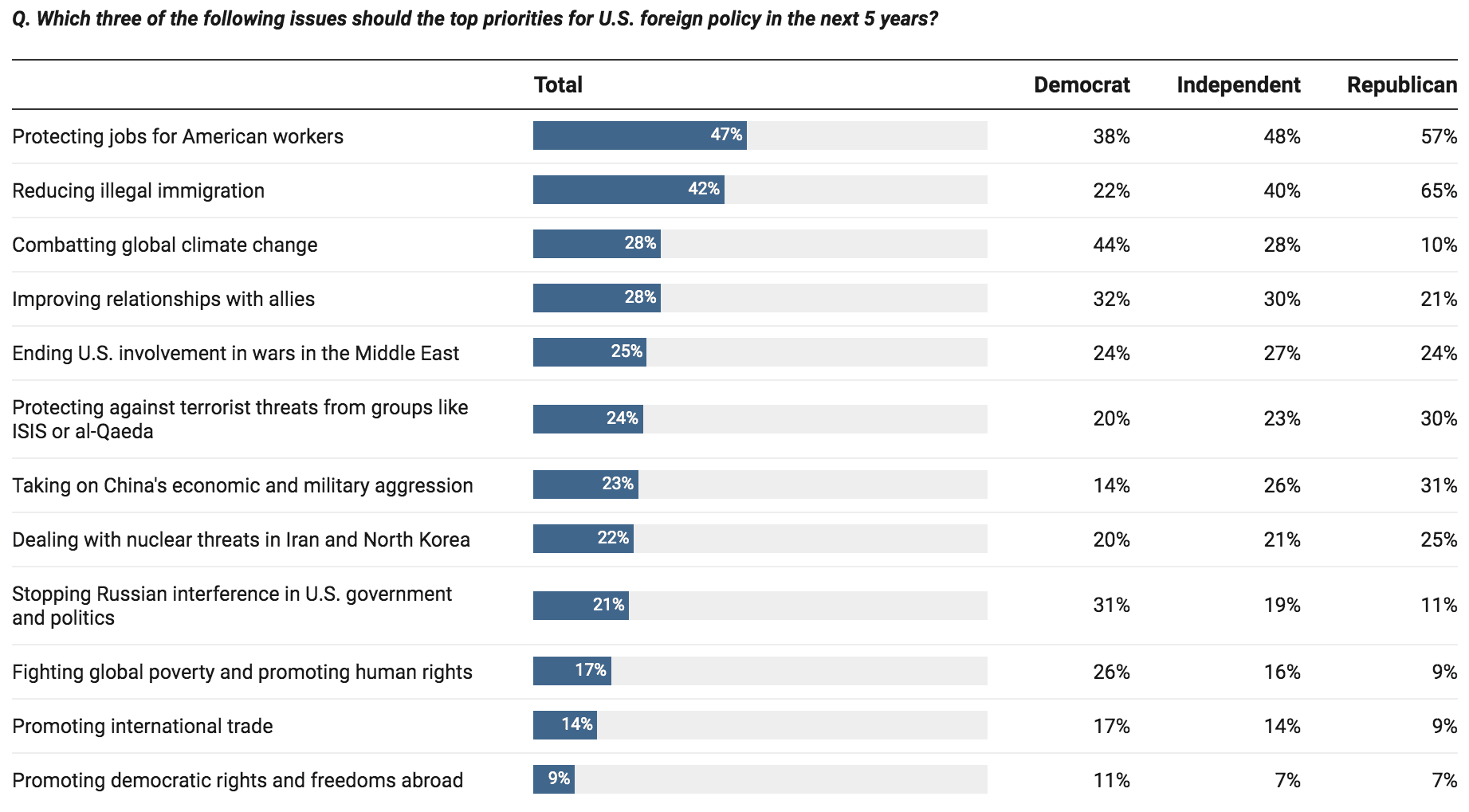 (Chart via Center for American Progress)

When asked what the top priorities should be for the president and Congress over the next five years, voters ranked controlling the Chinese coronavirus, boosting jobs and wages for Americans, and cutting overall immigration to the U.S. as their top three issues.

Republicans rank cutting overall immigration to the U.S. as their top priority for a president and Congress with 6-in-10 GOP voters saying so. 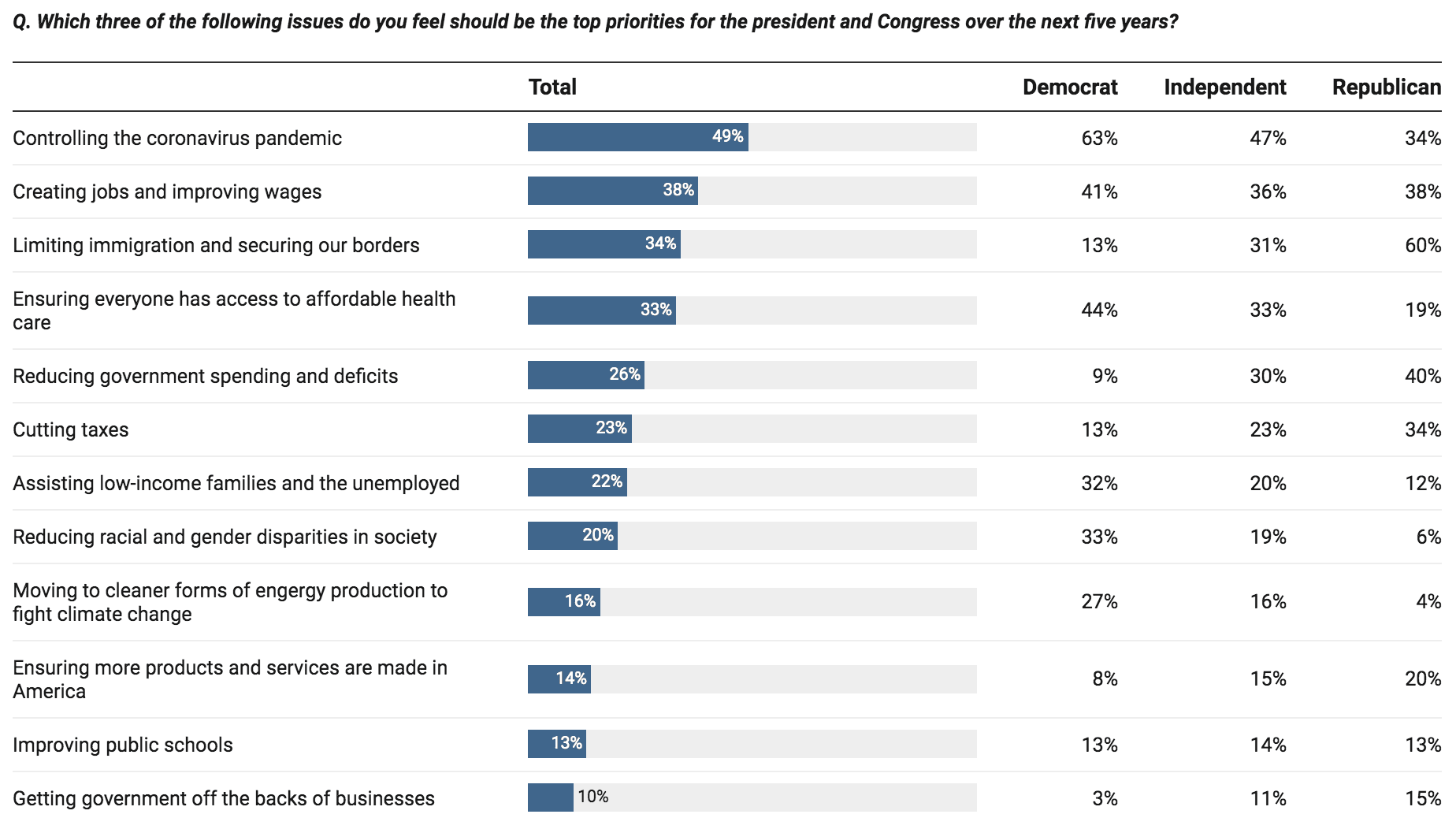 (Chart via Center for American Progress)

The survey comes as the Republican Study Committee (RSC), chaired by Rep. Jim Banks (R-IN), released its Fiscal Year 2022 budget — an insight into the priorities of conservative lawmakers.

Current legal immigration levels, where about 1.2 million legal immigrants acquire green cards annually, are opposed by the vast majority of Republicans and conservatives — a grassroots rebuke of the U.S. Chamber of Commerce’s agenda for mass immigration.

The latest Rasmussen Reports survey shows that 54 percent of Republicans and 52 percent of conservatives want legal immigration levels cut in at least half, down to fewer than 500,000 annual admissions.

Such a policy is executed, the budget states, by reducing legal immigration levels, ending the nation’s birthright citizenship policy, barring employers from hiring illegal aliens over Americans, and preventing welfare-dependent legal immigrants from permanently resettling in the U.S., among other policies.

Though while the RSC budget matches its constituents’ priorities on immigration, it veers off in its promotion of free trade over U.S. job protections and tariffs on foreign imports.

The budget, for example, denounces the use of tariffs on foreign imports to protecting domestic American manufacturing and jobs. Instead, the budget embraces a broad “promoting free trade” agenda.

“Simply put, free trade is how we put America first,” the RSC budget reads, citing the Chamber of Commerce. As free traders sought to pass when former President Donald Trump was in office, the RSC budget endorses legislation to prevent a president from increasing tariffs on foreign imports without first securing congressional approval.

The provisions are hugely out-of-line with the majority of Republicans. The latest Gallup survey found that Republicans’ opinions of foreign trade as a net benefit to the U.S. economy have dropped to the lowest point since the firm began tracking the opinions of voters on the issue in 1991.

Much of the change in Republicans’ opinions on free trade are credited to the Washington, D.C. beltway’s decades-long consensus on the issue which claims that trade deficits have no impact on U.S. jobs or wages.

Many Republican voters, though, have seen firsthand the devastating impact.

In March, 81 Americans employed at the General Electric Lighting-Savant in Bucyrus, Ohio were told they would be laid off as the company offshores production to China. The closure of the plant, which has been in the area since 1942, would mean a $100,000 tax revenue loss with a total of 200 Americans laid off in the small town of fewer than 12,000 residents.