The State of California is suffering through a summer of man-made disasters, including wildfires and a sewage discharge, as the Delta variant of the coronavirus sweeps through densely-populated regions.

In the northern part of the state, wildfires are burning across enormous areas, with the Dixie Fire nearing 200,000 acres. The San Jose Mercury News reported Saturday:

About 11 days after it broke out near Paradise in Butte County, the fire has rapidly spread northeast and by midday Saturday encompassed 181,289 acres, up nearly 14,000 acres since the night before. Although it has torched largely remote, unpopulated areas, its spread as of Saturday threatened thousands of businesses and homes largely along Lake Almanor’s west shore, the High Lakes area and Bucks Lake, according to the California Department of Forestry and Fire Protection.

The fire has surpassed California’s previous leader, the Beckwourth Complex to the east, to become the biggest wildfire so far this year. On Friday, Gov. Gavin Newsom Gov. proclaimed a state of emergency in Alpine, Butte, Lassen and Plumas counties due to the Dixie Fire and two others burning in the region.

The fire is spreading thanks to unusually dry conditions, the result of several years of drought, and recent warm weather. Some on the left blame climate change, though scientists do not yet agree that it is responsible, though it could create the conditions for more fires in the future. What is possibly responsible in an immediate sense appears to be faulty electrical lines — again — according to the Los Angeles Times:

The fire, which has grown into the state’s largest of the season so far, was sparked July 13 in Feather River Canyon. Pacific Gas & Electric was alerted to an outage at Cresta Dam and dispatched a troubleshooter, who wasn’t able to reach the location of the suspected problem until more than nine and a half hours later, according to a report the utility filed with the California Public Utilities Commission on July 18. By then, the worker found a tree had fallen into a conductor and a fire had started at its base.

The fire grew to 15 acres later in the evening; by the following morning, it had grown to 1,200 acres.

In its filing, PG&E blamed challenging terrain and bridge repairs for the delay in the worker reaching the site, but prosecutors investigating the incident have said he didn’t arrive in the area until up to four hours after the outage was detected because the utility did not consider it to be a high-priority issue, according to a report from KQED.

A PG&E representative declined to discuss the allegations but said the information in the report to the CPUC was preliminary, and the utility is cooperating with the investigation into the fire.

Several other wildfires, some ignited by natural causes like lightning, continue to burn.

Moreover, Gov. Gavin Newsom failed to keep his $1 billion promise to clear vegetation from forests that could fuel fires. Capital Public Radio reported last month that Newsom not only failed to keep his word, but also misled the public:

An investigation from CapRadio and NPR’s California Newsroom found the governor has misrepresented his accomplishments and even disinvested in wildfire prevention. The investigation found Newsom overstated, by an astounding 690%, the number of acres treated with fuel breaks and prescribed burns in the very forestry projects he said needed to be prioritized to protect the state’s most vulnerable communities. Newsom has claimed that 35 “priority projects” carried out as a result of his executive order resulted in fire prevention work on 90,000 acres. But the state’s own data show the actual number is 11,399.

Overall, California’s response has faltered under Newsom. After an initial jump during his first year in office, data obtained by CapRadio and NPR’s California Newsroom show Cal Fire’s fuel reduction output dropped by half in 2020, to levels below Gov. Jerry Brown’s final year in office. At the same time, Newsom slashed roughly $150 million from Cal Fire’s wildfire prevention budget.

Meanwhile, in Southern California, beachgoers and local residents are furious after a major sewage treatment facility in Los Angeles discharged 17 million gallons of untreated sewage into the Santa Monica Bay, without adequate warning. 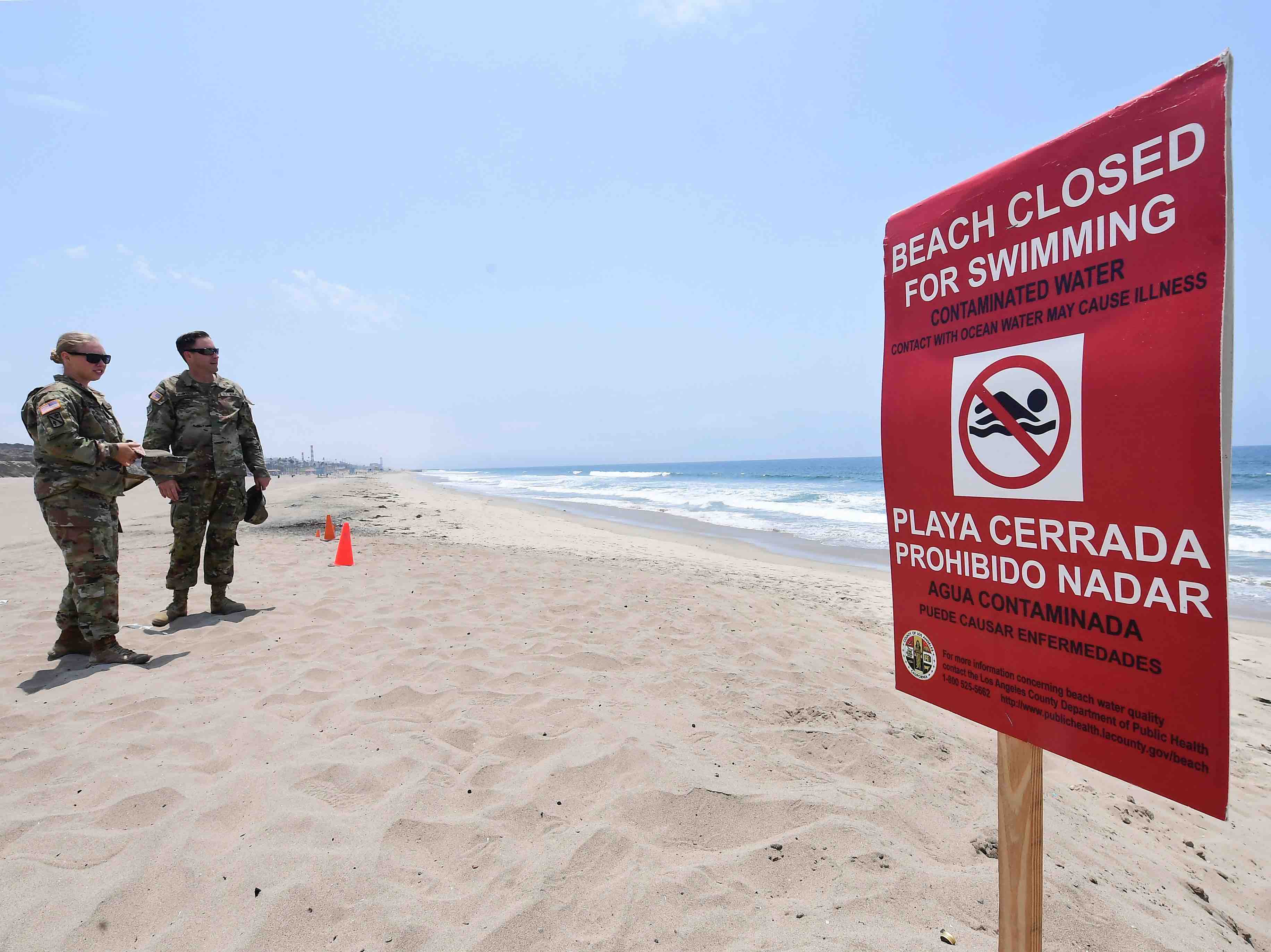 US Army National Guard members look at the water at Dockweiler State Beach in Playa del Rey, in Los Angeles County, California, on July 13, 2021, next to a sign indicating that the beach is closed to swimming after a sewage spill. – 17 million gallons of sewage were discharged from the Hyperion Water Reclamation Plant one mile offshore, instead of the usual five miles, after the plant was “inundated with overwhelming quantities of debris”, according to a statement released by LA Sanitation and Environment on July 12, 2021. (Photo by FREDERIC J. BROWN / AFP) (Photo by FREDERIC J. BROWN/AFP via Getty Images)

The Times reports that “debris, including wood chips, concrete, paper and grease,” had clogged the plant’s filters, leading to a discharge. Local lifeguards told Breitbart News that they had not been informed until several hours after the event.

The Times adds: “Because of the damage, a fuel that is a byproduct of the wastewater treatment is being made in smaller amounts and must be destroyed, which can cause odors, noise, smoke and flames.” Some residents are being relocated on a voluntary and temporary basis.

Finally, coronavirus continues to surge in urban counties. The Delta variant is now the state’s dominant coronavirus strain, accounting for 82% of cases. Ten people were reported to have died of the coronavirus in Los Angeles County.

Joel B. Pollak is Senior Editor-at-Large at Breitbart News and the host of Breitbart News Sunday on Sirius XM Patriot on Sunday evenings from 7 p.m. to 10 p.m. ET (4 p.m. to 7 p.m. PT). He is the author of the recent e-book, How to Write: $50,000 of Lessons for $5. His recent book, RED NOVEMBER, tells the story of the 2020 Democratic presidential primary from a conservative perspective. He is a winner of the 2018 Robert Novak Journalism Alumni Fellowship. Follow him on Twitter at @joelpollak.