As it turns out, shuttering businesses, keeping children out of schools, and devastating economies with stringent lockdown measures is not the answer to keeping the Chinese coronavirus pandemic under control, according to a new study from the Beacon Center of Tennessee.

The study, which Breitbart News obtained exclusively before its release, compared four states: Tennessee and Georgia, which had more relaxed leadership during the height of the pandemic, and Michigan and Kentucky, which were marked by heavy-handed, and sometimes unconstitutional safety orders. The study observed the economic and health impacts of the states’ responses to the pandemic.

These were the study’s primary findings:

BCN_CovidReport_ by Breitbart News on Scribd

A Look at Lockdowns by State

Tennessee Gov. Bill Lee (R) declared a state of emergency on March 12, 2020 in response to the pandemic, and a week later, he issued the first set of restrictions focusing on groups, gyms, and restaurants. When new data emerged in April, 2020, he allowed the “safer at home” order to expire and allowed businesses to reopen again.

Georgia Gov. Brian Kemp (R) took a similar approach and defended Georgia being the first state in the nation to reopen. He also prioritized individual responsibility rather than government action.

“Georgians who are small business owners, those people who have good common sense—and we’re trusting them to use it, but if they abuse it, we will take further action. But I believe they can do it as part of this measured approach,” Kemp said, according to Fox5 Atlanta.

According to the study:

Many of these restrictions were criticized for being arbitrary or incredibly intrusive. For example, under Michigan’s stay-at-home order, buying state lottery tickets was considered essential but buying gardening seeds or cans of paint was not, despite the fact many used that time under the stay-at-home order to conduct home renovations.

“Gov. Whitmer even indicated Michiganders could receive criminal penalties for operating a motorboat, but kayaking was allowed,” it said.

Kentucky Gov. Andy Beshear (D) also took a more “heavy-handed approach.” During the early days of the pandemic, Beshear closed all nonessential businesses. He even banned Kentuckians from traveling outside the state, though the move was later ruled unconstitutional in federal court. Additionally, he reimposed bar closures after a month of allowing them to reopen, and bars and restaurants were not allowed to reopen to 50 percent capacity until August 2020, compared to April 27 for Tennessee, the study states.

“Data from January 2020 to April 2021 show that the lighter regulatory touch and quicker reopening plans of Tennessee and Georgia led to fewer job losses, lower unemployment rates, and in particular, higher labor force participation,” according to the study.

Researchers used data from the Bureau of Labor Statistic to calculate the change in unemployment numbers by state. Tennessee came in 11th place and lost 45,229 jobs. Georgia came just behind Tennesse in 12th place, with a loss of 70,399 jobs.

“The difference in results between the four states is clear, with Tennessee and Georgia having interestingly similar numbers, contrasted with Kentucky and Michigan on the other end of the spectrum,” the study found.

When researchers broke down the data based on change in state non-farm employment, the numbers, while less pronounced, still showed a clear link between lost jobs and unemployment rates. According to the study:

The main reason for these lost jobs is the historic unemployment rate in April 2020 when Tennessee’s, Kentucky’s, and Georgia’s unemployment rates all increased by roughly 300 percent (295 percent, 302 percent, and 247 percent respectively), with Michigan’s increasing by over 537 percent.

Tennessee and Georgia saw a lower spike in unemployment than Michigan, though Kentucky’s story is more complex.

Kentucky’s unemployment fell the quickest and returned only one-third higher than its pre-pandemic rate by June 2020 — Tennessee did not reach a similar level until January 2021, Georgia in February 2021, and Michigan in April 2021.

According to the study:

However, the reason for this appears to be the dramatic fall in the state’s labor force participation rate, which measures the number of people in the labor force as a percentage of the total adult population. Those who are unemployed are defined as laid off awaiting recall or actively looking and available for work. However, if someone stops looking for work, they are not calculated as part of the labor force, thus lowering unemployment rates themselves.

While all states experienced a similar short-term initial decline, Kentucky and Michigan have experienced prolonged decreases, indicating that many residents gave up trying to find work in the midst of those states’ stricter and elongated shutdowns. Kentucky’s rate tells a more interesting story. It fell precipitously in June 2020 and has shown little sign of recovering since.

Kentucky’s generous unemployment benefits have likely contributed to residents’ slow return to the workforce. Depending on a worker’s base wages, Kentuckians can receive up to $552 per week for up to 26 weeks, in addition to the recent federal supplemental benefits. This is significantly higher than Tennessee’s benefit of $275 per week for up to 26 weeks, or even Michigan’s or Georgia’s at $362 or $365, respectively (both 14 to 20 weeks maximum). 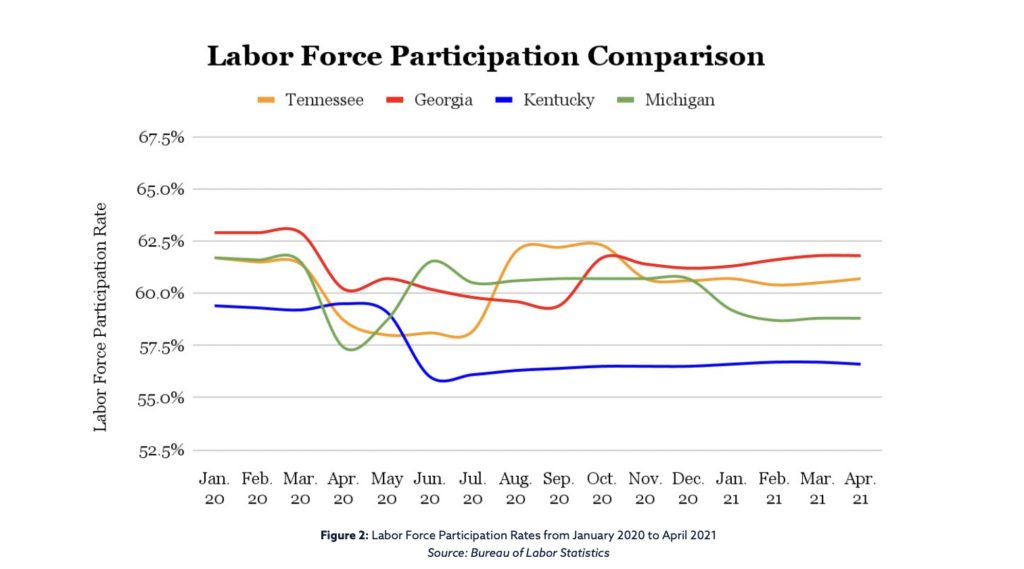 The study overall contended that the sharper decline in Kentucky and Michigan’s labor forces means “tens of thousand of residents gave up working or trying to find work during the pandemic.” It further asserted that unskilled workers in certain sectors were influenced by mandated closures of “nonessential” businesses compared to Tennessee and Georgia, which allowed businesses to stay open while following health guidelines. The study said:

Did Easing Lockdowns Cause Case Spikes?

The short answer is no. Despite the condemnation Georgia and Tennessee received for reopening, there was no evidence the states’ more measured approaches to the pandemic increased Chinese coronavirus cases. 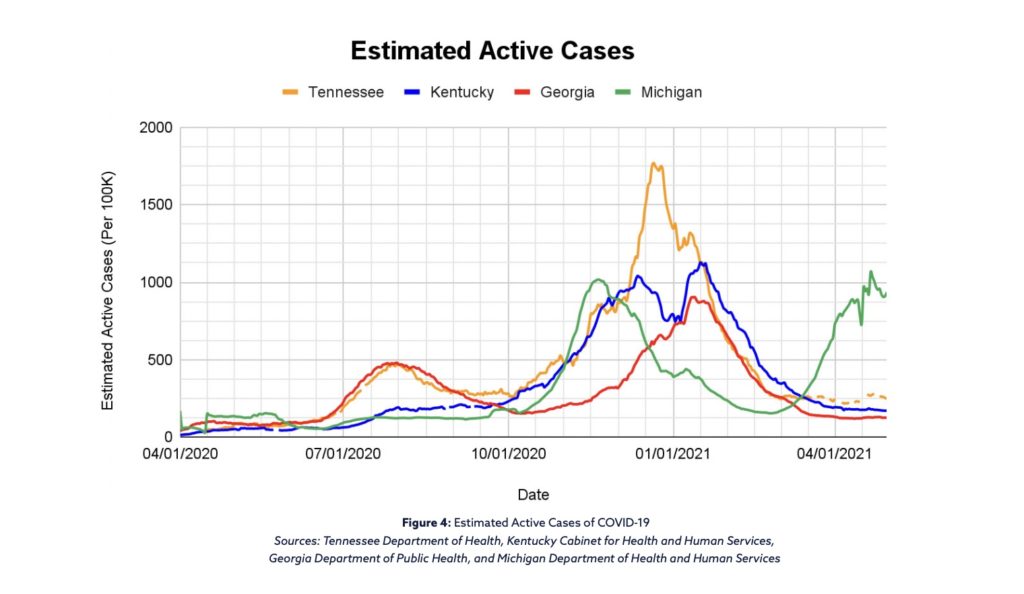 While researchers noted that Tennessee and Georgia experienced larger waves in the summer of 2020, the waves were “not tied to their reopenings, which had occurred months later.” The study further pointed out that continued restrictions in Michigan did not prevent a surge this spring compared to states that removed nearly all restrictions.

The study focused “on the time right before Tennessee and Georgia reopened their economies — around May 1 — and then focused on the five weeks afterward to “better isolate the impact of their loosened restrictions.”

The changes in the average new case rates for both Tennessee and Georgia after May 1, 2020, at a five percent confidence level were both statistically insignificant (p>.05) , meaning that there is little evidence that those states’ reopenings increased the spread of COVID-19.

In the study’s conclusion, researchers recommended policymakers approach any similar future circumstances by focusing on targeted measures that allow businesses to remain open while complying with health guidelines. They also recommended strong testing and contract tracing rather than reimposing restrictions on businesses.

“By taking a more surgical approach, Tennessee and Georgia were able to protect lives and livelihoods, and their economies suffered less and have recovered better—all with no statistical evidence of an increase in cases caused by relaxing their restrictions,” the study found.

“Policies such as focusing on safe versus unsafe rather than essential versus nonessential, allowing for increased capacity sooner, and providing certainty by not reinstating restrictions during subsequent waves of infection paid economic dividends for these two states,”according to the report.