A bipartisan majority of senators sent a letter to President Joe Biden calling on him to “immediately evacuate” Afghan allies who helped the United States while the military was in the country.

The group noted that those who helped the U.S. put their lives at risk and face “increased danger at the hands of the Taliban that has sworn retribution.”

Following the September 11 terrorist attack, the group added that the mission was to safeguard the “American homeland from terrorist attacks, eliminated Osama bin Laden, and delivered freedom and education to a generation of Afghan women and children.”

This was from the help of the Afghans, who fought alongside the military. By doing so, the Afghans’ lives are at stake with the departure of the U.S. forces.

The Taliban’s rapid ascendancy across Afghanistan and takeover of Kabul should not cause us to break our promise to the Afghans who helped us operate over the past twenty years and are counting on us for assistance. American inaction would ensure they become refugees or prime targets for Taliban retribution.

Specifically, we urge continued coordination between the Departments of State and Defense to secure and hold Hamid Karzai International Airport, including to allow for the continuation of military flights and the resumption of commercial and charter flights. We also urge your Administration to assist with the passage of individuals to the airport to safety – both those within Kabul and those outside of the capital – as well as to consider cases where Afghans fleeing quickly may not have been able to collect or gather appropriate documents.

The group added that the “extensive changes to the SIV program” were done with broad bipartisan support to protect the Afghan allies. “We did so with the goal of improving the process for applicants while maintaining our national security,” they added. 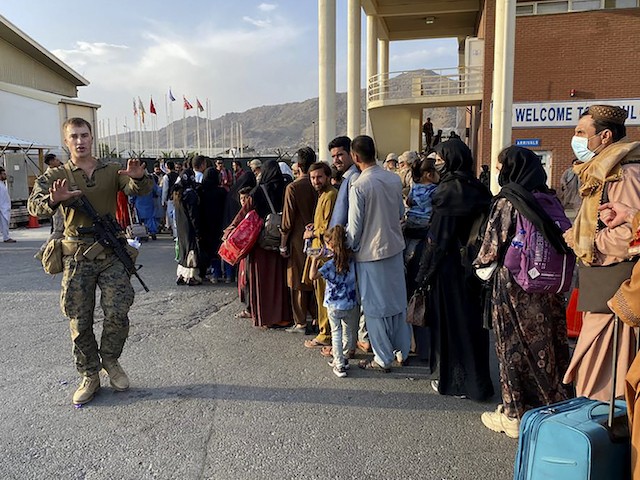 Afghan people queue up to board a U S military aircraft to leave Afghanistan, at the military airport in Kabul on August 19, 2021 after Taliban’s military takeover of Afghanistan. (Photo by Shakib RAHMANI / AFP) (Photo by SHAKIB RAHMANI/AFP via Getty Images)

They emphasized that since the legislation was signed into law three weeks ago, they are now asking the Biden administration to move “quickly to ensure it is properly and fully implemented ensuring applicants and their families can get out of harm’s way.”