When Cuomo left office on Monday, the state reported 43,400 coronavirus-related fatalities in the state. On Wednesday, that number jumped to 55,395 — nearly 12,000 more. According to the Associated Press, the data is based on death certificate data offered to the Centers for Disease Control and Prevention (CDC).

“The new governor’s move follows reporting by The Associated Press in July about the Cuomo administration’s use of a much stricter definition of COVID-19 than other populous states hit by the pandemic,” per the AP. 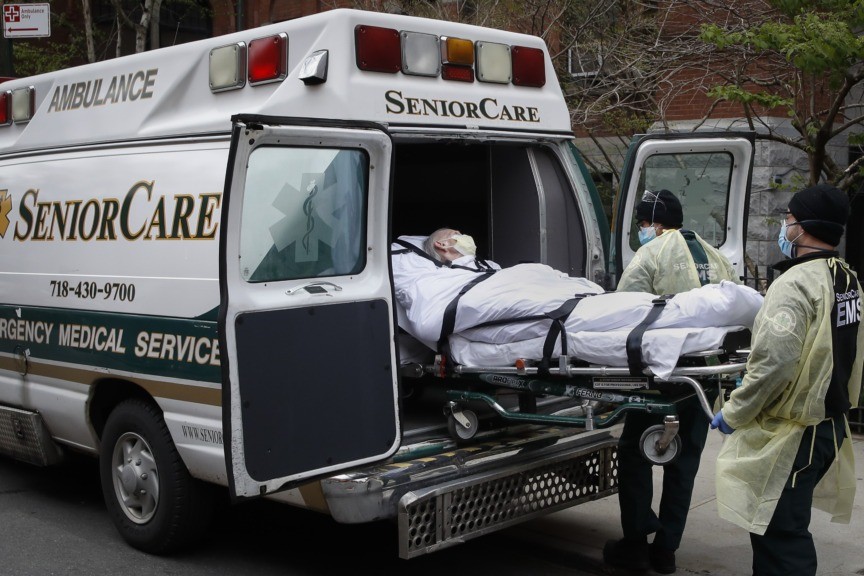 A patient is loaded into an ambulance by emergency medical workers outside Cobble Hill Health Center, Friday, April 17, 2020, in the Brooklyn borough of New York. The despair wrought on nursing homes by the coronavirus was laid bare Friday in a state survey identifying numerous New York facilities where multiple patients have died. (AP Photo/John Minchillo)

During a Wednesday appearance on MSNBC, Hochul, who has described herself as a “Biden Democrat,” touted her administration’s release of more data.

“We’re now releasing more data than had been released before publicly. So people know the nursing home deaths and the hospital deaths are consistent with what’s being displayed by the CDC,” she said.

“There’s just a lot of things that weren’t happening, and I’m gonna make them happen,” she continued before blasting Republicans, accusing their rhetoric of “killing people”:

It’s not hard to do, you just get the information out there and address them. We have to get back to that normalization of vaccinations and forget all the Republican rhetoric, which is killing people, and I’m gonna be that blunt about it. I’m sick and tired of what I’m seeing going on in other states.

Despite garnering praise from the establishment media throughout the Chinese coronavirus pandemic, former Gov. Andrew Cuomo’s administration came under fire from conservatives over his controversial March 25, 2020 nursing home directive, forcing the establishments to take coronavirus positive patients to clear up room in hospitals. That move led to thousands of deaths in New York nursing homes.

Yet, Cuomo remained obstinate and refused to take responsibility, defending the guidance during his pressers and asserting that “COVID did not get into the nursing homes by people coming from hospitals,” blaming staff and visitors.

“COVID may have been brought into a nursing home because visitors brought it in and didn’t know they were contagious because the guidance was you can only be contagious if you have symptoms —if you’re sneezing, if you’re coughing,” Cuomo said. “That turned out to be wrong.”