The Washington establishment outlet Politico claimed on Monday to have obtained classified documents stating that senior Pentagon leaders discussed plans for a “mass casualty event” at a video meeting the day before nearly 200 died in a Kabul suicide attack.

The outlet described the document as a transcript of high-level military meetings. Politico claimed Defense Secretary Lloyd Austin instructed top leaders in over a dozen departments to prepare for such an event in a meeting on Wednesday, citing the documents. It also quoted Chairman of the Joint Chiefs of Staff Gen. Mark Milley claiming to have “significant” information about a “complex attack” by a terrorist organization.

Commanders reportedly identified the Abbey Gate – where the suicide bombing occurred and Americans were gathering – to be the “highest risk.”

“I don’t believe people get the incredible amount of risk on the ground,” Politico quoted Austin as saying.

Politico did not publish the document itself but claimed to have verified its authenticity through an anonymous defense official. The Pentagon itself has neither confirmed nor denied the report at press time.

The classified notes allegedly said that a separate call occurred where Americans were making plans to close Abbey gate on Thursday, but chose to keep it open to help British allies speed up their withdrawal. The British based their evacuations out of the Baron Hotel.

At least one, though some reports claimed multiple, suicide bombings occurred at the Hamid Karzai International Airport in Kabul on Thursday, killing over 180 people, including 13 U.S. service members, and injuring dozens. Abbey gate was still open, and Americans were still processing evacuees at the gate when the attack occurred. 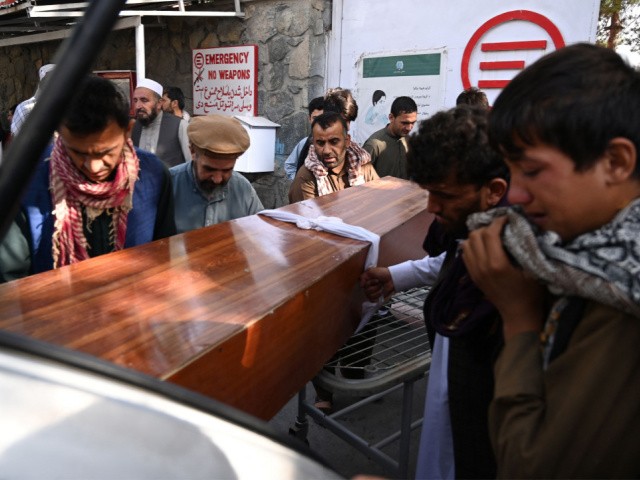 Relatives load in a car the coffin of a victim of the August 26 twin suicide bombs, which killed scores of people including 13 US troops outside Kabul airport, at a hospital run by the Italian NGO Emergency in Kabul on August 27, 2021. (Aamir Qureshi/AFP via Getty Images)

“This story is based on the unlawful disclosure of classified information and internal deliberations of a sensitive nature,” Pentagon spokesperson John Kirby said in a statement. “As soon as we became aware of the material divulged to the reporter, we engaged Politico at the highest levels to prevent the publication of information that would put our troops and our operations at the airport at greater risk.

“We condemn the unlawful disclosure of classified information and oppose the publication of a story based on it while a dangerous operation is ongoing,” he concluded.